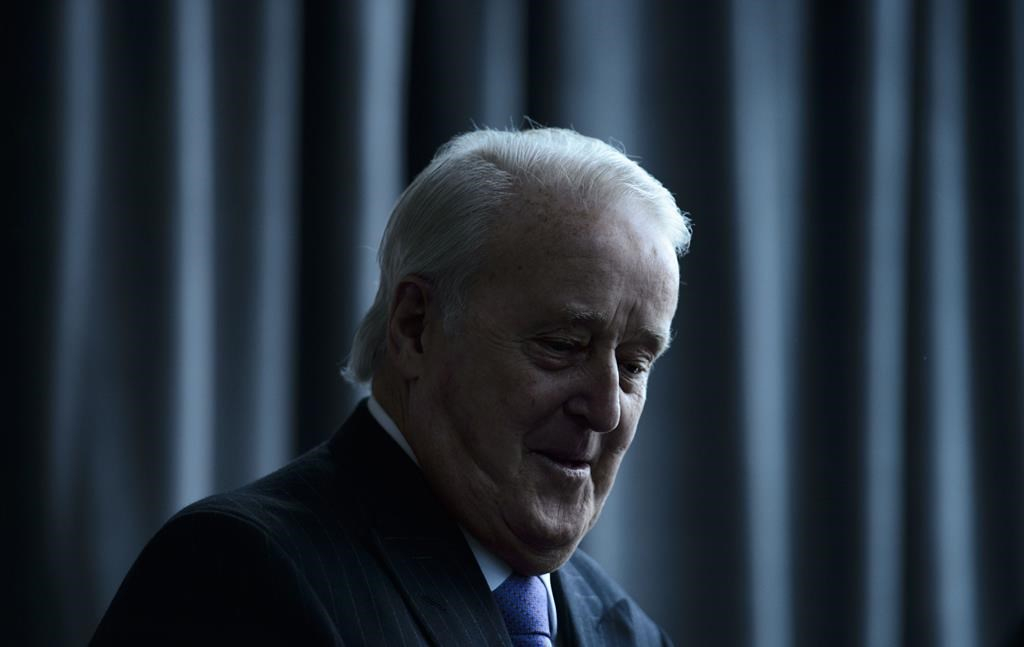 Former prime minister Brian Mulroney arrives to speak at a conference put on by the University of Ottawa Professional Development Institute and the Canada School of Public Service in Ottawa on Mar. 5, 2019. File photo by The Canadian Press/Sean Kilpatrick
Previous story
Next story

Jody Wilson-Raybould approvingly points to Brian Mulroney as a prime minister who knew better than to politically interfere with the judgment of his attorney general when it comes to criminal prosecutions.

But the former justice minister evidently didn't read Mulroney's memoirs, in which the former Conservative leader proudly recounts how he ordered his attorney general to refer a controversial murder case to the Supreme Court of Canada.

That attorney general was Kim Campbell who, according to Mulroney, did as she was told in the case of David Milgaard, who was wrongly imprisoned for 23 years for a murder he did not commit. She went on to become prime minister.

Mulroney's memoirs flatly contradict the version of events cited by Campbell in her own memoirs and repeated by Wilson-Raybould in a written submission last week to the House of Commons justice committee. The submission was intended to bolster her contention that she faced inappropriate pressure last fall from Prime Minister Justin Trudeau, his top aides and others to stop the criminal prosecution of Montreal engineering giant SNC-Lavalin.

As part of her submission, Wilson-Raybould included transcripts of text messages she exchanged with her chief of staff, Jessica Prince, following a Dec. 18 meeting with Trudeau's chief of staff, Katie Telford, and principal secretary Gerald Butts.

Prince relates that the duo tried to persuade her that Wilson-Raybould should seek advice from a retired Supreme Court justice as to whether she could review a decision by the director of public prosecutions, who had refused to negotiate a remediation agreement with SNC-Lavalin rather than pursue prosecution on bribery charges related to contracts in Libya. Prince says she repeatedly told Telford and Butts that would amount to "interference."

In the course of that discussion, Prince says Butts raised the Milgaard case.

"Gerry told some story about how Mulroney met with David Milgaard's mom, walked into the cab(inet) room and told Kim Campbell she had to fix it. She gave him all these AG reasons why she couldn't interfere but then she ultimately did what Mulroney wanted and was right," Prince says.

After asking for more details about the reference to Milgaard, Wilson-Raybould then asks Prince to send her Campbell's cell phone number, commenting "Good grief — this is absurd."

Wilson-Raybould met with Campbell the following day at a Vancouver coffee shop.

"Needless to say, she categorically denied what Mr. Butts had said and was quite offended and outraged by the comments. She adamantly denied the characterization not only of her as the attorney general but of her former boss, Prime Minister Mulroney," Wilson-Raybould wrote in her submission.

"She further reflected — as she did in her memoirs (1996) — that Brian Mulroney 'was much too good a lawyer to intervene improperly in the matter. He never breathed a word about the Milgaard case to his AG, nor did anyone in his office ever attempt to influence her handling of the case.'"

Wilson-Raybould did not mention that Campbell also wrote in her memoirs that Mulroney had "blindsided" her by meeting with Milgaard's mother, Joyce, in 1991. She wrote that she was assured the two discussed only Milgaard's living conditions in prison and not his application for a review of his conviction for the 1969 rape and murder of a Saskatoon nursing student, which Campbell had rejected.

Nevertheless, Campbell termed it an "inappropriate intervention" and suggested it was politically motivated. She wrote that Mulroney's chief of staff, Hugh Segal, told the British Columbia Conservative caucus that the prime minister's meeting with Joyce Milgaard was "brilliant" and the kind of thing he needed to do more to burnish his image in the run-up to the 1993 election.

Nor did Wilson-Raybould mention, or appear aware of the fact, that Mulroney completely contradicted Campbell's version of events in his own memoirs, published in 2007.

He recounted how he was "disturbed" by the way in which Campbell had "brushed off" Joyce Milgaard, having told her during a public encounter: "Madam, if you wish to have your son's case dealt with fairly, please do not approach me." He was "privately furious with her" for rejecting Milgaard's application for a review of his case.

Mulroney provided a condensed transcript of his meeting in Winnipeg with Joyce Milgaard, during which he said he was "extremely prudent" in his choice of words because he knew they were being recorded. At one point, he told her that Campbell is going to look at "new information that's come in" and that he's going to be talking to her when he gets back to Ottawa about her son's case.

When he got back, Mulroney wrote, he had Campbell summoned to his parliamentary office where, "because of the sensitivity of the matter, I met with her alone."

"'The matter has been reviewed by the department and I have conveyed our decision,' she told me.

"My tone was firm and my words unequivocal. She understood and changed her tack quickly.

"'Prime Minister,' she answered, 'If this is the case, may I make the announcement myself?'"

The top court ultimately recommended Milgaard's conviction be set aside. Campbell ordered a new trial but the government of Saskatchewan refused to do so, issued a stay of proceedings and freed Milgaard in 1992. Five years later, DNA evidence from the victim's clothes cleared Milgaard and led to the arrest and eventual conviction of serial rapist Larry Fisher.

In a series of posts Sunday on Twitter, Campbell insisted Mulroney's version of events is not true and defended her handling of the case.

"I didn't read Mr. Mulroney's memoirs. Guess I should have!" she tweeted.

"While Mr. Mulroney apparently insists he did something he didn't in the Milgaard case, I should point out that this was not a prosecutorial decision but an application for the Royal Prerogative of Mercy (And I acutally did get advice from a retired SCC justice)."

Butts and the top public servant, Michael Wernick, have testified that no improper pressure was exerted on Wilson-Raybould over the SNC-Lavalin case. They have maintained they only wanted her to get a second opinion on the advisability of overriding the public prosecutor's decision, as allowed by law.

Wilson-Raybould's written submission, released Friday, supplements her nearly four hours of oral testimony last month. She believes she was moved out of her dual role as justice minister and attorney general to Veterans affairs in a mid-January cabinet shuffle as punishment for refusing to intervene in the SNC case. She resigned from cabinet a month later.