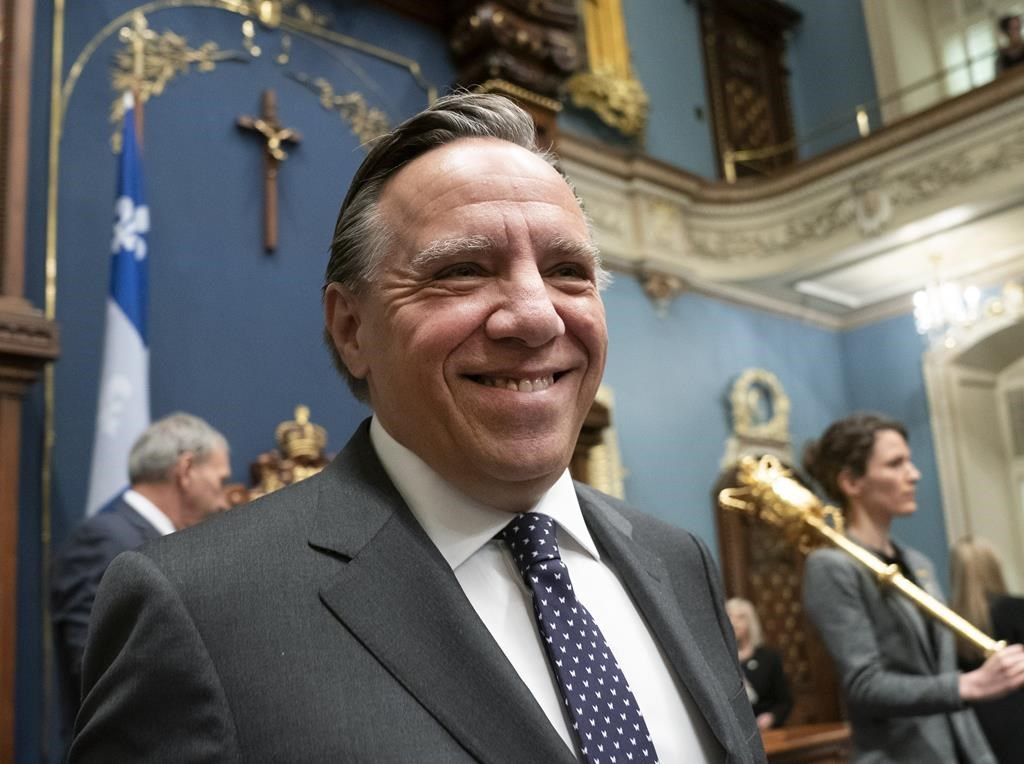 Quebec Premier Francois Legault walks in as his government is about to table a legislation on laicity of the state, on Thursday, March 28, 2019 at the legislature in Quebec City. Photo by The Canadian Press/Jacques Boissinot
Previous story

The Quebec government is taking a moderate approach to secularism that does not violate freedom of religion, Premier Francois Legault said Sunday as he defended his government's controversial bill to ban the wearing of religious symbols for some public sector employees.

Legault also defended his government's use of the notwithstanding clause to block court challenges, calling it a "legitimate tool" that has been used by other Quebec premiers.

In a three-minute video released to his social media channels, Legault said Bill 21 provides a much-needed framework around an ongoing social debate.

"Secularism is not contrary to freedom of religion," he said. "Each can practice the religion of their choice. But we have to set rules, and that's what we're doing."

The law would also require a wide array of public servants to exercise their functions with their faces uncovered, and people who want to receive public services must also show their faces when necessary for purposes of identification or security.

The Coalition Avenir Quebec's legislation invokes the notwithstanding clause, meaning the bill would apply despite certain provisions of the Canadian Charter of Rights and Freedoms.

Legault defended that choice on Sunday, citing the need to avoid what he called a "long legal battle."

He said it was time to settle the debate over secularism.

"In Quebec, it's been a long time since we've decided to separate religion and state, and it's over 10 years that we've been debating religious symbols," Legault said.

"It's time to set rules, because in Quebec that's how we live."

Legault described the approach as a compromise, pointing out that his government included a grandfather clause that would exempt current employees from the religious symbols restrictions — as long as they remain in the same job.

And he reiterated arguments previously made by Immigration Minister Simon Jolin-Barrette, who said Bill 21 is an affirmation of Quebec's distinctiveness and its decades-long drive to separate church and state.

Opposition to the bill tabled Thursday has been swift, with critics denouncing it as discriminatory towards women as well as religious minorities such as Muslims, Jews and Sikhs.

Groups including Amnesty International have said the bill contravenes the Universal Declaration of Human Rights, which guarantees freedom of thought, conscience and religion.

Women's groups have pointed out Muslim women wearing a hijab will bear the brunt of the law's impact, and expressed concern they could face increased stigmatization and even violence.

Prime Minister Justin Trudeau and Montreal Mayor Valerie Plante have both spoken out against the bill, with Trudeau saying it could open the door to discrimination.

At least two Montreal school boards and some municipal officials have said they won't enforce it. Quebec Solidaire, which holds 10 seats in the provincial legislature, decided on Saturday to reverse its previous position and declared itself in favour of granting public servants free reign to wear what they want.

It is not yet clear exactly what constitutes a religious symbol under the legislation, nor what the consequences will be for failing to comply.

Legault acknowledged the controversy on Sunday, but maintained he'd done the right thing.

"Some will say we're going too far,

others will say it doesn't go far enough," he said. "In reality, this bill is moderate, as Quebecers are."