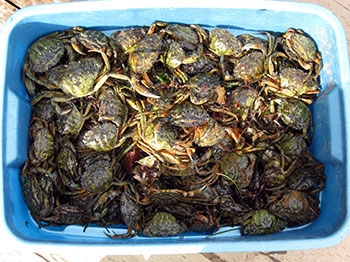 Green crab have been spreading along Canada's Atlantic coast since the 1950s. Photo courtesy of Fisheries and Oceans Canada
Previous story

The federal government is doing a poor job of preventing an invasion of aquatic species that could wreak havoc with Canada’s economy and ecosystems, says a new audit released on Tuesday by Parliament’s environment watchdog.

The audit was among a series of reports released by Julie Gelfand, the federal environment and sustainability commissioner, on a range of issues including fossil fuel subsidies and water pollution form mining companies.

Her report said that inadequate efforts to stop invasive species could have significant consequences. In one recent example, Canada and the U.S. have had to set aside a combined total of $40 million in the 2019-2020 fiscal year to control a species called sea lamprey that is affecting fisheries in the Great Lakes, the report said.

Invasive species can also damage hydroelectric and drinking water filtration facilities, pollute beaches and docks, damage tourism and have profound social and cultural impacts on Indigenous peoples and communities that rely on water resources, the report noted. The report added that the risk of invasive species is also increasing due to climate change.

Officials from the Department of Fisheries and Oceans (DFO) told auditors that they respond to threats in an ad hoc manner, making decisions after reported sightings.

“We found that this response style could be slow,” the report said. “Delayed response times can allow a species to spread further, making it costlier and more troublesome to control or eradicate.”

For example, the report noted that green crab, which has been spreading across Canada’s Atlantic coast since the 1950s, were reported off the Island of Newfoundland in 2007, but DFO “had no response plan ready and took no action for almost a year while it worked with stakeholders to decide how to respond,” Gelfand’s report said.

“It started trapping green crab the following year but was not successful in eradicating the species,” said the report. “Green crab is now established in this area.”

The audit found one major exception, noting that the government has taken “significant steps” to prevent Asian carp, an invasive species that is now affecting the Mississippi River, from entering the Great Lakes.

The report said that prevention is cheaper than having to deal with an established invasive species, but it noted that the Canada Border Services Agency was also failing to enforce regulations to prevent an invasion of aquatic species at the country’s international borders.

These shortcomings were identified despite international commitments that Canada has made to protect biodiversity that go back to the 1992 Earth Summit in Rio de Janeiro.

Both the agency and the fisheries department agreed with the recommendations and said they are prioritizing action to fix the problem.

DFO has also specially committed to drafting a national response strategy before the end of 2019 that will guide policies in the regions.

In a joint statement issued following the report's release, Fisheries Minister Jonathan Wilkinson and Environment Minister Catherine McKenna noted that the government had announced $43.8 million in spending over five years to tackle the "dangerous threat" that aquatic invasive species present to both the environment and economy.

"This federal funding led to the creation of the National Program on Aquatic Invasive Species," the ministers said in their statement. "Through this program, Fisheries and Oceans Canada (DFO) is working in close collaboration with Canada Border Services Agency to develop and implement procedures, tools and training to ensure border officers are well equipped to fulfill their responsibilities under the AIS (Aquatic Invasive Species) Regulations."

Editor's note: This article was updated at 12:01 ET on April 2, 2019 with new comments from Fisheries Minister Jonathan Wilkinson and Environment Minister Catherine McKenna. It was updated again at 4:15 p.m. ET to correct that Canada and the U.S. have had to set aside a combined $40 million in the 2019-2020 fiscal year to control a species called sea lamprey.