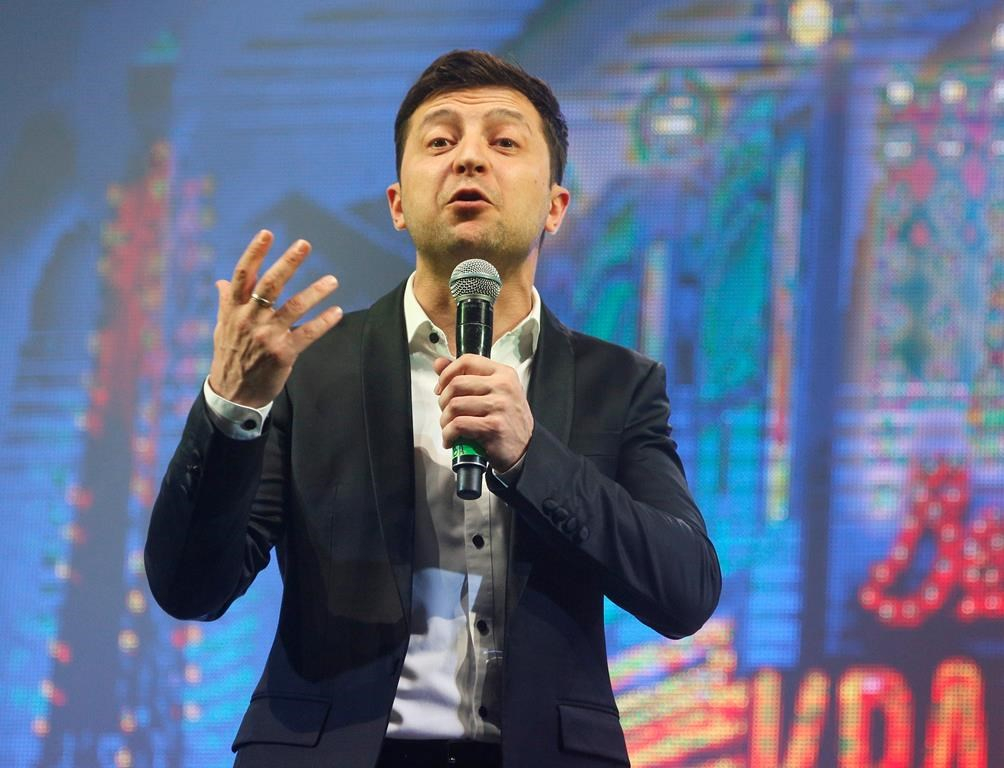 In this file photo taken on Friday, March 29, 2019, Volodymyr Zelenskiy, Ukrainian actor and candidate in the upcoming presidential election, hosts a comedy show at a concert hall in Brovary, Ukraine. File photo by The Associated Press/Efrem Lukatsky
Previous story

A former Canadian foreign minister monitoring the Ukraine election says Sunday's ballot was free and fair but suffered from Russia blocking voters in areas of the country it controls.

Lloyd Axworthy, who led a team of 160 independent Canadian monitors, says Russian forces kept more than a million voters from the polls in Ukraine's Crimea region and its eastern regions.

Russia annexed Crimea in 2014 — a seizure most of the world has not accepted — while Russian-backed rebels have stoked separatism in eastern Ukraine.

The Sunday vote was seen as a test of Ukraine's ability to stand up to Russian meddling, especially in cyberspace.

The country's national police chief recently told The Canadian Press the election would be a major test of its democracy and that his force was prepared to defend itself.

Axworthy says Canada has a lot to learn from Ukraine so Canada can better safeguard the integrity of its October federal election from foreign meddling.

"They have a pretty good game plan. It's really based on prevention. They brought some technology in that they think is really giving them a chance to do the kind of monitoring that's required," Axworthy said in interview Monday from Kyiv.

The Organization for Security and Co-operation in Europe, which mounted a large multinational observer mission that was separate from Axworthy's but also included Canadians, vouched for the integrity of the election, even though it criticized procedural violations and said there were indications that state resources were misused in the vote.

The election was marred by allegations of widespread vote-buying. Police said they had received more than 2,100 complaints of violations on voting day alone, in addition to hundreds of earlier voting-fraud claims, including bribery attempts and removing ballots from polling stations.

The OSCE said about five million people have been taken off Ukraine's voter registry as the government was unable to organize the presidential vote in Crimea or in the separatist-held east.

Axworthy said the fact Ukrainians were prevented from voting in the Russian-controlled areas was a grave human-rights violation.

"Coming across that border hasn't been easy. There's lots of reports of intimidation by the Russians and their satellites in these territories to restrict the vote," he said.

The early result was a surprise to many, with a comic actor with no political experience leading strongly, according to results released Monday.

With nearly 92 per cent of the polls reporting, Volodymyr Zelenskiy had 30 per cent, while incumbent President Petro Poroshenko was a distant second with almost 16 per cent of the vote. Ex-prime minister Yulia Tymoshenko ranked third at 13 per cent. The top two candidates advance to a run-off on April 21.