By Richard Littlemore | News | April 2nd 2019
#978 of 1357 articles from the Special Report: Race Against Climate Change 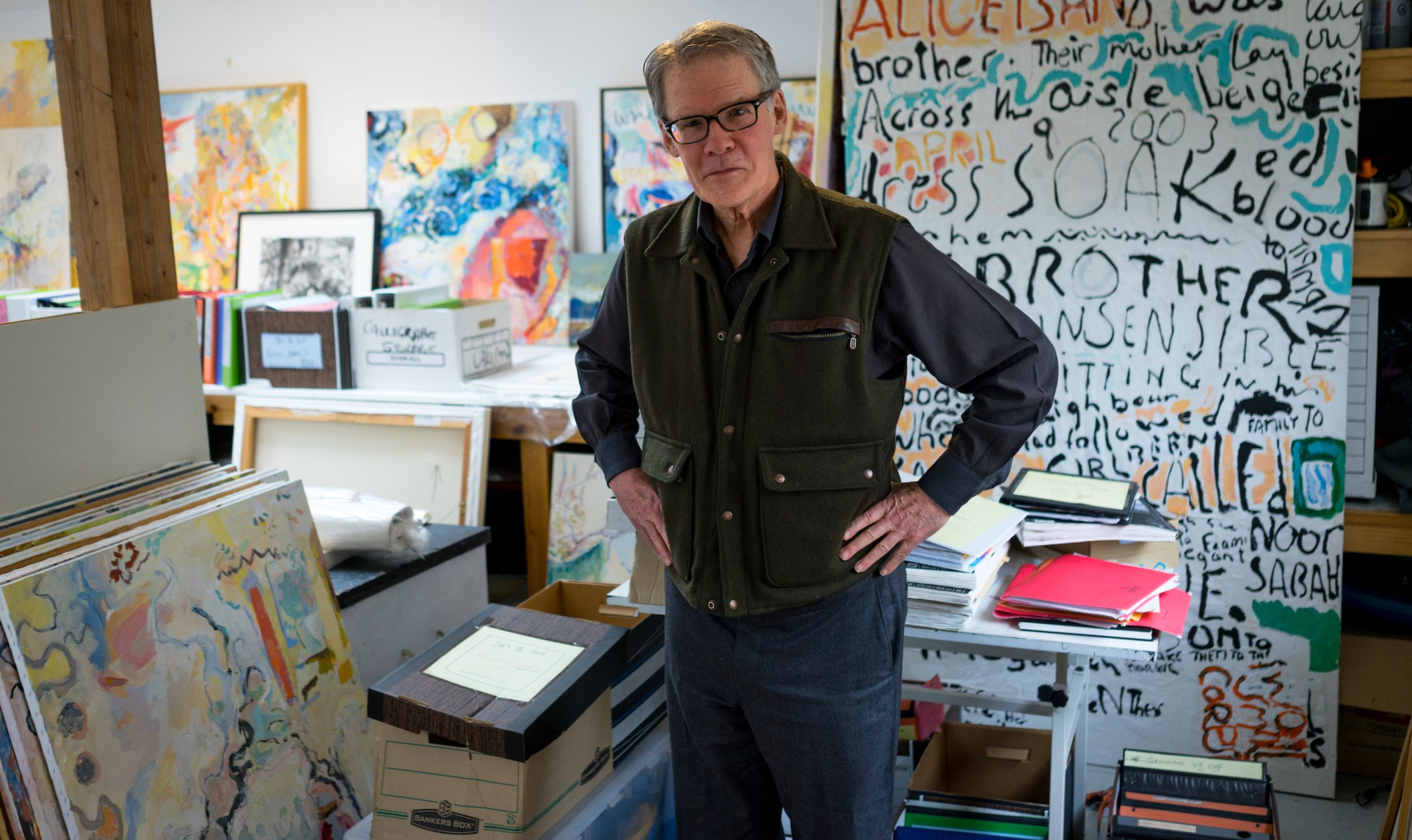 In his 35-year career as a leading civil litigator, David Gooderham was accustomed to entering and leaving B.C. courtrooms in the full regalia of the barrister: a waistcoat, wing-tip collar and gown.

On the rainy second Monday in March, he found himself shuffling out of an unfamiliar black steel door on the back side of the Vancouver courthouse, holding his pants up with one hand and clutching other worldly possessions – including his belt and shoelaces – in “a plastic bag that was big enough to be a navigation marker.”

Hours earlier, Gooderham had been transformed from a former lawyer and servant of the court to a convict, having been sentenced to 28 days in jail for criminal contempt of court for his protest against the Trans Mountain pipeline. He knew it was coming. B.C. Supreme Court Justice Kenneth Affleck had refused in December even to hear Gooderham’s defence. The March 11 conviction and sentencing was a formality.

In an interview last week, Gooderham said he really hadn’t known what to expect – an intimidating tour through the underbelly of the otherwise ostentatious Vancouver courthouse.

According to a spokesperson from the B.C. Prosecution Service, Gooderham and his co-accused Jennifer Nathan are among the more than 200 protesters who have been arrested for blocking work on the Trans Mountain pipeline from the oilsands in Alberta to tidewater in the Vancouver harbour. (There have actually been 232 arrests, but some people have been arrested more than once.)

In their case, Gooderham and Nathan sought to plead a “defence of necessity,” alleging that pipeline-driven oilsands expansion so advances the threat of climate change that, in legal terms, we are all in “imminent peril.” They also argue that they have exhausted all lawful avenues to challenge the wisdom of Canada’s path, or to scrutinize the climate implications of the Trans Mountain project. Justice Affleck declined even to hear their evidence, and yet ruled categorically that the peril is not imminent – that there is “a contingency that takes [the feared] changes outside of ‘virtual certainty’ and into the realm of ‘foreseeable or likely.’”

Gooderham and Nathan immediately launched an appeal. And with an appeal in motion, Gooderham hoped he would be released on bail immediately. Yet, even before hearing that he might have to begin serving his whole 28-day sentence right away, Gooderham said he was taken aback by what came next.

Although he had spent much of his distinguished legal career in B.C. courtrooms, Gooderham said he had never gone “behind the little door where prisoners go.” Immediately through that door, he said, the plush carpet and wood veneer of the judge’s corridor gave way to concrete block and steel. The 73-year-old was told to face the wall, had his hands cuffed behind his back, and was led to a “freight elevator that descended to the bowels of the building, perhaps even below the parkade.”

He soon found himself in a holding area where his minders relieved him of all personal effects, including the shoelaces and belt. They made him choose between keeping his shirt or his undershirt because, notwithstanding how chilly he was to find his solitary, spartan cell, he was not allowed to have both.

Gooderham thought the next bit would take about an hour. His lawyer, Martin Peters, went directly to the B.C. Court of Appeal to make an application in the judges’ chambers for Gooderham’s release. But Peters was soon standing before Gooderham with the unhappy news that Appeal Court Justice Harvey Groberman had said that he didn’t think Gooderham’s appeal was likely to succeed, in which circumstance, he didn’t find bail appropriate. That said, the judge left the door ajar by saying he might reconsider if Gooderham appealed to reduce the length of his sentence, rather than limiting the appeal to a challenge of Affleck’s refusal to hear the defence of necessity.

So, with Gooderham’s reluctant blessing, Peters returned to expand the scope of the appeal, but had to wait until 2 p.m., leaving Gooderham to contemplate the locked door as a metaphor for government refusal to permit a full and open inquiry into the implications of the Trans Mountain pipeline. Alone in the cell with no phone, Gooderham said, “You find yourself trying to read the graffiti, teasing out the meaning” of messages that had been scraped into the painted concrete blocks even though every previous occupant had also been stripped of everything sharp. “The only legible graffiti was: ‘Death before dishonour.’”

If that was melodramatic, Gooderham said he really was struck by the experience. “This is all designed to depersonalize. The treatment is aimed at characterizing [protesters] as people of little worth, even though these are just people who sat on chairs” on the road to the Trans Mountain work site on Burnaby Mountain.

The essential civility of protesters and their respectful response to both enforcement officials and the courts is central to a second Trans Mountain-related action headed to the B.C. Court of Appeal. In an appeal brought on behalf of 18 other Trans Mountain protesters, lawyers Chilwin Cheng and Oliver Pulleyblank challenge Affleck’s decision to convict those defendants of criminal contempt, rather than the less stigmatizing civil contempt, regardless that protesters had acted with civility and were clearly not trying to bring the law or the court into disrepute.

“In many cases civil disobedience causes no injury to the justice system” but rather serves only to emphasize the Court’s authority,” the lawyers argue in a factum.

In his case, Gooderham said the reason he didn’t originally appeal the length of his sentence was because he didn’t want to be seen ducking the consequences of his actions.

In the factum, Cheng also quoted late civil rights activist, Martin Luther King, who wrote from a Birmingham, Alabama jail in 1963: “I submit that an individual who breaks a law that conscience tells him is unjust, and who willingly accepts the penalty of imprisonment in order to arouse the conscience of the community over its injustice, is in reality expressing the highest respect for law.”

Cheng and Pulleyblank assert that Affleck elevated their offence from civil to criminal on the basis that their protest had occurred in public – as proved by the presence of television cameras.

In an interview last week, Cheng said the decision to call the contempt “criminal” has a damaging and lifelong effect. Affleck has ruled that the names of those convicted of these contempt offenses should not be included in provincial and federal police databases. But the convictions are still recorded in the court registry, so if defendants are ever asked if they have been convicted of a crime, they must answer yes.

Gooderham, who still faces a month in jail if his appeal fails, has also argued that his actions are actually a tribute to his faith in the courts. And if there has been damage to the reputation of the legal system, he said it has been inflicted by the federal government, not the protesters. In his submission before sentencing, he wrote: “People respect and honour the law because they trust and have confidence in its process.”

Yet, the federal order-in-council approving the Trans Mountain pipeline claimed that the project was consistent with Canada’s commitments under the Paris Agreement on climate change, even though no previous government reports substantiated that claim. The National Energy Board specifically refused to consider project impacts on national and global emissions. And when the government finally ordered an “upstream emissions assessment,” it blocked individuals outside government from providing input or questioning the experts and the decision-making process.

In Gooderham’s words, this amounted to “rigging the process,” by which intervention the government “cast off the prudent and cautious law-sanctioned rules that [traditionally] allowed us to have confidence in their findings and decisions.” His conclusion, and the basis of his protest: “The Order [in Council], therefore, cannot compel our respect.”

Asked for federal comment, a spokesperson for the Minister of Natural Resources Canada said they cannot speak directly to a case before the courts.

The Cheng/Pulleyblank appeal is expected to be heard May 27, 2019. No date has been set for the Gooderham appeal, but it will likely not be heard before the fall sitting of the B.C. Court of Appeal.

The law is an ass.

The law is an ass.

I was also arrested once- at

I was also arrested once- at the Tar Sands Action climate protest on Parliament Hill some years ago. A retired English teacher, I was intimidated enough to ask the indigenous drummers on the Hill to "drum me over". They helped me! I stepped over a little ladder and on the other side, I thanked two officers for the help I or my family had received from police a few times in my life. We had a respectful and friendly encounter - they were never my enemies. As we walked to process me, I glanced up to the roof and saw a single human figure up there- and expressed concern that he could slip and fall. The officers passed worried glances between themselves, and I looked again: a sniper positioned up there was what I saw. I then privately reflected on how emblematic to me was this situation with Stephen Harper as Prime Minister.

Judge Affleck, a Harper appointee, was previously an advocate for Big Tobacco, and Asbestos. The extraction industry has used the same tactics as the tobacco industry to deny harm. In fact, we are facing extinction and need to rebel! Please read the science, then grieve, then act!

So. This story matches the

I didn't know that Judge

I didn't know that Judge Affleck had this history of advocacy for Big Tobacco and Asbestos. His intransigent attitude on the bench toward protesters is, in my mind, explained by his own previous behaviour as an advocate for these two discredited industries. Is he still fighting that fight?

Thanks for this article. The

Thanks for this article. The actions of Gooderham and others are admirable. This is a difficult time in Canada. We are being forced to see clearly how deeply our country is in the grip of large corporations. Especially (but not exclusively ) fossil fuel companies. People like Gooderham who are willing to stand in their way, at considerable cost to their own comfort, give us all hope. I’m grateful.

Kenneth Affleck was counsel for T & N Plc, a U.K.-based asbestos company, trying to help them keep records in Quebec from being shared with British Columbia in a court case here regarding the asbestos-related illness of a former T & N worker. T & N lost in Canada's Supreme Court, on appeal from the B.C. Court of Appeal.

Facing jail over Trans Mountain protest, lawyer asks court to consider that topic 'no one wants to talk about'