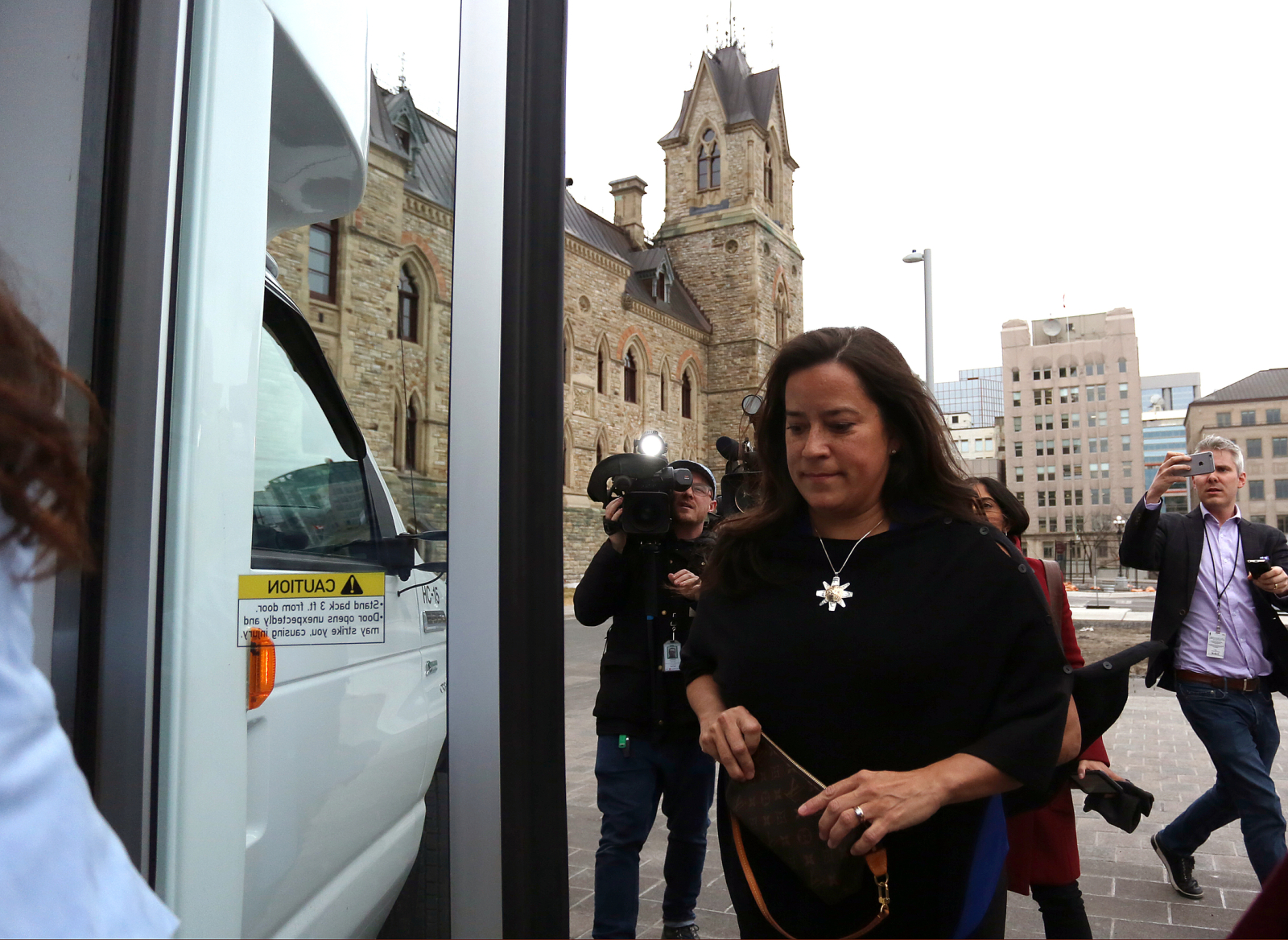 Former Attorney General Jody Wilson-Raybould leaves West Block after a meeting with the Prime minister prior to an emergency meeting of the Liberal caucus to announce her's and Jane Philpott's explosion from the party on April 4. Photo by Andrew Meade
Previous story
Next story

As federal Liberal MPs prepared to debate whether former attorney general Jody Wilson-Raybould and former health minister Jane Philpott should stay in their caucus, Wilson-Raybould wrote to them to explain her actions in the SNC-Lavalin affair and why she still wants to be a Liberal MP. Here is the text of her letter:

I am writing to all of you, members of the Liberal Caucus, to share some of my thoughts and observations about recent events and what they mean for us as a Party. I hope they are helpful to you.

There were many reasons I ran for the Liberal Party of Canada in 2015, including commitments on addressing climate change, the challenges of our criminal justice system, Indigenous reconciliation, and building an economy that supported all Canadians. For me, and I believe for our Party, all of these progressive policy commitments had underlying them a firm belief in the need for a transformation in our political culture, and the pursuit of a more responsive, representative, and less partisan approach to the governing of the country.

This commitment to a changed politics was not just about specific policies, such as proportional representation, but about every aspect of how we organize ourselves to govern, and the responsibilities that each of us carry. We committed to break old and cynical patterns of centralizing power in the hands of a few unelected staffers, the marginalization of hundreds of Members of Parliament with expertise and insights to offer, and the practice of governing in the shadows, out of sight of Canadians. I believed we were going to uphold the highest standards that support the public interest, and not simply make choices to create partisan advantage.

As part of committing to this transformative and progressive path, we were also committing to a government and caucus that represented all Canadians. Diverse and inclusive, our Caucus was to be a microcosm of Canada — not just geographically, but demographically. Indeed, I believe we understood that to build a stronger Canada, we needed to reflect that Canada. This includes the challenges, opportunities, tensions, and insights that arise when seeking to forge a common path and understanding in a context of real diversity and difference. This is a vision that reflects the future. Young people identify in dozens of different ways before they identify with a political party — and they privilege diversity of experience, background, and belief and upholding the experiences of all, over simply following the paths laid out with those who claim to hold power.

I still believe all of these things as I know all of you do, too. I believe it is what the country needs, and I believe our collective future well-being as a country demands action on such a vision. And indeed, one of the main reasons I had no hesitation to stand up for what I believed to be right and necessary for the country since September 2018 regarding SNC-Lavalin was because of my belief in that vision.

In 2015, I believed the Liberal Party held such a vision, and I still believe the Liberals can and must advance such a vision. I do believe fundamentally that the Prime Minister also still shares this vision.

Now I know many of you are angry, hurt, and frustrated. And frankly so am I, and I can only speak for myself. I am angry, hurt, and frustrated because I feel and believe I was upholding the values that we all committed to. In giving the advice I did, and taking the steps I did, I was trying to help protect the Prime Minister and the government from a horrible mess. I am not the one who tried to interfere in sensitive proceedings, I am not the one who made it public, and I am not the one who publicly denied what happened. But I am not going to go over all of the details here again. Enough has been said.

Growing up as an Indigenous person in this country I learned long ago the lesson that people believing what they wish about you does not, and cannot ever, make it the truth — rather than letting authority be the truth, let the truth be the authority. Indeed, if I had succumbed to interpreting the beliefs of others to be the truth, I never would have been able to push forward in the face of the racism and misogyny that far too many Indigenous women, and others, still experience every day.

Ultimately the choice that is before you is about what kind of party you want to be a part of, what values it will uphold, the vision that animates it, and indeed the type of people it will attract and make it up.

If indeed our caucus is to be a microcosm of the country it is about whether we are a caucus of inclusion or exclusion; of dialogue and searching for understanding or shutting out challenging views and perspectives; and ultimately of the old ways of doing business, or new ones that look to the future.

As I have stated recently to the constituents of Vancouver Granville, it has been my great privilege to serve as their Member of Parliament over the past three and a half years and to continue to have their confidence. With the support, guidance, and participation of Canadians our government has accomplished much — and, of course, there is important work yet to be done. My nomination has been confirmed and it is my intention to stand for re-election as the Liberal candidate for the 2019 federal election and to continue with this work.

Member of Parliament for Vancouver Granville

Thank you, Jody Wilson-Raybould, for speaking truth to power!

From the public testimonies

From the public testimonies and communications made public, it appears that JWR chose her interpretation of events without respecting the interpretation of events of those around her - in her caucus, Ministerial personnel, the Privy Consul, PMO staff and the PM - all of whom we have no evidence to suggest have other than the public interest as their intent. Her inflexibility regarding providing for outside legal review of the DPP decision (in the absence of providing any clarifying communications about the context/factors considered in denying an available policy tool that provided for mitigating harm to employees, etc.) ...or of her decision which could have remained open to new information/context right up until trial...showed either ego or retribution over other conflict she had had with the PM. It certainly showed disrespect to the potential 9,000 Canadians/their families/communities that could be negatively impacted and to the PM/ the caucus for the certain political damage her unnecessary position on the issue would cause. Such actions did not advance the best interest of Canadians or the party's agenda and therefore she no longer was an asset to this administration in governing in our best interests.

“I am not the one who tried

“I am not the one who tried to interfere in sensitive proceedings, I am not the one who made it public, and I am not the one who publicly denied what happened,” ...
Ms. Jody Wilson-Raybould,
former Minister of Justice and Attorney General
April 2, 2019
She threatened the PM that if he moved her out of MoJ/AG position, she would use his interest in the SNC-Lavalin case to cause political damage. Then she leaked her story to the Globe and Mail as the reason why she was moved. The PM denied that was the case, as he had previously told her to her face.
Her entire statement is untrue.

I am surprised at the 2

I am surprised at the 2 comments written by the 2 people. First of all, if we are talking about the present government's transparency, when the Justice Committee investigating the SNC Lavalin case was a liberal committee, transparency flew out the window. As they say, "the fox was looking after the hen-house." The second problem is the original contract for government jobs between SNC and the Trudeau government made soon after his election. Face had to be saved, since the is no other company on the list on this contract according to the National Observer. Political interference is clear to anybody, who reads about SNC's connection to the liberals.
It is a shame Trudeau did not stood up at the beginning and admit his mistake of politically interfering. The so called "golden boy" refused to swallow the bitter pill of honesty and created a crisis. Yes, the trust was broken between him, his caucus and JWR, and also between the liberals and the Canadian people, at least those who live a principled life.
Thank you JWR to bringing to our attention and thanks to your colleague, that when a government and their leader feels they are strong enough to do whatever they want, there are still some who will try to upheld the principle on which they were elected.

COOP OF CHICKENS
The Liberal caucus was too chicken to hear the arguments of two of their accused caucus colleagues...These ‘still caucus members ‘ should have be given an opportunity to discuss these serious issues/allegations in caucus . Such a meeting may have revealed greater rifts than so far realized…
The last time we saw Justin in the ring he won handily…this time he suffered at best, a split decision. Many wait for the ultimate October rematch?

When someone leaked a story

When someone leaked a story to the Globe and Mail alleging that the Attorney-General has been improperly pressured to intervene in the SNC -Lavalin case, I believe Wilson-Raybould had a duty to denounce the leak, inform the press that this is an internal matter and as Attorney General she will make an independent decision on any such matters. She failed to do so.