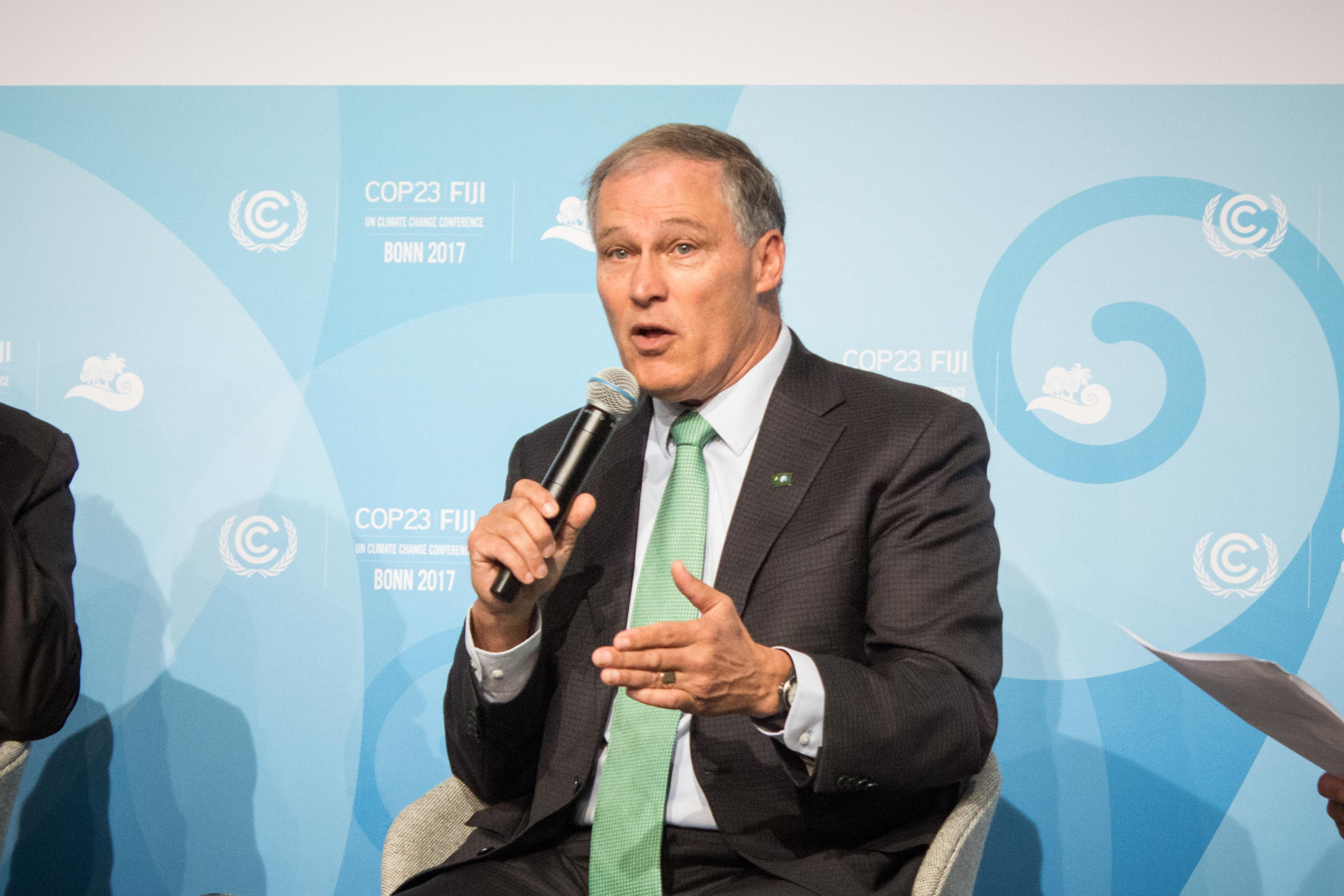 When Washington Gov. Jay Inslee launched his long-shot presidential bid, he tried to distinguish himself from the pack of Democratic hopefuls by arguing that climate change was his top priority and should be the single most important issue for the next president. Anyone hoping to contain warming below catastrophic levels can’t simply treat it as a laundry list item, he argued, because of the widespread economic and global decisions required to bring down emissions and adapt to the impacts. Working to address climate change had to be the first priority of the next president—and not treated as an environmental niche—because it affects everything: economic inequality, racial justice, and health care.

But in the past few months, addressing climate change has become a higher priority for the Democratic base, and every Democratic presidential hopeful has promised aggressive action. Nearly everyone has backed some broad outline of a Green New Deal–type of investment in fighting climate change and pledged not to accept fossil fuel PAC money.

I have spoken with the two-term governor and former state representative before and after he announced his presidential bid. I first caught up with him in a New Hampshire diner, when he was touring the state before his official announcement in January. Since then, we’ve spoken a few times. Once when he was in Washington, DC, attending a meeting of the Democratic Governors Association, which until recently he chaired. And most recently when he was back in DC between campaign stops, after he met with Woolsey Fire victims in California and before he headed to the New York City youth climate strikes in mid-March.

Here are some highlights from our conversations.

Mother Jones: People keep referring to you as a single-issue candidate. I’ve heard you compared to Bernie Sanders, whose first campaign focused on economic inequality, or even Howard Dean, whose major issue in 2004 was opposition to the Iraq War. The result of their presence in the race was that they often forced others to address the issue they campaigned on. Do you consider your focus on addressing climate change comparable to this?

Jay Inslee: No. The thing you need to understand about climate change is it’s not one issue. It’s not a single issue. It’s all the issues. It’s not about the economy; it is the economy. It’s both the destruction of the economy from the fires and the floods, and it’s job-creating opportunities. It’s about health; it’s about the increasing asthma and infection diseases and heat prostration we face. It’s about national security.

You can hardly point to anything you care about and say it isn’t necessary to defeat climate change to protect it. So we can’t succeed on these other issues unless we defeat climate change, and for that reason this is a whole other situation. No, I’m not a single-issue candidate.

MJ: Okay, but really, you’re not alone in calling this a grave threat. What makes you different?

JI: This has to be the first and foremost and paramount duty of the next administration. That is an important thing to say and to mean, and I am the only one who has done both. Because if it’s not job number one, it is not going to get done. The political capital that we need to accumulate and invest, the mandate that we have to build during the campaign can only be done by making this a priority.

MJ: The entire Democratic field has signed on to the Green New Deal in name. Has that made you rethink your role since you first considered running?

JI: I am the only candidate—I repeat the only candidate—who has said unequivocally and forcefully that defeating climate change has to be the number one priority. You can’t solve climate change by just checking a box. You can’t have it as one of your speaking points in your stump speech. You have to have a long-term commitment and actual achievements, and I have both. If the next president has not made this priority one, then it cannot get done. Where it comes in handy to be a governor and having served in the legislature is to understand how tough a lift this is—how much capital you have to spend, how much you have to be concentrated to this effort. And you can’t just make this one of the things on the to-do list. Frankly, I’ve seen a lot of the candidates do just that.

“And you can’t just make this one of the things on the to-do list. Frankly, I’ve seen a lot of the candidates do just that.”

MJ: You backed a carbon tax proposal that ultimately failed in Washington. In fact, different iterations of a carbon tax have failed at least two other times. So, do you think a carbon tax is a non-starter nationally, even for a future administration?

JI: I don’t think we should rule it out. But I do believe that we could look at the pollution reduction levels more from the investment side than the pricing side. In that initiative, 90 percent of all the carbon reductions were going to be from what we invested in, in the spending and incentive package, in development and deployment and job creation. It wasn’t just from the pricing. The point is, you can get spectacular carbon reduction from policies, regulatory and otherwise, that get you carbon reduction without a price signal. And there are other ways to finance these investments as well.

MJ: There was a letter from more than 600 environmental groups in January about a Green New Deal. And they came out pretty strongly against market-based mechanisms long backed by economists, like the carbon tax and cap and trade. Do you agree with that?

JI: We just don’t have a lot of time, so I think the strategy that I’m pursuing in my state is the right one, which is consistent with what you’re saying. It is to move forward with a regulatory system that drives investments that help consumers, that create jobs, that bring economic justice and more equity to our society. And those are the right measures to pursue right now.

MJ: Why have you been calling for abolishing the Senate filibuster as a climate change issue?

JI: Climate change is an existential threat to the country and the filibuster is an existential threat to the ability to do anything about climate change. When the country’s on fire, you can’t continue to embrace an antebellum, antiquated, and archaic vestige of a bygone day that just protects senatorial privilege. We have to have majority decision-making, and I’m the only candidate who has said that very clearly. The others have waffled about it, but when your country’s on fire, waffling doesn’t cut it.

MJ: What about the reports that your own home state of Washington has increased its carbon footprint the last few years?

JI: If these programs are implemented we’ll meet our statutory goals, and we all know we have to do more to defeat climate change. My state, because of our tremendous economy, is growing very rapidly. 100,000 people are moving here. And more cars. We understand the source of [those] emissions. That’s why we need to pass these bills and that’s why I’m very happy that finally after five years this is the first time I have a real working majority of Democrats who do not deny climate science.

MJ: Not everyone agrees you have a strong record on climate. You’re facing a lawsuit from Our Children’s Trust and Zero Hour alleging that your administration has come up short on doing everything possible to address climate pollution.

I understand the motivation of the younger generation, who are so inspirational, but I need to have the courts and the Legislature join in the fight for all that we’ve been fighting for. We’re going to be very forceful and aggressive, and I am. But I am not a dictator, nor am I royalty, and I need to have the cooperation of the legislative branches. And I think I will.

The 2020 Race Has Its First Climate Candidate