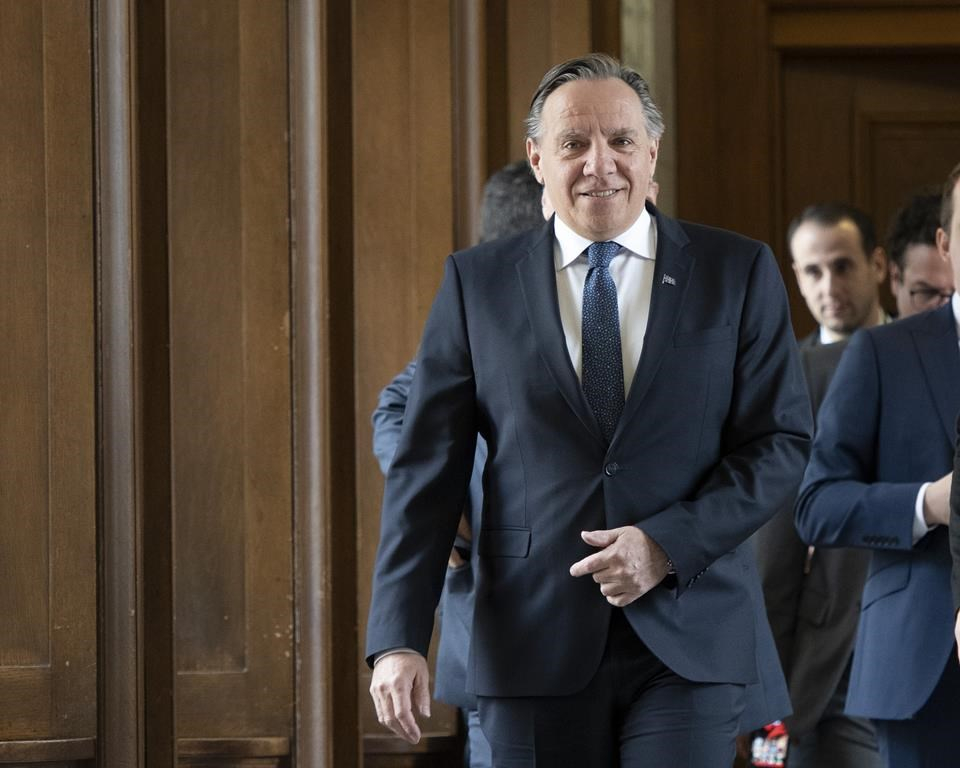 Quebec Premier Francois Legault leaves his office and walks to question period, on Wednesday, April 3, 2019 at the legislature in Quebec City. Photo by The Canadian Press/Jacques Boissinot
Previous story

Quebec's decision to draft a bill that affects the rights of religious minorities but limits their ability to challenge the legislation suggests the Canadian court system is useless or illegitimate, the Canadian Bar Association said Thursday.

The lawyers' association called on the province to remove the pre-emptive use of the notwithstanding clause from Bill 21 and let the courts do their job. "If the government is convinced its law is constitutional, then it should let the court process run its course," Audrey Boctor, president of the association's Quebec branch, said in an interview.

Bill 21, introduced last Thursday, would prohibit public sector workers deemed to be in positions of authority, including school teachers and police officers, from wearing religious symbols on the job. The inclusion of the notwithstanding clause blocks citizens from challenging the bill over violations of fundamental rights protected by the federal and provincial charters.

Premier Francois Legault has said the bill is "moderate" and "a compromise." He has argued his government invoked the clause to avoid legal challenges that would cause lengthy delays in the law's implementation. Boctor said that contention is "illusory," because lawyers will find creative ways to take the provincial government to court over the legislation.

Bill 21 "was introduced last week, and already we've seen constitutional experts come out and suggest avenues for challenge," she said. By invoking the notwithstanding clause the government is depriving citizens of the ability to make an enlightened decision about legislation that limits the rights of religious minorities, such as Muslims and Jews.

But Legault rejects the notion Quebecers need more information to make an informed decision on Bill 21. Aside from the notwithstanding clause, his government is planning on limiting debate in the legislature to ensure the bill's quick adoption.

During question period Thursday, Legault cited the hundreds of hours of official debate and public consultations that have occurred across the province since 2007 on the issue of state secularism. "Is that not enough?" he asked in response to a question from the official Opposition.

Interim Liberal leader Pierre Arcand said Legault's government is incapable of giving details as to how the legislation would be enforced. "If he wants to limit our rights, he should have the courage to say how he'll do it," Arcand said in the legislature.

A spokesman for Bill 21's sponsor, Immigration, Diversity and Inclusiveness Minister Simon Jolin-Barrette, was not immediately available for comment on the bar association's statement.

The Canadian Bar Association is a voluntary organization that represents members of the Canadian legal profession, including judges, prosecutors and notaries. The Quebec bar society, membership of which is mandatory for practising law in the province, said Thursday it is studying the bill and has not taken a position on it.

In principle, I agree with

In principle, I agree with Legault, public servants in a secular state should, out of commonsense courtesy, avoid blatant signs of religious affiliation. We are, one hopes, long past the eras in which religious authorities exercised both corporal and moral judgements and punishments on its populations. Sadly, this is not true of large swaths of the earth where religious (or religiously based, or cultural customs based) persecution is alive and thriving. Now that our human species is mingling and mixing at a rate not previously experienced, we face a crisis of adaptation.

We are struggling to integrate our newest wave of immigrants into a system of ethics, morals and rule of law that is quite unknown to them. On top of which, many of them have fled to Canada precisely to escape the violent, amoral and arbitrary application of unfettered authority, where no safety can be found and no trust placed in even minor, largely corrupt government functionaries.

Too often, even in our "enlightened" society, we revert to the subtleties of "tribalism". We look for the signals that denote status; social class, economic stratum, political power, group loyalties, any indication of how we will be treated, how we should behave to achieve favourable response. Eliminating the visible signs of religious affiliation eliminates one of those signals and that can be either comforting or alarming.

What it SHOULD signal is even handed impartiality, unbiased execution of one's duties. All of which remains to be seen.

The irony is, that we are coming at this problem of diversity from a position of weakness. Our own history, indeed our present, is littered with instances of misplaced power and authority, misused political and economic might, and a colonial past deeply rooted in the unshakeable conviction that the "white" subset of homo sapiens, were and are, God's chosen people, destined to rule and subjugate all other human and sub-human iterations of the humanoid form - not to mention all other earthly creation.

The atrocities committed by the white subset in their pursuit of absolute dominance have been largely buried under the myths of white triumphalism. Much of the chaos of this current era has been caused by the horrid realization that white supremacy is as much a myth as are the mythic bogies we have created among the humanity that doesn't share our particular set of genomic mutations. White nationalsm is the strangled scream of fear that we really don't control the world. Climate change is making us crazy because we don't know how to control or alter the fate it has in store. Similiarly, non-white humans invading our space is an uncontrollable force that even extreme violence is unlikely to halt.

Unfortunately, the outward vestments, dress, jewelry, tattoos, hair styles, eye colour etc. are wholly unreliable guides to the personal probity, morality, trustworthiness of any individual. We have, I hope, finally come to the realization that one's appearance or one's affiliations are no surety for fairness, compassion, or ethical behaviour.

Quebec, more than most of Canada has cause to rue the unholy alliance between its heritage religion and its dictatorial and criminal Duplessis government. It can happen anywhere, involve the most unlikely allies, and one can never relax one's vigilence against potential usurpers, no matter their skin colour, their allegiance or their uniform.