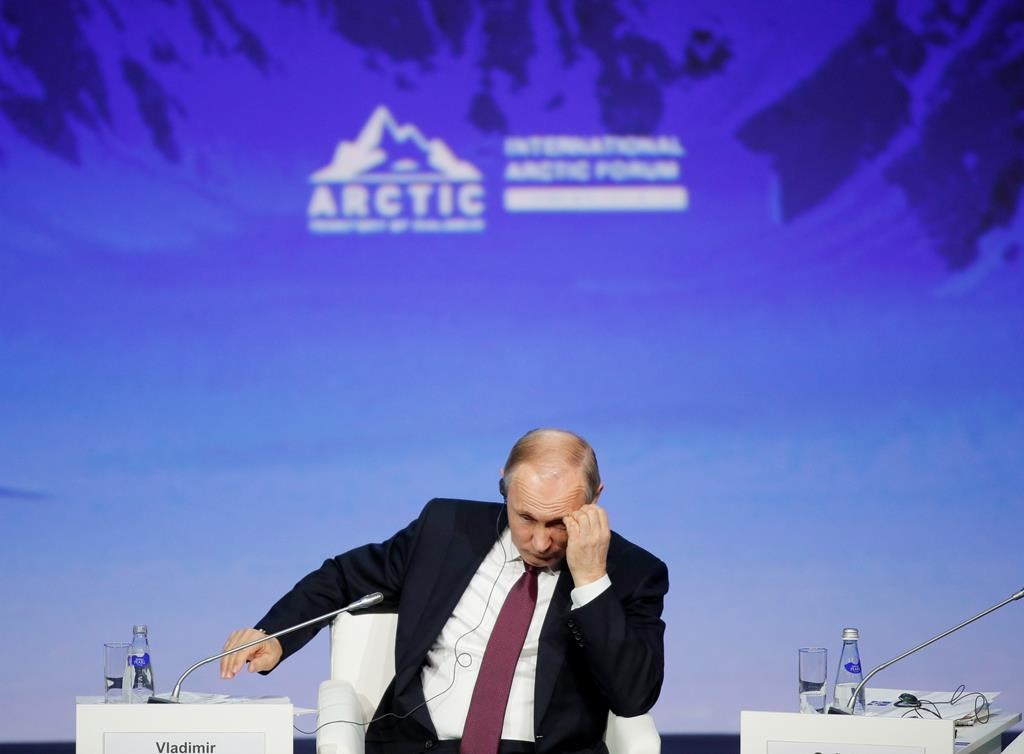 A House of Commons committee is urging the government to work with NATO to determine Russia's military intentions in the North and get help to protect the country's Arctic sovereignty.

That was the top recommendation of a report tabled Wednesday by the Commons foreign-affairs committee based on a study it began last June.

It arrived one day after Russian President Vladimir Putin outlined an ambitious plan to increase Russia's Arctic presence, including expanding its fleet of nuclear-powered icebreakers and building new ports and other infrastructure.

Russia, the U.S., Canada, Denmark and Norway are trying to settle jurisdictions in the vast territory as disappearing polar ice opens new and lucrative possibilities for oil and gas exploration as well as shipping.

The Russian leader invited foreign companies to invest in projects at both ends of the Arctic shipping route, from Murmansk in Russia's northwest to the Kamchatka Peninsula in the east.

In contrast, Wednesday's report says that the "Canadian Arctic continues to suffer from an infrastructure deficit" and that "vigilant foreign and defence policies are not, on their own, enough."

"There is also the national imperative of ensuring vibrant communities," the report says. It says a "direct line" can be drawn "between Northern and Indigenous empowerment and the assertion of Arctic sovereignty."

The report urges Canada to work with its partners in NATO's governing body, the North Atlantic Council, to better understand Russia's military intentions in the Arctic and to consider the most appropriate and "measured response."

It makes clear this is about "deterring and defending against any threat to the members of the North Atlantic Treaty Organization."

"Russia has been rebuilding and modernizing its military capabilities and has demonstrated a willingness to challenge the international rules-based order. Perhaps most alarming, with new missile technology, Russian aircraft and submarines can now strike targets at great distances, including from launch points well outside of North American airspace and waters," the report says. "There is a need for deterrence through the collective will of the North Atlantic Treaty Organization."

Foreign Affairs Minister Chrystia Freeland's office said Canada's sovereignty in the Arctic is "well-established" and the government will respond to the report in detail in due course.

"Canada co-operates with all Arctic Council members, including Russia, to advance shared interests such as sustainable development and environmental protection, the role of Indigenous peoples, oceans, climate change adaptation and scientific research," said spokesperson Adam Austen. "Canada is firmly asserting its presence in the North, ensuring we have the capability and capacity to protect and patrol the land, sea and sky in our sovereign Arctic territory. We remain firm and steadfast in defending Canada's interests in the Arctic."

The Arctic Council is a bloc of eight northern countries that also includes the United States.

On Tuesday, Defence Minister Harjit Sajjan said he "can't talk about Russia's actions and reasons" for its Arctic behaviour but he said the North forms a significant part of the Liberal government's new defence policy.

Six Arctic patrol vessels will be undergoing trials shortly and the Canadian Forces have done Arctic exercises with NATO partners, including the United States, he noted.

"We are taking our Arctic sovereignty very seriously," he said. "We're sending a very strong message."

In the past, the Liberals have tried to work with Russia within the Arctic Council. But Russia's aggressive posture elsewhere — its annexation of Ukraine's Crimean Peninsula in 2014, fomenting of separatism in eastern Ukraine, and allegations of cybermeddling and foreign election interference — have strained co-operation on the Arctic.

Alison LeClaire, the senior Arctic official at Global Affairs Canada, told the Commons foreign-affairs committee last June that Russia's contributions at the Arctic Council were "important and worthwhile" but she said its behaviour elsewhere in the world hasn't helped.

"With respect to co-operation with Russia, one need only look at a map of the circumpolar north to understand why working with them is in our interest. Together we share 75 per cent of the Arctic area," she said.

Canada is well aware of Russia's increased military activities in the North, including military drills, the reopening of bases, investments in its northern fleet and increased surveillance capabilities, said LeClaire.

"However, Russia's military presence in the Arctic is still much more modest than it was in the 1980s," she testified. "Canada sees no immediate military threat in the Arctic, but we remain vigilant and are working with our allies and partners to keep the Arctic as a zone of peace and co-operation, a goal we share with Russia."

Coast guard struggling to help with rescues, Arctic resupply due to old fleet