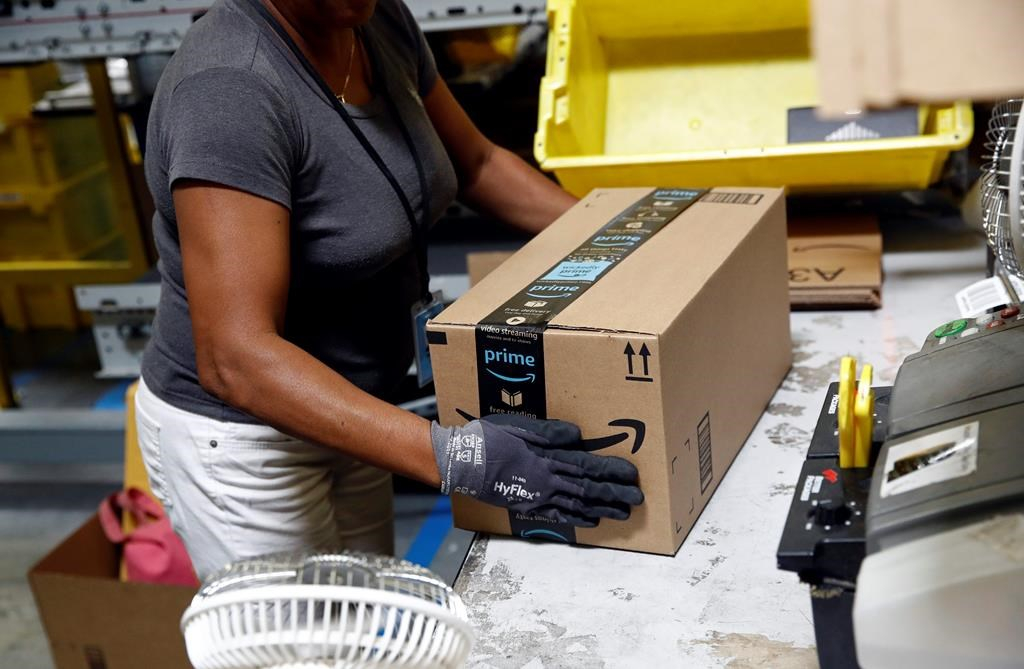 In this Aug. 3, 2017, file photo, an Amazon employee applies tape to a package before shipment at an Amazon fulfillment center in Baltimore. File photo by The Associated Press/Patrick Semansky
Previous story
Next story

Amazon is getting cozy with the oil industry — and some employees aren't happy about it.

The online shopping giant, which already works with BP and Shell, has been trying to woo more oil and gas companies to use its technology to help them find drillable oil faster, angering workers who have been pushing Amazon to do more to combat climate change.

The employees say the company should drop its work with industry entirely, arguing that it shouldn't contribute to hurting the environment. Workers at Amazon's Seattle headquarters have been meeting regularly, spreading the word and encouraging more involvement to put pressure on the company.

The issue came to a boil on Wednesday, when workers publicly published a letter to CEO Jeff Bezos that was signed by more than 4,000 Amazon employees.

"Amazon absolutely should not be helping oil and gas companies extract oil from the ground," said Emily Cunningham, a user experience designer at the company who is part of a group of employees who have pushed Amazon to reduce its carbon emissions.

Amazon, which hooked shoppers on getting just about anything delivered in two days, is likely to already have a massive carbon footprint. Its core business model has led to a global boom in package shipping, by planes, trucks and vans — all powered by fossil fuels.

The company is now courting oil producers to Amazon Web Services, which offers cloud computing services to government agencies and major companies, such as video-streaming service Netflix and digital scrapbooking site Pinterest. AWS is one of Amazon's biggest money makers, accounting for more than 70% of Amazon's total profit last year.

It's unclear how big of a business oil and gas companies are for AWS; BP and Shell have been clients for several years. But it seems Amazon has stepped up its courting of the industry recently.

Andy Jassy, who runs AWS, spoke at last month's oil and gas conference CERAWeek in Houston for the first time. Amazon was also one of the sponsors of the event, which brings together executives from some of the top oil and gas producers around the world. At one of Jassy's discussions, he explained how Shell was using Amazon's machine learning technology to figure out which wells would produce the most oil before drilling.

"That's a real game-changer," he said at the conference.

Questions sent to Amazon about its ties to the oil industry were not answered. Instead, AWS spokesman Jason Kello sent a link to its sustainability website, which said the company uses solar and wind power to some of its data centres.

Erik Gordon, a professor who follows Amazon at the University of Michigan's Ross School of Business, said ditching an entire industry as a client would seem unlikely, and could lead to more employees trying to tell Amazon which companies it can or can't work with.

"I'll be surprised if Amazon gives into the demands," he said.

Employees at big tech companies have been emboldened to advocate for issues they care about. At Google, for example, high-paid employees walked out of their offices last year to protest the tech company's mishandling of sexual misconduct allegations against executives.

In February, Amazon announced that it would release its carbon footprint for the first time later this year and said it would make half of its shipments carbon neutral by 2030, but provided no details on how it will do that. Employees say the announcement wasn't enough.

In the letter released Wednesday, workers list a number of grievances, including that the company doesn't have any detailed climate change plans and that it's seeking the business of fossil fuel companies.

"Amazon has the resources and scale to spark the world's imagination and redefine what is possible and necessary to address the climate crisis," the letter said.

More young workers are demanding that their employers do more to combat climate change, said Sue Reid, a vice-president of climate and energy at Ceres, a non-profit that works with large investors and companies to make sustainability changes. She said that ignoring worker demands could hurt worker morale and bring more negative attention to the company. Often, making the changes benefits the companies since reducing energy use can mean cutting costs.

"It's kind of baffling companies don't line up to do this," Reid said.

Nonetheless, workers like Rajit Iftikhar, a software engineer at Amazon, are still making a push. Iftikhar said climate change is a personal issue for him: He's of Bangladeshi decent, a country that has been hurt by flooding and other natural disasters that have been linked to global warming.

He said large companies like Amazon that are contributing to climate change should be doing more to reduce their impact.

"This is extremely concerning to me," he said. "The people who are least responsible for climate change will bear some of its worst consequences."

Seems like the Amazon employees are smartee than their boss. But he has probably lost interest in everything except the money that keeps rolling in and keeps HIM on top of the wealth pyramid. Being on top is perilous Jeff, - nowhere to go but down!