The art of the positive women 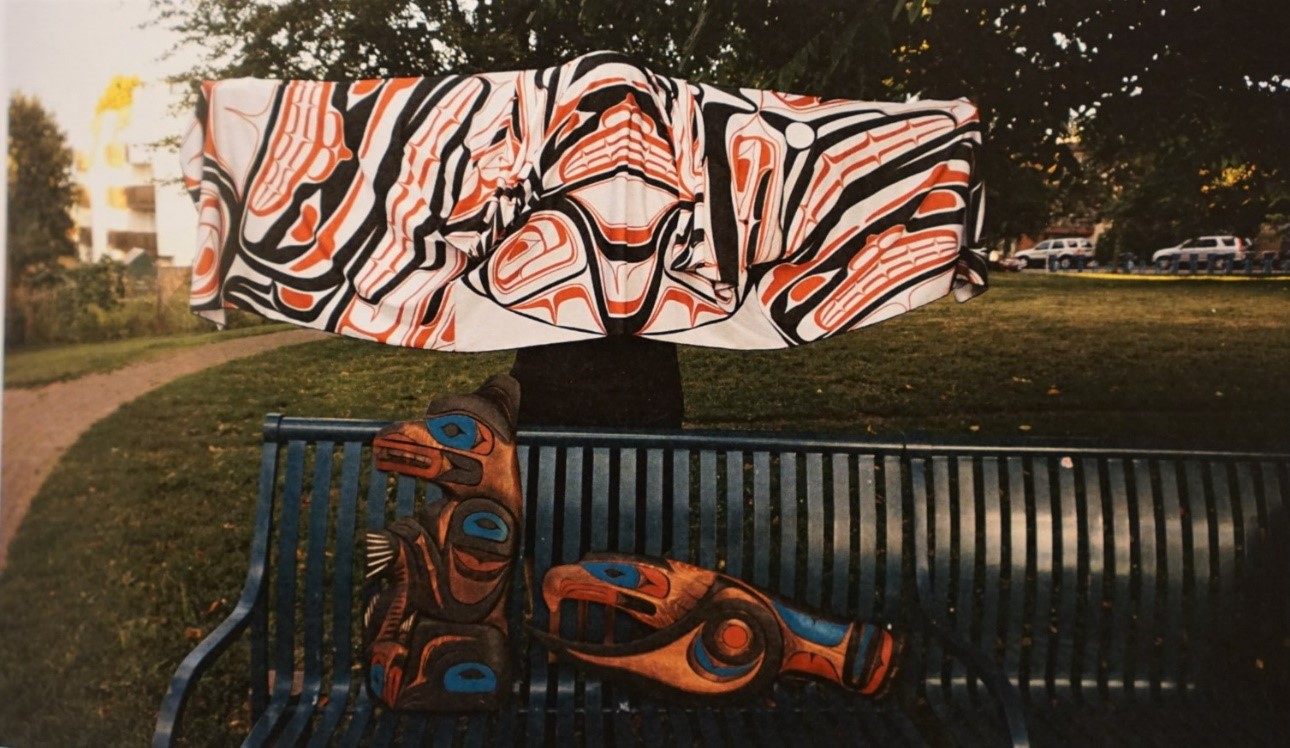 Photographer Betty Boop says everything changed for her after she was diagnosed while living in a small northern community. "My family became ostracized," she writes. "As long as I was there, there was talk. That's why I chose to leave."
Previous story
Next story

Flo Ranville sat by the window of a narrow art gallery in Vancouver’s Chinatown, surrounded by a series of photographs of faceless people. Ranville pointed out a photo of a person standing behind a park bench, covering their face with a shawl. Two wooden carvings sit on the bench beside her, a bear holding a salmon and an eagle.

Ranville said the woman, who uses the alias 'Betty Boop,' is from a northern Indigenous community. She and her family were ostracized after she was diagnosed with HIV.

“Her brother, nobody bought moose meat from him, or fish anymore, because he was related to her,” Ranville said. Betty Boop left home to save her family from the stigma and now lives in Vancouver.

Betty Boop and other HIV-positive women still face the risk of violence due to this remaining stigma. As well, Canadian law still allows for HIV-positive people to face criminal charges if they don’t tell their sexual partners that they’re positive. SHAWNA aims to shed light on these living conditions through the exhibit, called “Through Our Own Eyes: Disclosure, Stigma and Pain.”

The collection features photos by women using aliases to illustrate their lives with HIV. It’s part of a wider effort to share HIV-positive stories while maintaining the women's safety and privacy. The exhibit was put together by SHAWNA and includes 26 photographers.

Ranville, who has Lakota, Woodlands Cree, French and Scottish ancestry, has lived with the virus for almost two decades. She’s a peer mentor for SHAWNA. She works with HIV-positive women to find out their needs, from community, to social services to medical care. She also educates women on the law around HIV disclosure.

Ranville said, for her, HIV and pain mean the same thing.

Part of SHAWNA’s goal is to educate women on Canada’s laws around HIV non-disclosure. SHAWNA wants women to know about the law around non-disclosure so they can avoid facing criminal charges and not live in fear, confusion and isolation.

Canada has no HIV-specific criminal charge. But positive people can face aggravated assault and aggravated sexual assault charges for non-disclosure.

The law requires a person to tell their sexual partners they’re HIV-positive, unless they use a condom and have a “negligible viral load.”

Organizations like SHAWNA say the law shouldn’t require condom use on top of a negligible load, since it’s virtually impossible for someone with a suppressed load to transmit.

The federal government has acknowledged the need to update the law. But while changes have been made, technically, the law still stands.

Just before Jody Wilson-Raybould was shuffled and then resigned from cabinet, the former attorney general issued a directive on non-disclosure. The December 2018 directive acknowledged people with a suppressed viral load face “no realistic possibility of transmission.” She directed prosecutors not to prosecute if a person has a suppressed load, and generally not to prosecute if a person “used condoms or engaged only in oral sex or was taking treatment as prescribed, unless other risk factors are present.”

But the directive only applies to prosecutors under federal jurisdiction in the three territories since the provinces have provincial crown attorneys.

Critics also point out lower-income people often don’t have ideal living conditions for effective medical treatment. And SHAWNA argues disclosure is a gendered issue – some women in the exhibit wrote they don’t feel they have the power to make their partners use condoms. This means they may agree to unprotected sex to avoid conflict, but still not tell their partner they have HIV because they fear retribution. That puts them in the pathway to be charged for non-disclosure.

Several photographers said they’d had partners threaten to report them to police. Ranville faced this fear years ago.

She was compelled to disclose to her 12-year-old daughter in ministry care. Later, her daughter told Ranville’s partner.

“After I wanted out of that relationship, he came to me with a note from his doctor saying, ‘my doctor wants to get me tested for HIV because I’ve been with you,’” she said.

Ranville dreaded that if he tested positive, he could report her to police for non-disclosure.

“I remember feeling so frozen, and trapped, and not being able to leave that relationship.”

“[HIV] changed my life for the better. I’ve heard that from a lot of women. The life I have today, the job I have today, I wouldn’t have if I wasn’t positive. I’d be on another path somewhere,” she said.

Ranville said she hopes the exhibit can be shared more widely – on Indigenous People’s Day, on World AIDS Day, on the sidewalk in downtown Vancouver, on the justice minister’s desk.

“These voices need to be heard,” she said. “This took three years to do. It doesn’t seem like a lot. But it’s so impactful.”

HIV took over...and I couldn't use my body the same way anymore

“Dance was who I was at my best. But HIV took over,” says Shelly Tognazzini, over a video of her dancing. “It was all over my body. It was in my body. And I couldn’t use my body the same way anymore.”

This is part of Tognazzini’s story in a dance she choreographed for filmmaker Edmond Kilpatrick. “The Shelly Videos” are another venture that talks about disclosure and stigma. Tognazzini talks about getting HIV from her long-term partner.

He had kept his status secret. After she was diagnosed, he left. She didn’t dance for some time.

Tognazzini said she lost friends and family after being diagnosed, and that the stigma and physical toll of the virus stopped her from dancing for years. Now, she’s using dance and written word to share her story and counter dominant narratives around HIV.

Tognazzini said art reaches people in a more profound way than learning about HIV through mainstream media, which she says has actually exacerbated stigmatization since the 1980s.

She said news stories about non-disclosure cases often portray the positive person as an aggressor and their partner as a victim, without including the nuances around stigma.

“Media had a big role to play in the misrepresentation of transmission for many years,” she said. “Criminalization has continued to demonize the disease. All it does is prevent people from getting tested.”

Tognazzini also writes for a website that launched last year, called Life and Love with HIV, which gathers stories from positive women around the world writing about sex and relationships. Tognazzini said it’s pioneering as an online space for positive women to talk openly and creatively about intimacy.

Like SHAWNA, women on Life and Love often write under aliases. Tognazzini, who has published with both her name and an alias, said anonymous art is more accessible for women who may fear stigma, violence or job security.

“Even though they cannot live out publicly, they are in their own way empowering themselves, whether it be through writing or creative process,” she said. “That is equally as valuable as those of us that choose to be out with our status.”

Tognazzini said younger people don’t seem to carry the stigma as deeply as her and Ranville’s generation. The law may change, and younger women may not feel the same fear those before them did.

“That’s not fair,” the girl responded, crossing her arms.

They had a banner out for visitors to sign. The girl took a marker and wrote in large capital letters across the bottom.

“These women should be safe always.”