By Sidhartha Banerjee in News, Politics | May 1st 2019 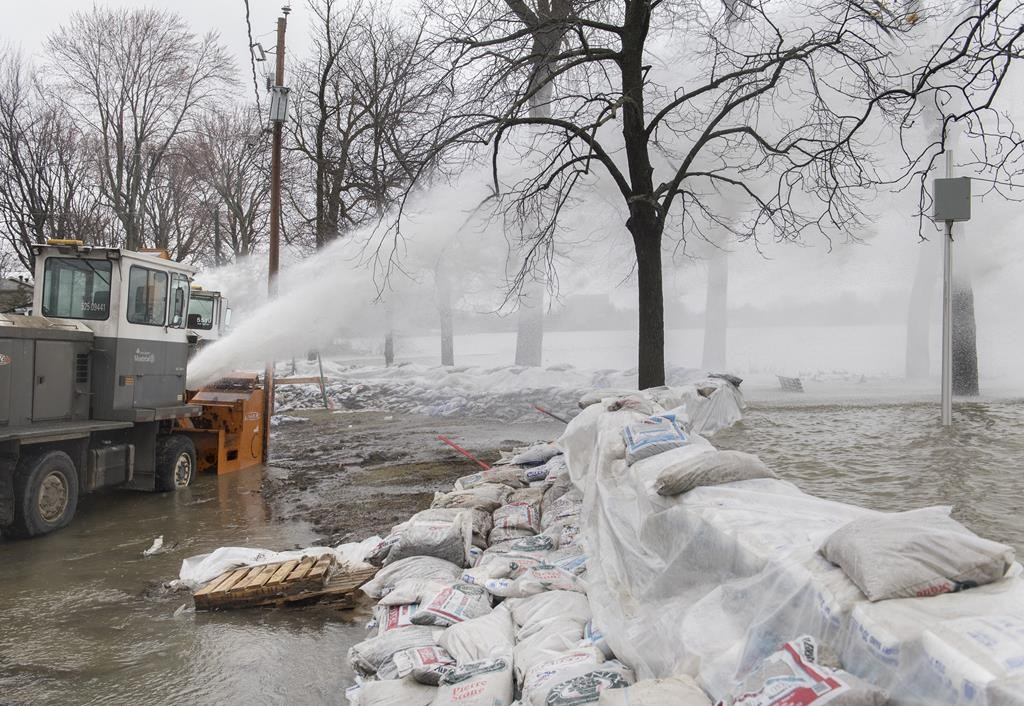 A snow clearing machine blasts water out into a river on Ile Bizard west of Montreal, on Saturday, April 27, 2019. File photo by The Canadian Press/Graham Hughes
Previous story

Montreal first responders are warning against so-called disaster tourism after noting a spike in selfie-seekers in neighbourhoods threatened by swollen rivers.

An operations chief with the Montreal fire department said his teams on the ground have seen many people who don't live in the affected areas milling about makeshift dikes and other flood-relief infrastructure, snapping photos and selfies.

"What we want most of all is for people not to play tourist. It's not the time," Martin Guilbault said Tuesday. "We want to leave access roads free. There are a lot of dead-end streets, so we don't want people to come just to see the dikes."

Guilbault said he has seen curious onlookers turning up in the flood-affected regions, primarily in the northwestern part of the city, to inspect the dikes and temporary dams and snap photos of structures keeping the rising river at bay.

Ramona Pringle, a Ryerson University professor who studies the relationship between humans and technology, said the disaster selfie is an extension of breaking news in the social media world.

"The rise of the selfie and the natural disaster is an extension of that immediacy — that even if we're not affected by something, I think people feel they are part of it," Pringle, director of the Innovation Studio at Ryerson, said in an interview. "The negative side of that is when people can't disassociate good behaviour from what might be harmful or what might get in the way."

Pringle says the immediacy can have a positive impact when it inspires people to lend a hand. The danger comes from social media attention-seekers who want to put a "flag-in-the-ground" to be part of the story.

Guilbault said while he hasn't seen anyone climbing on dikes and dams, the fire department wants to prevent onlookers from damaging structures that were built in a matter of days and are under a tremendous amount of water pressure.

Officials also don't want to have to deal with outsiders should one of the dikes give way, creating an extreme emergency. "Don't come by if you have no reason to be here," Guilbault said.

Montreal is currently under a state of emergency until Thursday afternoon.

Because of widespread flooding in various locations, Transport Canada has banned boats in specific flood areas to help first-responders on the shore. The department has also prohibited the use of drones within 9 kilometres of all flooded areas in Quebec.

Asked if the city had considered a designated selfie spot, Guilbault said he didn't know if it had been discussed. Pringle noted that given the context, it's not a bad idea.

"It seems somewhat appropriate if you're dealing with the reality of the times that we live in that'll cause the least amount of damage," she said.