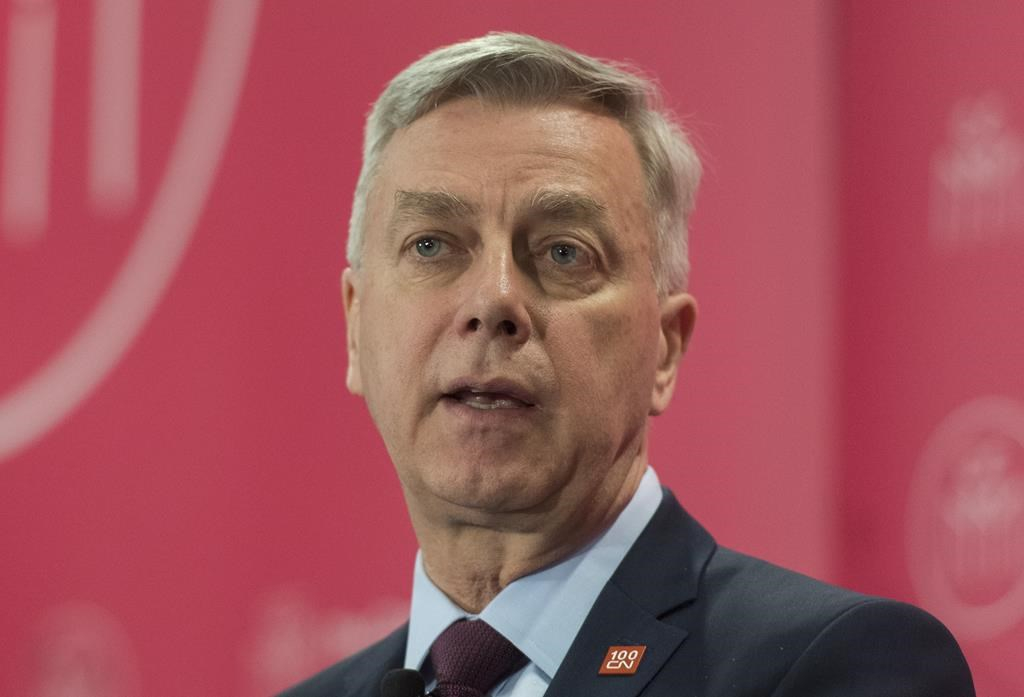 "The role of the rail industry is a recent role and probably a temporary role. We’re not here to replace pipelines; we’re here to be a compliment for a period of time," Canadian National Railway Co. chief executive Jean-Jacques Ruest told The Canadian Press in an interview.

"We're in a position to be a bridge, if you will, between now and the time that pipelines are being built. We could be a bridge for the next year, two years or three years."

CN Rail ramped up capacity with more track, crews and locomotives, Ruest said, only to see volumes fall this year from record highs last autumn after Alberta lowered the oil production cap to free up export pipeline space and boost the price of Western Canadian Select amid an oil glut.

Attempts to build or expand pipelines have faltered the last few years, leaving railways to pick up the slack. Major projects such as the Northern Gateway and Energy East pipelines were cancelled, and delays continue to snarl the Trans Mountain expansion, Line 3 replacement and Keystone XL pipeline.

Meanwhile CN Rail and Canadian Pacific Railway Ltd. shipped 23 per cent more oil and petroleum in 2018, according to the Association of American Railways. Crude-by-rail exports hit a record 327,229 barrels per day in October, a 58 per cent year-over-year increase, according to the National Energy Board.

CN's crude-by-rail exports to the U.S. are currently down 40 per cent from December to about 150,000 barrels per day, Ruest said. But year-over-year revenue from petroleum and chemicals still rose 25 per cent last quarter.

"Our assumption at this point is that if the spread goes back to about $15 or higher, then the crude-by-rail business between Alberta and the United States will start to pick up again."

Ruest declined to comment on whether he'd been in contact with Alberta's United Conservative Party, which formed government for the first time after Premier Jason Kenney and his cabinet were sworn in Tuesday.

In March, Kenney said a United Conservative government would try to cancel Alberta’s $3.7-billion deal with CN and CP to ship more oil by rail, calling the plan "a catastrophic mistake by the NDP."

Ruest said private sector producers would likely be ready to pump oil into any void left on the railroad by a potential contract withdrawal or revision by Kenney.

Analyst Cameron Doerksen of National Bank Financial said crude has proven volatile for the railroads due in part to yo-yoing pricing spreads.

"They’re not dependent on crude-by-rail, but they have the available capacity to participate if there is demand and can make good money off of it," Doerksen said.

"I think it’s probably the case that there’s going to be a rebound in the crude-by-rail volumes, versus what we’ve seen the last couple months, for the remainder of the year."