Military on defensive after soldiers wrongly given guns for Sikh parade 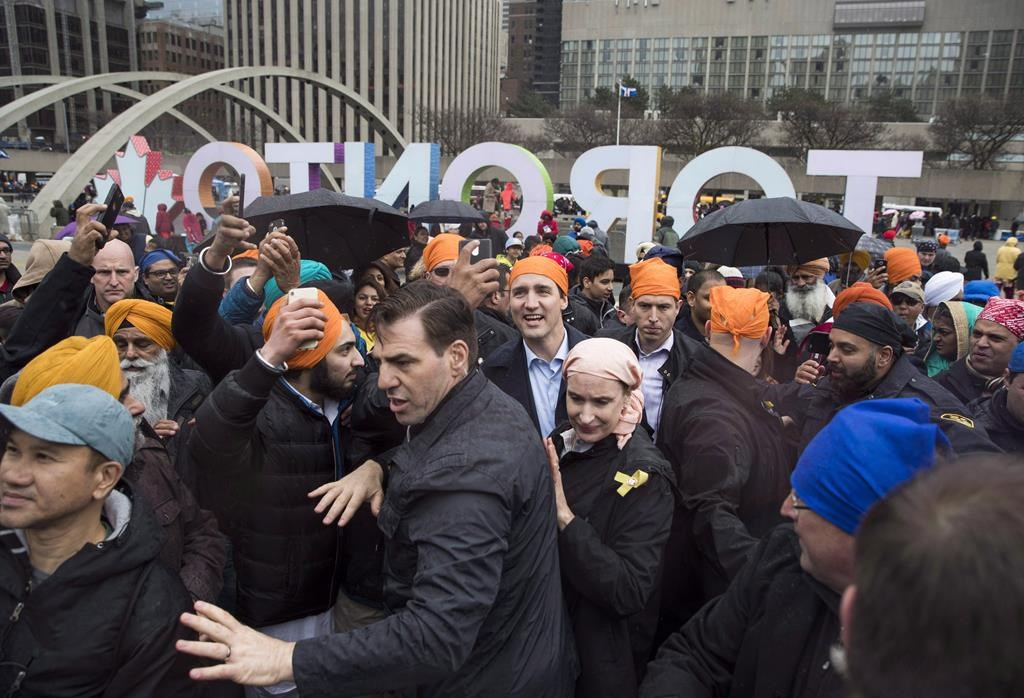 Security stands in front of the Prime Minister of Canada Justin Trudeau as he greets people at the Khalsa Day parade, an event that celebrates the Sikh new year at Nathan Phillips Square in Toronto on April 30, 2017. File photo by The Canadian Press
Previous story

The Canadian military is scrambling to explain why a group of soldiers was issued weapons to march in a Toronto parade on Sunday for Canada's Sikh community.

Photos and videos of the event show the soldiers, many of them turban-wearing Sikhs, marching in the Khalsa parade in military uniforms and carrying assault rifles, which the military says is not normally allowed. They were also escorted by an armoured vehicle.

The only time service members can carry weapons in public is during certain military parades or demonstrations such as a tattoo, according to Canadian Army spokeswoman Karla Gimby.

The commanding officer of the Lorne Scots reserve unit, which is based in Mississauga, signed off on the weapons, Gimby added, after his commander approved participation in the parade and asked him to organize the soldiers' participation.

"Normally, weapons are not carried at such events," she said in an email.

"The decision to have personnel in full fighting order was made by the local commander and was not in keeping with the Canadian Armed Forces Manual of Drill and Ceremonial."

The army's top commander in Ontario, Brig.-Gen. Joe Paul, is following up with the unit and has issued additional orders prohibiting the carrying of weapons at similar events, Gimby said.

Asked about a formal investigation and possible disciplinary measures, Gimby said: "The incident will be investigated thoroughly."

"(Paul) has a range of administrative and disciplinary measures at his disposal. As of now it is too early to determine what will happen since the investigation has not been concluded."

Held to commemorate the Sikh holy day of Vaisakhi, the annual Khalsa parade in Toronto has grown over the years to become one of Canada's largest such events, with an estimated 100,000 attendees.

This year's parade also coincided with the federal government's decision to remove a reference to Sikh extremism from a report on terrorism after it was added for the first time in December, sparking outrage from some members of the community.

Balpreet Singh Boparai, legal counsel for the World Sikh Organization in Canada, acknowledged that some might try to use the photos and videos of Sunday's parade to stir up fears of Sikh extremists infiltrating the Canadian Forces.

But he said the Khalsa parade has nothing to do with extremism, adding the military has participated in many such events before and, "personally, I believe if this was a group of white soldiers, people who don't look different, it wouldn't have been an issue."

Ontario government to allow Sikhs to ride motorcycles without helmets