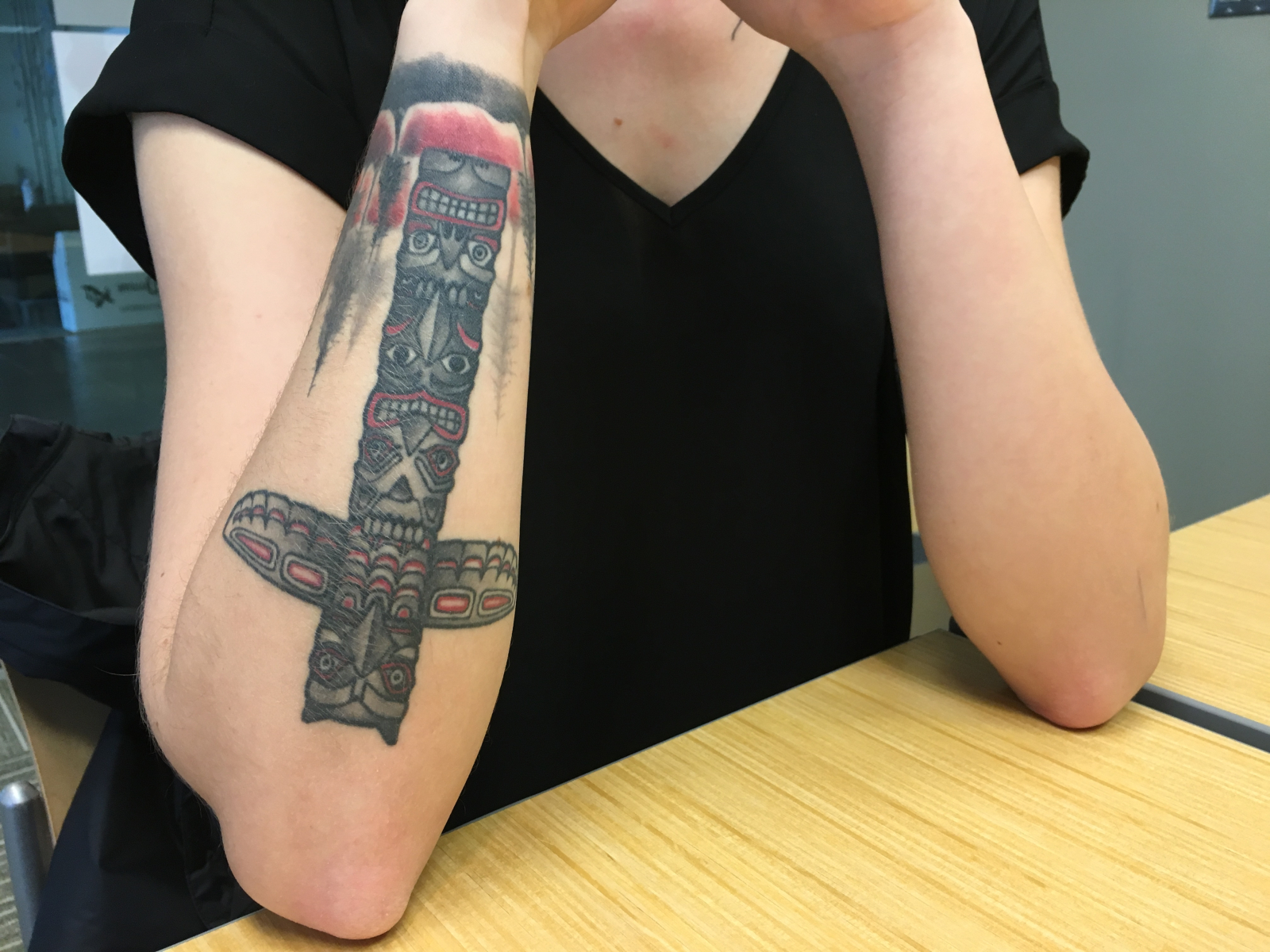 Verukah Poirier is a third-year Indigenous studies major who lives in residence at the University of British Columbia. Age 21, Poirer has her sights set on law school, having done well in the admission test.

Poirier is one of 800 former foster children whose post-secondary tuition fees were waived as part of a provincial program launched in 2017. The program requires B.C.’s 25 public post-secondary schools to offer free schooling to students aged 19 to 26 who spent at least two years in care.

She spent most of her childhood in care, living with extended family or foster parents. Like the majority of children in care in British Columbia, she is Indigenous. Her grandmother is First Nations, from the Maskwacis Nation, and her grandfather is Metis from Saskatchewan.

She can’t count the number of houses she’s lived in, but she guesses it’s between 15 and 20.

She attended four different elementary schools. She had to advocate for herself so she could stay at the same Surrey high school, even as she was moved from home to home.

As a teenager, she spent time living in a shelter. At 17, she lived on her own, on a youth agreement, a form of independent living with government financial support.

“My whole life has been in care. I’ve been interacting with (the Ministry of Children and Family Development) as long as I can remember,” she said in an interview with National Observer.

Children who grow up in care move often and only a third of them graduate high school by age 19.

The majority of children in care in B.C. are Indigenous — 63.5 per cent — even though Indigenous people make up just four per cent of the provincial population.

Having "Indigenous elders on faculty encourages parents and communities to trust the university enough to send their kids to be educated there. #education #BCpoli

“When you look at the impact of residential schools and the intergenerational impact when kids were taken out of their families, the communities are still recovering,” William Litchfield, associate vice-president, university relations, at Vancouver Island University in Nanaimo, B.C. told National Observer. “If we can help by providing education, education was unfortunately the method that was used to destroy the culture and break down those families, but it’s also going to be the way to lift them back up.”

Melanie Mark, B.C.’s minister of advanced education, is Indigenous and grew up in government care, living in two foster homes and later in the care of a relative. She is B.C.’s first female First Nations MLA and cabinet minister.

After she aged out she went to Vancouver Island University when it was Malaspina College, ultimately earning a bachelor of arts in political science from Simon Fraser University.

When asked if this program would have made a difference for her, Mark told National Observer that “no act of reconciliation is too small."

“I’m an Indigenous person and my grandparents went to residential school. So to me, I’m going to do everything I possibly can to make the future look brighter.” More than 1,100 Indigenous students study at the University of British Columbia in Vancouver and at its Okanagan campus.

UBC tries to provide cultural support for Indigenous students in many ways, said Margaret Moss, the new director of the First Nations House of Learning at UBC.

Anywhere from 50 to 100 students attend a weekly lunch at the campus longhouse, she said, while the school also has an elder-in-residence: Larry Grant from the Musqueam Nation.

A student engagement officer hosts and plans the weekly lunch, as well as movie nights, student welcomes, presentations from Indigenous authors, and other events. Students have access to math and science tutors, a computer room, a study lounge and counselling, Moss said.

Indigenous students are also able to participate in a special graduation ceremony, where they walk through a ceremonial door into a great hall in the longhouse.

UBC has about 27 Indigenous faculty members, Moss said, and 175 Indigenous students are eligible for graduation this year.

“I find UBC very far ahead — from anything in the U.S. for sure and ahead of McGill also,” said Moss, who has worked at universities throughout the United States and also spent time at McGill University in Montreal.

“There are huge differences between recruitment of students, faculty, visibility, symbolism, the reconciliation pole, the Musqueam pole, the Musqueam flag, the History Centre and so on. You don’t see that. At least on the East Coast you don’t.”

Grant, the elder-in-residence, is quite busy, so Moss wants to create an Indigenous elder advisory council so students are able to interact more with elders.

She’d also like to make the longhouse more welcoming, especially for new students.

While Poirier is academically successful and says the Indigenous community at UBC has been very important to her, she also wishes the cultural support system was stronger.

“School is very stressful. They do have access to counselling services, but when you come out of care, you experience different traumas than the rest of the students and I think because I am Indigenous there is another level added on to that,” she said. “There is one Indigenous counsellor, but she has 900 students to deal with on campus.”

“Sometimes you just feel overwhelmed and that nobody understands where you’re coming from,” she said. “Being able to speak to someone who is Indigenous gives a different level of relief. Whenever I reach out to someone who’s not Indigenous, they don’t really understand.”

Having someone to talk to can sometimes be the most important thing for students, Vancouver Island University president Ralph Nilson said in an interview with National Observer.

“Sometimes, it’s just letting them know that somebody loves them and has got their hands on their back,” he said. “That significant other — many times people didn’t have that. That’s still one of the big issues because people can get isolated.”

As well as the tuition waivers, an international foundation funds tuition for Indigenous students, Litchfield said.

When Nilson arrived on campus more than a decade ago, that wasn’t the case. He was shocked to learn how few students came from the surrounding First Nations.

Today, elders are on the same pay scale as PhD faculty, Nilson said. The school created two classes that are co-taught by Indigenous elders and western scientists – one about plants and the environment and the other about the human body.

“The elders bring all of the cultural strength and knowledge that they have,” he said. ”It’s a way for the university — which is a Western construct — to show respect for the Indigenous ways of knowing.”

The knowledge the elders have brought is “sensational,” Nilson said.

“This helps students. All of a sudden they can see themselves here,” he said. “Also, it helps parents and communities trust the university enough to send their kids to be educated there.”

Getting strength from the Indigenous community

As much as she could, Poirier has always tried to prepare for her future. She’s not in touch with either of her parents. Who else would be there to help her?

So, when she was in Grade 11, she enrolled in a hairdressing program, knowing her 19th birthday was coming up and she needed a way to make money.

After her Grade 12 graduation, she worked full-time cutting hair for six months, while still supported by the government.

On her birthday, she went straight from the youth agreement to another support program, called Agreements with Young Adults. The program provides $1,250 per month for 48 months to former foster children between the ages of 19 and 26 who are attending school or a training program.

She started her post-secondary career at Langara College, with plans to become a social worker. Not long after, she realized she really enjoyed Indigenous studies and switched paths with her sights now set on a law career.

Even with the financial support from the government, including the tuition waiver, she works about eight hours a week, cutting hair.

No life goes entirely to plan, and this winter she realized she was pregnant. Now six months along, she’s planning a one-term break while she and her partner get used to having a baby, but then she plans to get right back to her studies.

She only has a year left of funding from the Agreements with Young Adults program.

But she’s no longer entirely on her own.

At both Langara and UBC, Poirier’s connection with other Indigenous students has helped.

She commends Langara for its work with Indigenous students.

“Langara’s Indigenous population is small, but their Indigenous faculty and professors are all in the same area and they’re always around the students,” she said. “I miss it so much.”

At UBC, she’s optimistic about the potential impact of the new Indigenous student fee: 95 cents from every student’s fees will go towards Indigenous events and activities.

And she worked with UBC’s Alma Mater Society, the university’s student society, to get a space created just for Indigenous students. Now, students have their own space with couches, TVs, a fridge, a coffee maker and several large study tables.

“We have a lock on the door. Only Indigenous students have access to the door. It’s not like we’re trying to be exclusive,” she said. “We are trying to make it a safe space to be Indigenous where we can talk about what we’ve been through and heal.”