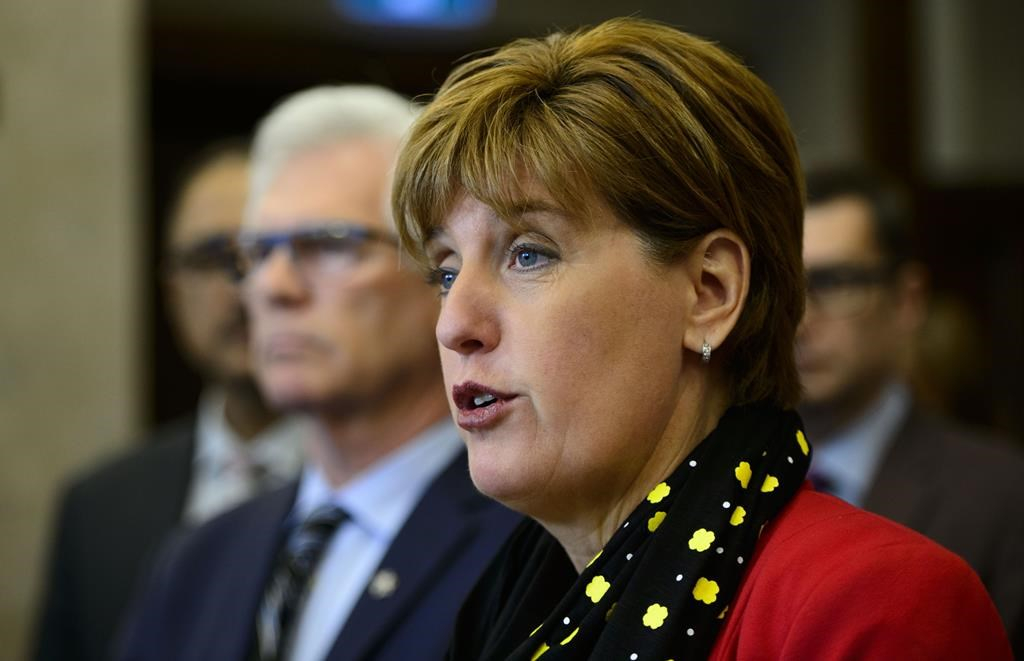 Marie-Claude Bibeau and Jim Carr, provide an update on the government's response to the canola trade dispute with China during a press conference on Parliament Hill in Ottawa on Wednesday, May 1, 2019. Photo by The Canadian Press/Sean Kilpatrick
Previous story
Next story

The federal Liberals promised Wednesday to give Canada's canola farmers financial aid to lessen the impact of China's decision to ban their products as part of a trade dispute with no end in sight.

The changes made to a program that advances farmers money against the expected value of their crops will raise loan limits to $1 million from $400,000, and the portion that will be interest-free is rising to $500,000 from $100,000.

Producers praised the changes on Wednesday, saying they will help farmers get through a tough spot.

"Hopefully we won't need any more help and hopefully the market smartens up and we're able to get our crop in and sell it at a good price," said Todd Lewis, president of the Agricultural Producers Association of Saskatchewan.

The changes will help with uncertainty and stress the industry is going through as farmers worry about what to plant and how they'll deal with the falling price of canola, added Keystone Agricultural Producers president Bill Campbell.

Citing unproven concerns about pests, China has rejected Canadian canola seeds in recent months and barred shipments from two of Canada's biggest exporters in what is considered retaliation for the detention of Huawei executive Meng Wanzhou.

The Liberals said changes to the advance payments program are designed to ease cashflow pressures for affected farmers.

"We stand shoulder-to-shoulder with Canada's canola producers and farm families across the country and we will continue to listen to their needs," Agriculture Minister Marie-Claude Bibeau said on Parliament Hill Wednesday morning.

"Canada has the best canola in the world as well as a very robust inspection system."

He also said he will be promoting canola in all of his upcoming visits, including to France.

"It is critical that Canadian exporters have other readily available markets when faced with trade disruptions," he said. "Our country's continued prosperity and job creation depends on secure markets abroad."

Conservative foreign-affairs critic Erin O'Toole called Wednesday's announcement positive, adding it is a step his party has long called for. But he warned it is a stopgap measure that does not address the underlying diplomatic tensions.

"The Trudeau government has allowed our diplomatic situation with China to descend into chaos, where we are not sure what commodity could be at risk next," O'Toole said, just outside the House of Commons.

Conservative Leader Andrew Scheer has previously called for the federal government to take a more confrontational approach with China, including launching a complaint with the World Trade Organization and cutting Canadian funding to China's Asian Infrastructure Investment Bank, to which the government has committed $256 million over five years.

Scheer has also pressed the Liberals to appoint a new ambassador to China. On his way into the Liberals' weekly caucus meeting, Prime Minister Justin Trudeau said the government has a strong career diplomat who is handling "the particulars of this very well."

Carr told reporters there is agreement across the sector, including with provincial governments and producers, that Canada should engage China on the stated basis of its allegation — that there are impurities in the canola despite two inspections by the Canadian Food Inspection Agency. Canada will navigate this challenging period with China through careful, deliberate and strategic engagement, he said.

"We just need to ensure that we have the relationship that we are actually able to trade that commerce and we are going to support our federal government in those conversations moving forward," he said.

—with files from Andy Blatchford