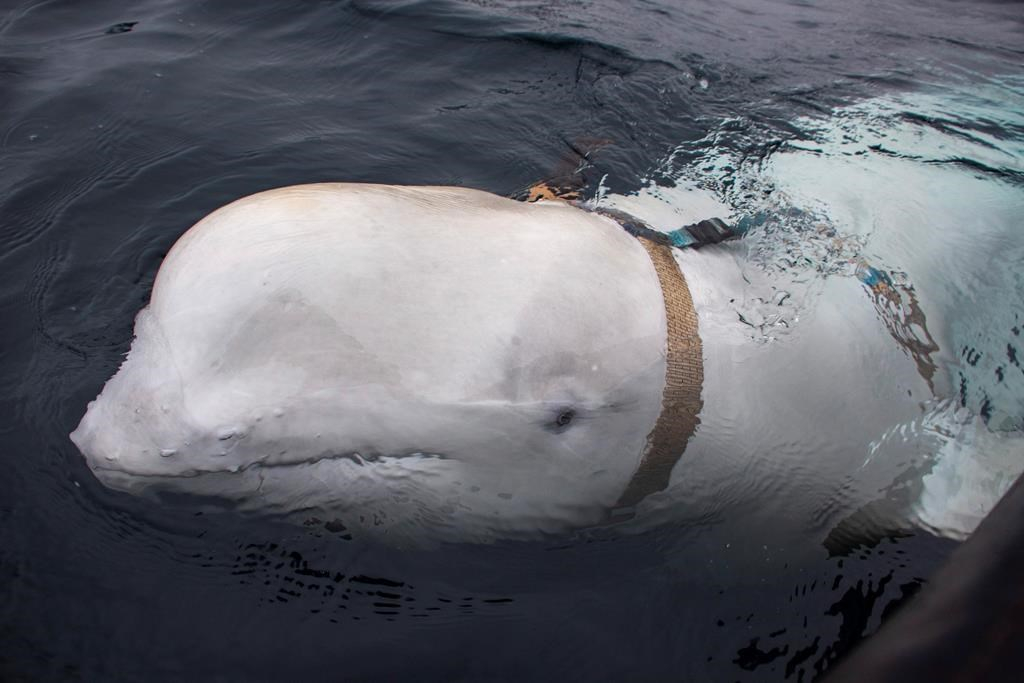 A beluga whale seen as it swims next to a fishing boat before Norwegian fishermen removed the tight harness, swimming off the northern Norwegian coast on Apr. 26, 2019. Handout photo by Norwegian Direcorate of Fisheries Sea Surveillance Unit
Previous story
Next story

Norway may be wondering about the porpoise of a beluga whale found in its waters sporting a Russian harness, but Canadian defence officials say they are dolphinately not worried about militarized cetaceans being used here.

The beluga in question was discovered by Norwegian fishermen last week wearing a harness bearing the words "Equipment St. Petersburg" and featuring a mount for an action camera. It is also apparently unafraid of people.

The white whale has alarmed Norwegian officials prompted speculation it might have come from a Russian military facility and been trained as a spy. The animal has refused to leave and appears to enjoy interacting with its new hosts.

While Canada might seem a prime country to train belugas — about two-thirds of the global population of the small-by-whale standards creatures regularly summer in Canadian waters — the Department of National Defence said that is not the case.

"We do not train sea or marine animals, nor have we discovered any," National Defence spokesman Daniel Le Bouthillier said in an email, adding: "While we find the situation a bit fishy, we are not concerned at this time."

Norwegian experts appear convinced that the beluga found in their country's waters was being trained by the Russian military for some purpose, though exactly what isn't clear.

Russia does not have a history of using whales for military purposes but the Soviet Union had a full-fledged training program for dolphins.

The Soviet Union used a base in Sevastopol on the Crimean peninsula during the Cold War to train the mammals for military purposes such as searching for mines or other objects and planting explosives.

The facility in Crimea was closed following the collapse of the Soviet Union, though reports shortly after the Russian annexation of Crimea indicated that it had reopened.

The Russian Defence Ministry published a public tender in 2016 to purchase five dolphins for a training program.

The U.S. Navy has also trained and used dolphins and sea lions for decades to help find mines and protect ships and facilities against espionage, though it says it has never used them for an attack mission.