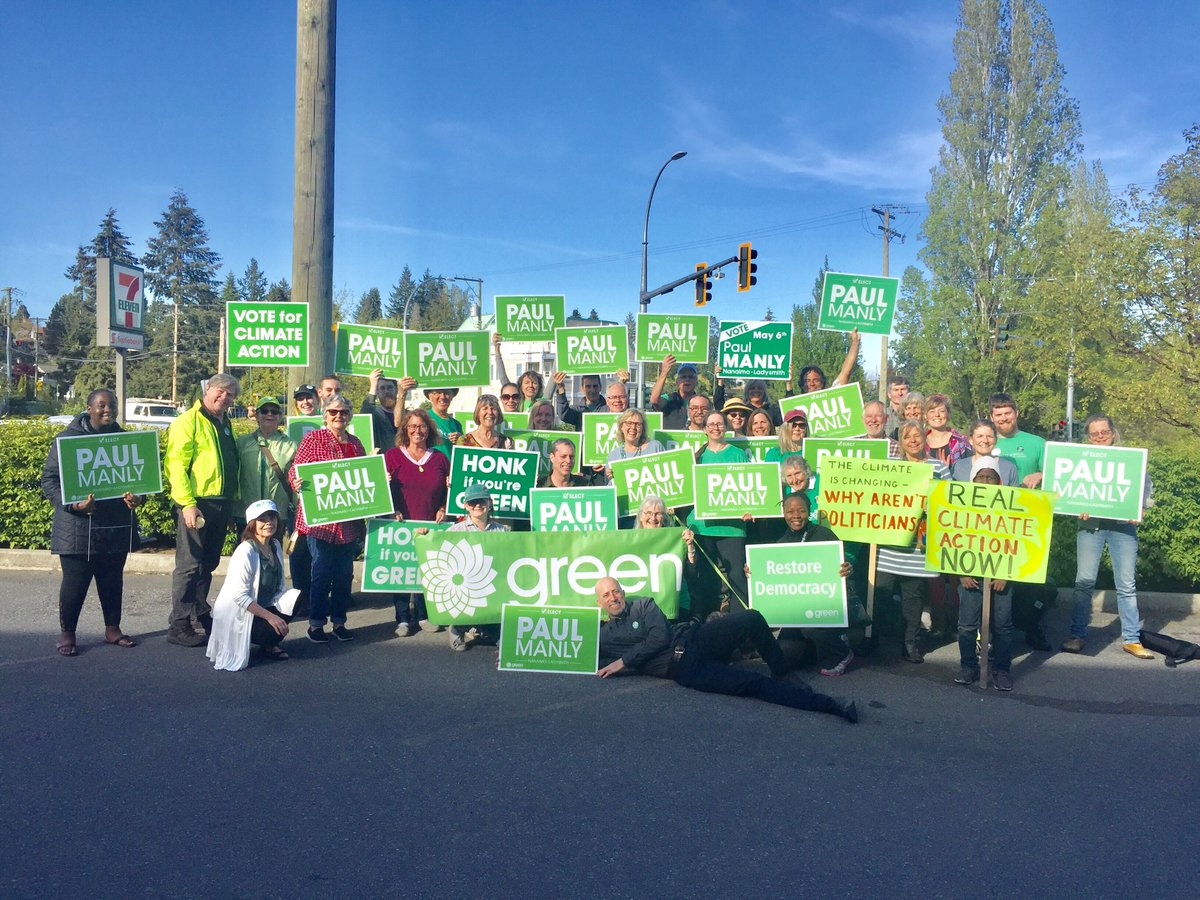 Green Party Leader Elizabeth May campaigns with candidate Paul Manly in May 2019 ahead of a federal byelection in the riding of Nanaimo-Ladysmith. Twitter photo
Previous story

Green candidate Paul Manly coasted to victory on Monday in a byelection in the B.C. riding of Nanaimo-Ladysmith, joining Leader Elizabeth May as the second member of the party to take a seat in the House of Commons.

Global News projected that Manly would win the riding shortly before 10 p.m. local time in the Vancouver Island riding, with the Greens capturing about 37 per cent of the vote.

Moments after the results were clear, Manly said the people were sending a message that they want to see action on climate change.

#BREAKING: @GlobalBC projects a win for @paulmanly and the @BCGreens. Manly is giving an emotional victory speech at the @BCGreens headquarters now—promising to work across party lines to tackle the climate and affordability crises, and homelessness. The crowd’s ecstatic. #bcpoli pic.twitter.com/PYpDpMtCLr

"I'm going to work across party lines to get things done for our community," Manly told supporters after the results came in. "I just can't thank people enough for hopping in and helping out."

People's Party of Canada candidate Jennifer Clarke had about three per cent of the vote in the early results.

The riding was previously held by former NDP MP Sheila Malcolmson, who resigned in order to run for the provincial legislature in a race she won earlier this year.

Manly is a researcher, filmmaker and communications specialist, who previously ran in the 2015 general election, finishing fourth with 20 percent of the vote. The NDP recruited Chamberlin, a vice president of the Union of BC Indian Chiefs, as a star candidate for the vote, but he was unable to hold onto the seat.

The upset had one CBC reporter scrambling to get over to Manly's election night party after starting the evening with a scattered crowd at the NDP event.

“This turnout isn’t the outcome we were hoping for...but we have a lot to be proud of as NDP tonight,” says a visibly disappointed Bob Chamberlin as he congratulates Paul Manly on a Green win. @cbcnewsbc #cbc #bcpoli #cdnpoi #NanaimoLadysmith #byelections2019 pic.twitter.com/ENSrbGofxM

The Green Party has previously had two other MPs who were elected under different party banners before crossing the floor. But Manly is the first one, besides May, to be elected as a Green candidate.

"It sends a message clearly that we've seen a wave come across from Prince Edward Island ... that people are serious about climate change," Manly said, according to a report by The Canadian Press.

He also said that it was time for government's to stop subsidizing the "old" economy.

"How we can change the economy — that we are working in to protect the environment that we need for our health, for our children, for our grandchildren," he said. "How we can do a better job of taking care of people who are less fortunate.

"We moved beyond the horse and buggy and it's time to move beyond the internal combustion engine," Manly said, as the crowd cheered.

"Those days should be over. It's time to move forward."

May, who recently celebrated her wedding to John Kidder on the island on Earth Day, spent the last weekend of the race urging voters to make history by sending Manly to Ottawa.

“I am deeply grateful to Paul Manly,” said May in a statement. “His team of volunteers and, most of all, to the voters of Nanaimo-Ladysmith. It is brave to vote for real change. Paul and I will work tirelessly to continue to earn the trust of Canadians. Paul will make Nanaimo-Ladysmith proud."

Manly will take his seat in the Commons with less than six months to go before a general election scheduled for October.

Editor's note: This article was updated several times on May 6, 2019 with updated results from the byelection.

Thank you Naniamo and Paul

Thank you Naniamo and Paul Manly! Together with PEI and recent breakthroughs all over the country,here's hoping our future is finally (G)reen and clean!

Finally, truly Great News! Hopefully the Green Wave will also deliver a strong showing at the federal level this October!

Why is it that if you live

Why is it that if you live near an Ocean you are far more concerned with the environment? I hope that this is the beginning of a very necessary change. Congratulations to Nanaimo-Ladysmith and BC. I intend to vote GREEN in the coming election.
I remember PM Trudeau's performance at his Nanaimo Townhall and how disappointed I was in him. He should have realized that the people in attendance were the one's who truly care and influence the vote.

We're on our way!

We're on our way!

P.E.I. Greens make history as Tories come out on top