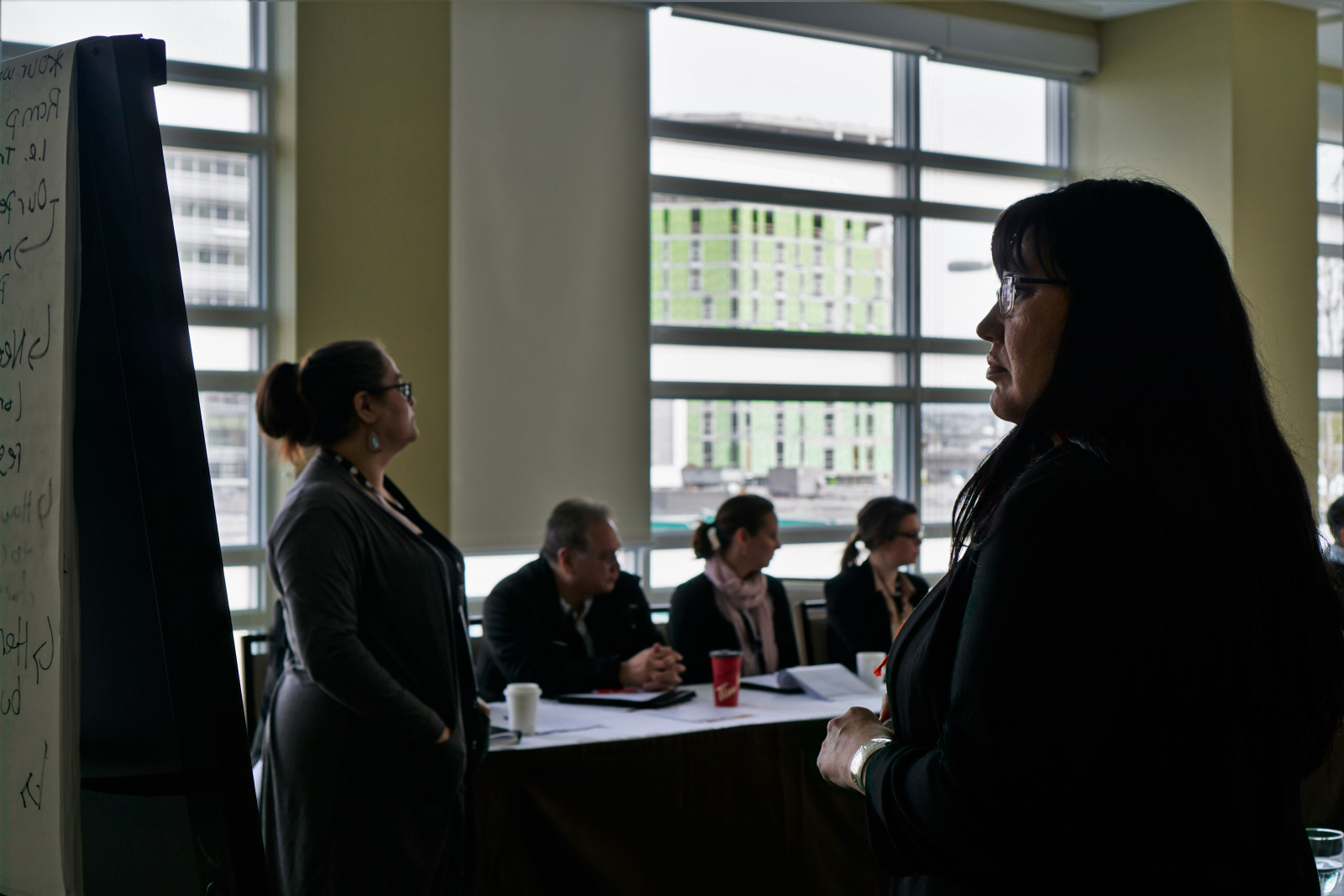 Tracy Downey, left, and Annita McPhee led a discussion of how to revitalize Indigenous legal orders during the First Nations Provincial Justice Forum in Richmond, B.C. on April 25, 2019. Photo by Stephanie Wood
Previous story
Next story

In 1999, the Supreme Court of Canada called on judges to acknowledge the impacts of colonialism on Indigenous people in the criminal justice system. The court encouraged restorative justice and urged prosecutors to pursue all other sanctions besides imprisonment when possible.

It’s been nearly 20 years since the Supreme Court made the Gladue decision. Yet, in that time Indigenous representation in prisons has doubled.

“Instead of getting better, things have gotten significantly worse,” said Khwulasultun, or Doug White. He is a lawyer and a councillor for the Snuneymuxw First Nation.

Indigenous people make up about four per cent of the country’s population. Yet, 28 per cent of admissions to provincial and territorial prisons were Indigenous adults in 2016/2017, according to Statistics Canada’s most recent report. The same report said 46 per cent of youth incarcerated were Indigenous.

For the first time, First Nations in British Columbia are getting the opportunity to work alongside the provincial government to reform the justice system.

This strategy would be aimed at better serving Indigenous people in the justice system, and decreasing overrepresentation overall. Members of the council are at the same time working on ways to revitalize Indigenous laws and create an independent Indigenous legal system within the province.

All Indigenous people are entitled to a Gladue report that considers their personal history before sentencing. Canadian courts can request these reports for pre-sentencing and bail hearings. The reports evaluate the person's background and how systemic racism may have led them into the criminal justice system.

These reports enable judges to uphold the Gladue Principle. But the commission of these reports has been low, and incarceration rates have continued to rise across the country.

The province committed $700,000 to work with Indigenous organizations like the justice council to increase the number of Gladue reports.

The Ministry of the Attorney General told National Observer that 216 Gladue reports were produced over the 2018/2019 fiscal year. This is an increase from 131 reports the year before, though it fell just short of the ministry's goal of 250 to 300 reports.

National Observer asked how many cases overall involved Indigenous people being charged for 2018/2019, to see what proportion received Gladue reports. The ministry responded "neither the ministry nor the BC Prosecution Service systemically tracks whether accused persons are Indigenous or non-Indigenous."

While some critics remain skeptical about how committed the provincial and federal governments really are to Gladue rights, since the problem has only gotten worse, White believes change is possible.

At a recent conference, he said the presumption of diversion is one of the most important policies to pursue – that is, making diversion from incarceration the norm.

White sees hope in changes the BC Prosecution Service made to its Crown Counsel policies in April. The updated guidelines recognize the Gladue Principle and the effects of bias and racism in the criminal justice system.

"The continuing consequences of colonialism for Indigenous persons in Canada provide the necessary context for any charge assessment involving an Indigenous person as a victim or potential accused," the guidelines read. They also direct prosecutors to exercise restraint in bail matters and probation for Indigenous people.

"You can see that there's the beginning of a presumption of diversion in that new policy," said White. "The idea is there. There's a good path opened up, and we'll be able to encourage the work of that path."

At a recent forum, members of the BC First Nations Justice Council and leaders from across the province made plans to push further than Gladue. They don’t just want to Indigenize the existing system. They want to establish an independent Indigenous legal system.

The justice council, the Ministry of the Attorney General and the Ministry of Public Safety and Solicitor General jointly hosted the First Nations Provincial Justice Forum in Richmond April 24-25.

The forum invited leaders from First Nations across B.C. to come together and begin planning a strategy. They also want to strengthen and revitalize legal traditions that have existed for millennia.

By focusing on restorative justice and prevention, they hope to reduce the number of Indigenous people in prisons and children in foster care.

The forum stems from a memorandum of understanding the council signed in September 2017 with the two ministries to develop the justice strategy.

The council members come from backgrounds that include law, First Nations governments and social work. 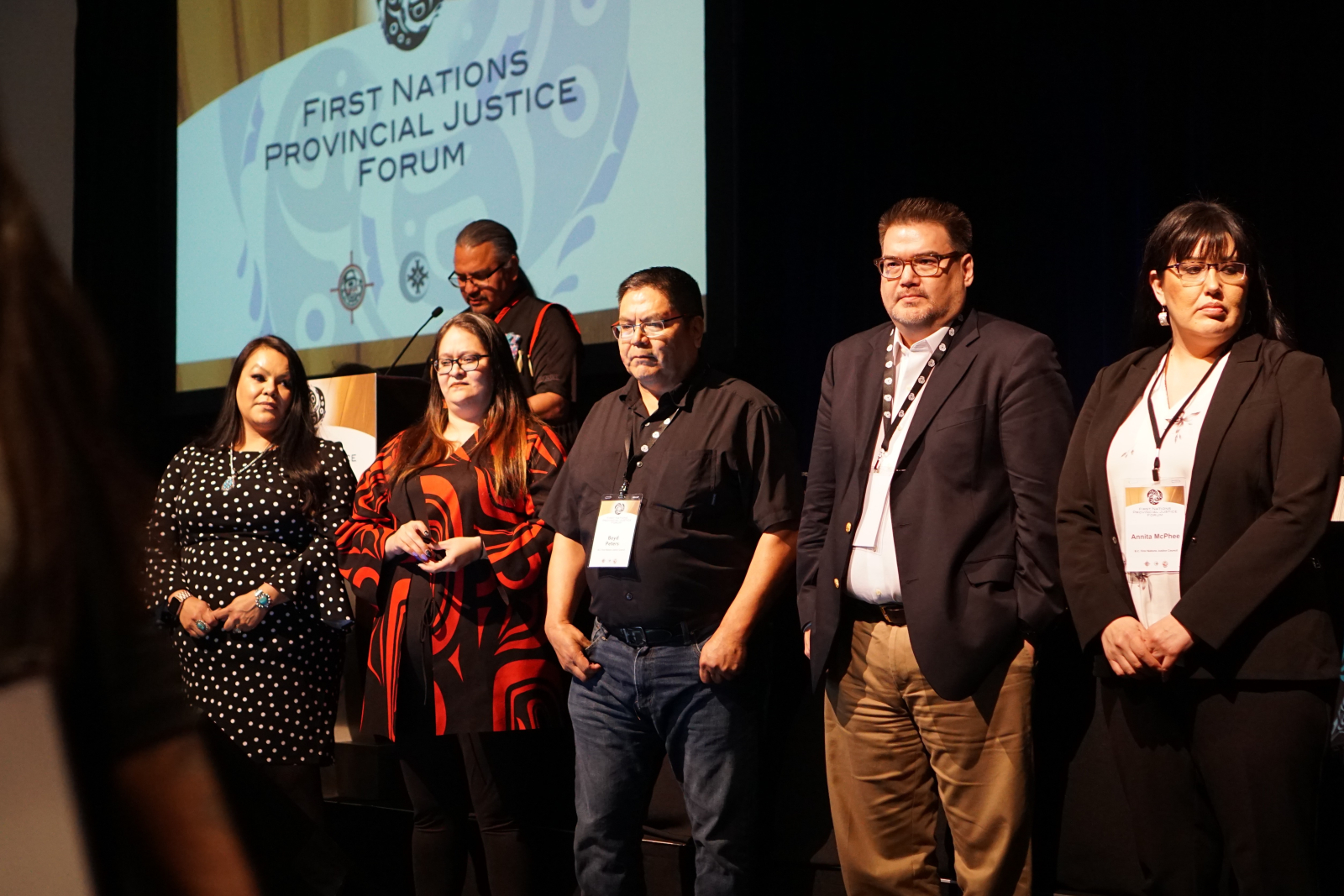 At the forum, White and the four directors broke into smaller groups with chiefs, councillors and community leaders.

Director Annita McPhee from the Tahltan Nation, co-led a discussion about revitalizing Indigenous legal systems with fellow director Ksem git sa’amł, or Tracy Downey, from the Tsimshian Nation. They also talked about family law, and how to get Indigenous children out of foster care and back to their communities.

“How do we support parents to be better parents? How do we have healing programs that can help parents instead of having kids taken away?” McPhee asked. “How do we help them before we get to those crises? We need the resources and prevention dollars.”

She said funding is a necessity for any substantial change. She said government funds for Indigenous law are typically short-term, and inadequate for sustainable development.

"We can deal with [problems] in a restorative justice way and still have accountability," she said in an interview with National Observer. "But we need that investment of funds for them to be programs, not projects."

The council has long-term goals like building more Indigenous courts. They also want to build justice centres for every community. These centres would operate like legal clinics and provide advice and family assistance.

Some others at the forum suggested funding to build alternative correctional facilities that focus on rehabilitation and restorative justice.

Many Indigenous legal systems are based on restorative justice, which prioritizes community-based sentencing and healing for everyone involved.

Aboriginal Legal Aid in BC says restorative justice focuses on repairing harm done to anyone affected by the crime, while recognizing the challenges a person may have faced before committing a crime. They say "the goal of a restorative justice approach is to balance accountability and rehabilitation."

The B.C. and federal governments have allocated funds for Indigenous law.

The 2019 federal budget acknowledged several calls to action by the Truth and Reconciliation Commission. One call to action is to "support renewed legal relationships with Indigenous Peoples." The budget proposed $9.1 million over three years for a legal lodge at the University of Victoria. The lodge will house a dual university degree program in Canadian common law and Indigenous law, the first of its kind in Canada.

However, several people at the forum pointed out this is a small proportion of the over 200 Indigenous communities in B.C.

No one size fits all strategy

McPhee and Downey's group talked about revitalizing legal traditions across that many communities.

Attendee John Powell, whose traditional name is Winidi, pointed out the challenge of reclaiming so many legal systems. He asked how a new Indigenous legal order would work across nations.

"How do we come to an understanding, so we create, reclaim, a sense of our way of doing things without having people feel like it's just another system imposed on them, that may not particularly fit their nation or the needs of their nation? Because obviously one size does not fit all," said Powell. He is a fashion designer from the Mamalilikulla First Nation and chairperson of the Kwakiutl District Council.

He illustrated the challenges of working out a strategy, questioning whether someone from one nation would still be under the law of their own territory if they traveled to Vancouver, or if jurisdiction would change.

"When our people are not behaving appropriately in other people's communities, then those other people need to be able to reinforce what we've all agreed is a law or legal order for all of us," he said.

McPhee agreed there's a wide variety of needs across First Nations. She said her northern community, Telegraph Creek, has different needs than down south.

One Tahltan community, Iskut, has no local police station. It's served by RCMP in Dease Lake, which is more than an hour drive away.

"If I'm in a domestic violence situation, this could be very dangerous for me and I could be at risk," she said.

Several people also suggested funding to train locals to be first responders until help can arrive.

Some people in the forum were worried about false government promises since such little progress occurred in the two decades since the Gladue decision.

Wilf Adam is a representative of the First Nations Health Council from the Lake Babine Nation. He stood before the forum and questioned the government's commitment.

"After 20 years, why is Gladue going down the tubes?" he asked. "Is the government not really following what Gladue says? Where will we go in the next 20 years?" Adam asked, referencing the high number of Indigenous people in prisons.

"Until we grab a hold of this system for our own...then we're always going to be susceptible to the political whim and the changing tides of a system that doesn't belong to us," said White.

The council has four more regional visits planned over the coming months. They plan to have the strategy drafted by September 2019.

Wet’suwet’en hereditary chief: 'Reconciliation is not at the barrel of a gun'

Wilson-Raybould could have effected change in Indigenous Services: leaders