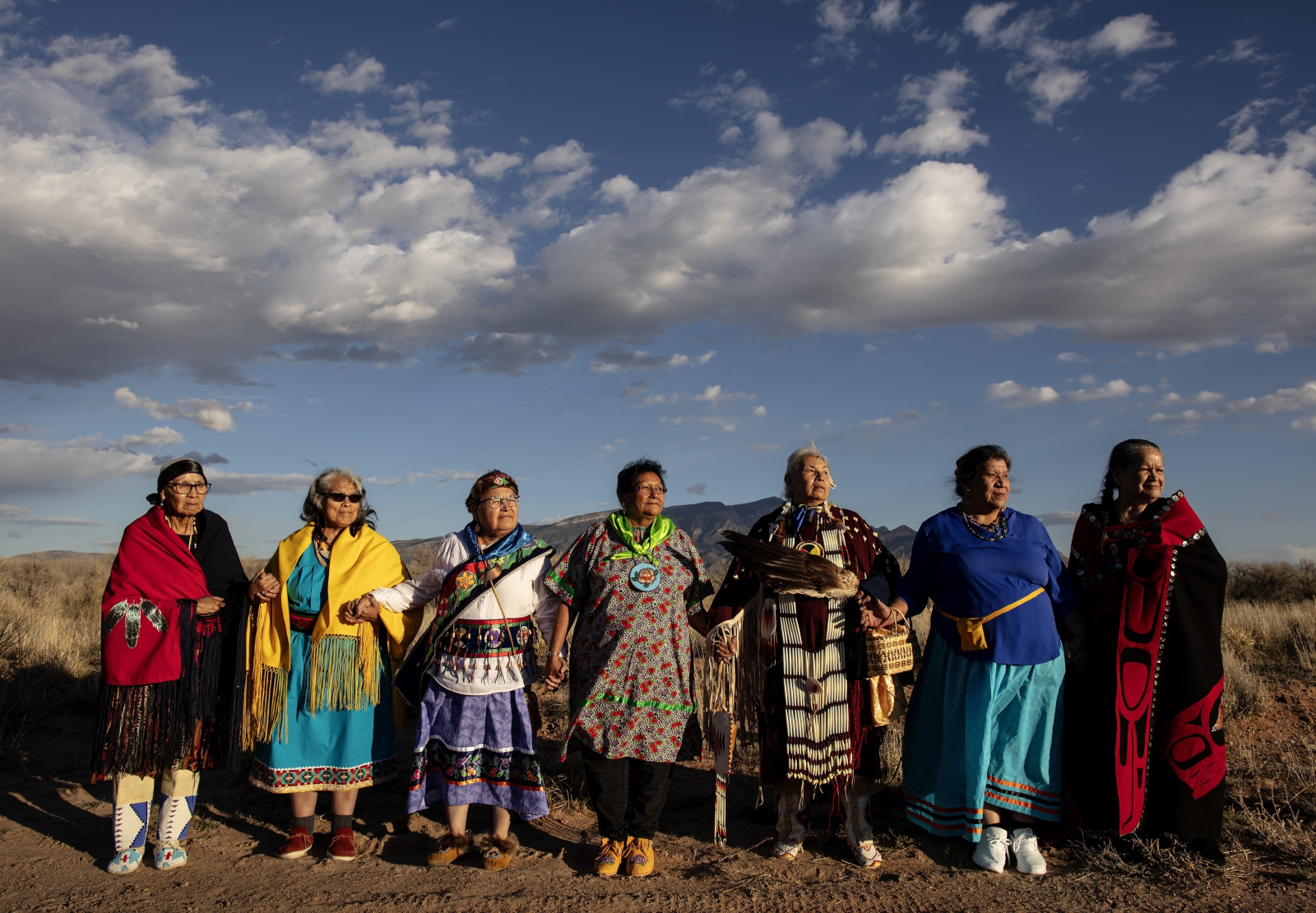 A group of eight North American Indigenous elder women, weathered in front-line resistance, fluent in their languages and rich in traditional teachings, have joined forces to protect the sacred knowledge needed for future generations to face a climate in crisis.

The Spirit Aligned Leadership Program chose the eight women from over 200 applicants, from across North America, naming them as Legacy Leaders, acknowledging their lifelong commitments to their cultures and communities. It is the second circle of legacy leaders who will participate in the fellowship intended to strengthen their sisterhood, share their life teachings, and plan pathways forward.

The women are Haida, Cheyenne, Cherokee, Ojibwe, Ute and beyond.

The program, sponsored by Rockefeller Philanthropy Advisors, has their main offices in Akwesasne, Mohawk territory which straddles Canada and the United States at the corner of Ontario and Quebec. The program was created in 2017, to "elevate the lives, voices and dreams of Indigenous women elders who are working to heal, strengthen and restore the balance of Indigenous communities," according to their 2017 annual report (PDF).

After the women knowledge-carriers are chosen by a selection committee, they are brought together for an inaugural gathering, and supported over three years in determining, planning and realizing their visions for protecting and sharing their bundle of knowledge.

The first year of the program focuses on strengthening the relationships between the matriarchs as well as providing support to articulate their goals. The second year identifies partner organizations, traditional societies, families, as well as safe and appropriate storage spaces. The third year of the fellowship, the women are supported in bundling their content, bringing their knowledge together in a culturally appropriate way, producing presentations, finalizing terms of access and intellectual property, and creating a plan for the future use of the content.

"These are real critical times that we're living," program director Gail Small told National Observer in an interview. "A lot of these women, the impact they have, from their living legacy and the knowledge they carry forward can be so helpful."

"Their knowledge gives force of strength to younger generations, to know and see who these women are and the work they're doing for them, and just to know these women are out there," she said.

Small's English name is Gail, and she has two Cheyenne names. Her birth name means 'Woman Standing in the Forest' and her adult name means 'Head Chief Woman.' Small was raised on her mother’s Spotted Elk homeland along Lame Deer Creek, where she and her husband of 32 years built their home. She graduated from the University of Oregon School of Law and the University of Montana.

"Indigenous women elders who have acquired knowledge over their lives speaking their languages and defending their homelands, are now trying to protect and pass teachings on to younger generations," said @ProgramSpirit's Gail Small.

Small credits growing up among a family of matriarchs as her greatest education. She believes that these Indigenous women carry sacred knowledge with a global impact. Seven of eight legacy leaders are fluent in their Indigenous language. One of those seven speaks multiple Indigneous languages.

One of this year's legacy leaders is GwaaGanad (Diane Brown) of Haida Gwaii, an archipelago off the northwest coast of British Columbia.

Brown grew up among her elders, speaking the Haida language and learning the teachings of her ancestors, the announcement of this year's legacy leaders states (PDF). It said Brown played a vital role in standing with her community to stop irresponsible logging practices on Haida Gwaii, and she has contributed to many language revitalization initiatives.

For its first eleven years, Brown co-ran the Skidegate Haida Language Immersion Program (SHIP). This year, nine of the elders involved in the program, including Brown, will receive honorary doctorates from Vancouver Island University, recognizing their lifelong commitments to the Haida language.

Brown acted in the award-winning feature film SGAAWAAY K'UUNA (Edge of the Knife), by directors Gwaai Edenshaw (Haida) and Helen Haig-Brown (Tsilhqot'in). Edge of the Knife is the first full-length feature film performed entirely in the Haida language. Brown provided language support as the cast and crew isolated themselves in a full Haida language immersion program, in preparation for the film. The film has been a stunning example of what happens when Indigenous people direct, product, act in and share their own story, in their own language, rooted in cultural protocol every step of the way.

Spirit Aligned's Small said Brown was chosen as a legacy leader due to the tremendous knowledge that she acquired from being a health worker in her community for a number of years, as well as being an advisor to the chiefs of her community, who wrote the reference letter for Brown's application. Small said she was inspired that the chiefs recommended Brown and that one said "anybody would want Brown in their corner."

"She also lives off the land, and she always tell us that 'there's no better way to nurture your own spirit than to go out with the children of the community and gather from the sea and eat it right there on the beach.' One of her goals is to put tremendous effort into passing her knowledge on to the children," Small said.

Small said the program wants to uphold these women in the last era of their lives.

"We want to support them in taking care of themselves and nurturing their own spirit, as well as help them realize how important they are," Small said. "Not just to their family, or their tribe, but to the world."

These legacy leaders are a gift of knowledge who carry teachings which could impact the trajectory of the world, Small said, knowledge relevant to climate change, human rights, environmental justice and international peace movements.

She said the women chosen as leaders have impressive activist credentials. Brown was one of the key warriors who protected Gwaii Haanas (a Haida heritage site) from industrial logging, which led to the 1993 Gwaii Haanas Agreement, and more recently, the 2010 Gwaii Haanas Marine Agreement (and the Gwaii Haanas National Marine Conservation Area Reserve)—with the federal government.

"Most of us in Indian Country, and throughout Canada and the U.S., we understand that to protect your way of life, you often have to be the one standing up and taking that hard road, and it takes a toll on you," Small said.

Standing up to uranium mills, loggers

Another one of the leaders, Thelma Whiskers, co-founded White Mesa Concerned Community to protect her Ute homelands and people from uranium poisoning. Whiskers has been fighting a uranium mill her entire life.

She makes cradleboards for newborn babies, and she has to go out and gather the necessary plants, weeds and willows for the traditional baby carriers, all of which have been contaminated, threatening her ability to practice her culture. Whiskers organizes and testifies in various justice forums urging people to take action for a nuclear-free future, Small said.

"These women are activist leaders and their work is intergenerational. They're heavily focused on the young people. They want young people to know that they're supported in taking the risks," Small said. "Standing up to a uranium mill or a logging company, these elder women have done that, and they want younger people to be inspired by that."

Other legacy leaders (seen in photo above) include Jennie Seminole Parker, who is Northern Cheyenne from the Tongue River area of Montana. She once returned the Cheyenne flag to its homeland, symbolizing the completion of a journey home that many of their relatives, under assault by United States military forces, did not survive in 1879.

Onita Bush is a Cherokee root doctor and a medicine woman for her community of Mountain Creek, North Carolina who "has been utilizing traditional ecological knowledge before Western science had a name for it," according to her bio.

Sharon Day is an Ojibwe "water walker," leading women in ceremony to offer healing and raise awareness about water issues around the country. She cares for the Saint Paul, Minnesota indigenous community through her work as executive director of Indigenous Peoples Task Force.

Faith Spotted Eagle, Ihanktonwan Dakota, is a matriarch of the Brave Heart Society, which has revived a sacred coming-of-age ceremony for teen girls. Faith’s community was completely flooded by the US Army Corp of Engineers when she was a child, influencing her lifelong commitment to activism and protecting the sacred.

"The work of these women is a living legacy, not a museum-type legacy, and it's not something they personally own," Small said. "They have acquired this knowledge through lifetimes of living among their people, their cultures, their ways, and now they're trying to add water to the river, to keep it alive, and keep it going."

Spirit Aligned Gathering at Tamaya 2019 from Ramona Emerson on Vimeo.