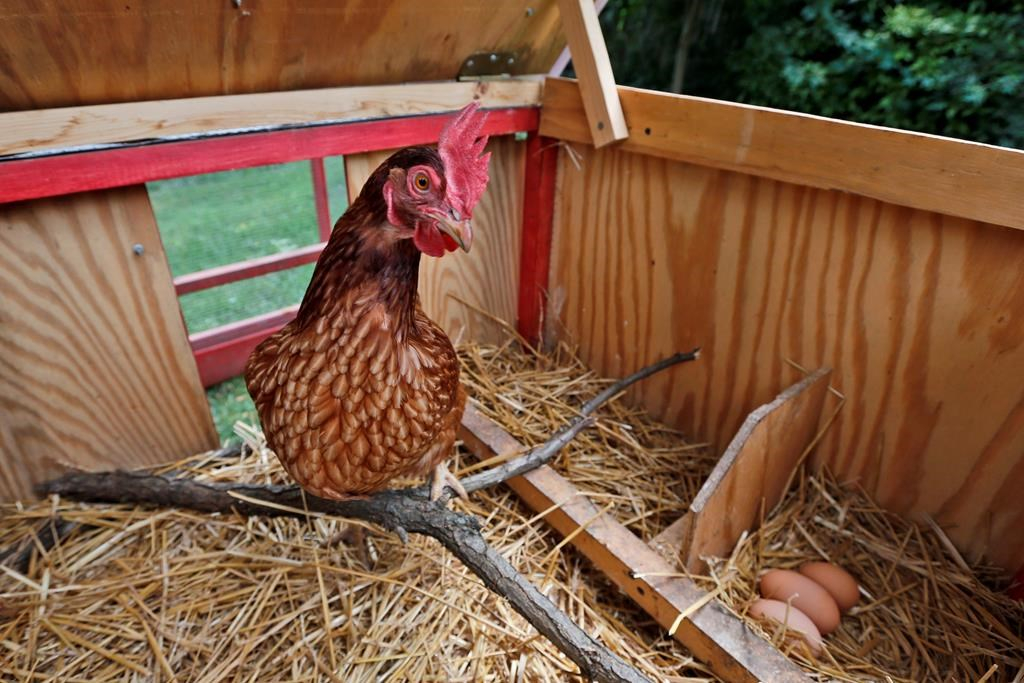 A chicken stands by three eggs in a portable chicken coop owned by Sandy Schmidt, in Silver Spring, Md., on Sunday, Aug. 11, 2013. File photo by The Associated Press/Charles Dharapak
Previous story
Next story

Animal welfare officials in Montreal are adding chickens to the list of abandoned creatures landing at their doorstep.

While dogs, cats and rabbits are par for the course, it appears a recent rise in urban farming has led to an increase in the number of unwanted chickens.

A spokeswoman for the Montreal branch for the Society for the Prevention of Cruelty to Animals says Montreal reported 20 abandoned chickens in 2016, and last year there were 38.

Anita Kapuscinska says part of the problem is that a lot of people don't know what they're getting into when they decide to begin backyard egg production.

In some cases they fail to consider what they'll do once the chicken stops producing eggs, or if they end up with a rooster.

Kapuscinska says the SPCA does not encourage urban chicken farming, even though the practice is driven by not wanting to encourage factory farms.

Urban animal husbandry is just like the rural variety, only harder. No domesticated (read captive) animal can look after itself when it is out of its natural element. When humans domesticated animals they also enslaved themselves - to the needs and welfare of their flocks, a source of sustenance; as opposed to the freedom of the hunter gatherer lifestyle.

As for Coq au Vin, first you have to catch, then kill the chicken -de-feather it, butcher it, and only then can you add the wine - unless you have been fortifying yourself with it through the preliminary steps. And if so, by the time you reach the cooking stage, there is a good chance you will commit a major cock up (pun intended) with the pitiful remnants of the noble bird.