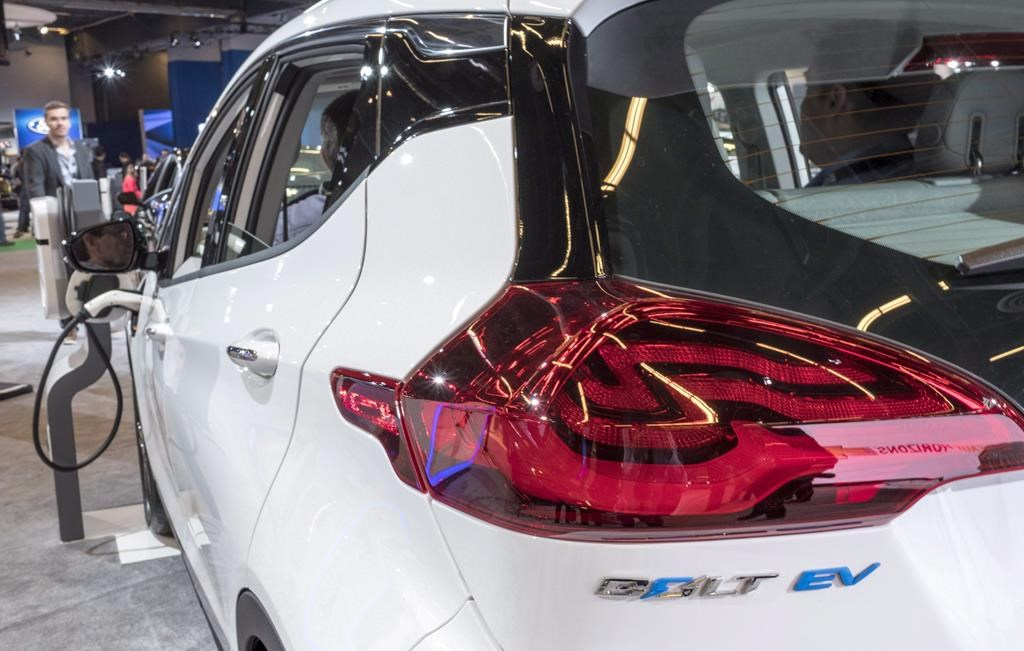 A Chevrolet Bolt electric car is seen during media day at the Montreal International Auto Show in Montreal on January 19, 2017. File photo by The Canadian Press/Paul Chiasson
Previous story
Next story

The federal government has started to give away money to encourage people to buy electric cars, but before long it will have to decide how far it will go to force the market towards lower-emission vehicles.

The electric vehicle rebate program launched May 1, giving up to $5,000 back to buyers to help them afford zero-emission vehicles which have higher up-front costs but long-term financial and environmental benefits.

Ottawa, however, is still thinking about whether it will stick with ambitious future emission standards, which would potentially add up-front costs to all vehicles sold in Canada with the promise of lower emissions and long-term savings.

A decision is needed because the U.S. Trump Administration has said the requirements are too stringent and will be lowering them.

Canada has matched U.S. standards since 2011, and will have to decide whether to match new U.S. requirements expected to be announced in late spring or early summer, or to align itself with California and other states that have vowed to maintain the current standards.

Canada's auto industry has urged the government not to create separate emission standards for Canada and the U.S., while environmental groups say maintaining the current regime is crucial to meeting climate change targets.

The federal government is still in consultations, but it says it is open to following California in maintaining the current standards.

"Canada is looking at following the actions of California and other like-minded U.S. states as we move forward on Canada's mid-term evaluation," Environment and Climate Change spokesman Mark Johnson wrote in an email.

"Clean cars are a key part of Canada's climate plan to fight climate change," he said.

A decision on whether to maintain the standards, which call for making cars about five per cent more efficient per year, and light trucks 3.5 per cent and later five per cent per year, will come as Canadians increasingly buy larger, heavier vehicles.

The trend towards SUVs, crossovers and pickups that make up the light truck category has helped make Canada's 2017 vehicle fleet the most fuel hungry per kilometre in the world, according to the International Energy Agency.

It found Canadian vehicles sold in 2017 consumed an average of 8.9 litres for every hundred kilometres, ahead of the 8.6 litres per kilometre in the U.S., 7.9 in Australia, and about 5.4 in France, Turkey, and India.

Since existing regulations will increase stringencies on light trucks, it's crucial that Canada keeps the current standards in place, said Annie Berube, director of government relations at environmental group Equiterre.

"The bulk of the emissions reductions that we're getting from those vehicle regulations are from models years 2020 going forward, because of specific technological developments and because the regulations are getting a lot more stringent."

The shift to bigger vehicles has, however, made it harder for auto companies to meet the increasing standards, which are based on the average of everything they sell.

Industry is pushing for an easing of regulations, but is still committed to continued improvement, said Mark Nantais, president of the Canadian Vehicle Manufacturers' Association.

"The industry is still looking for year-over-year improvement, and the question is just whether the slope of that line will be as steep as it was," Nantais said.

But as vehicles become more durable, which allow people to hold on to them longer, it's especially important to ensure significant improvements are maintained, said Berube.

"Unless that regulation is there to ensure that the next model year is even more fuel efficient, we're going to be missing in terms of big emissions gains from the fleet turnover that happens naturally as people replace their older vehicles."

But unlike California, Canada has an auto manufacturing base it must also consider.

If the higher standards are maintained, industry has said that companies may have to stop selling some less-efficient vehicles in Canada to meet the averaged standard.

"If you undercut the build where you sell proposition, maybe they don't build here."

He said the association advocates to go with the critical mass that best aligns with the product mix manufactured in Canada.

It's not yet clear which way Canada will go on the standards, but with such a complicated file and wide-reaching implications, Volpe said he appreciates that the government is committed to thorough consultations.

"I think they're being cautious, rightfully so."

By The Canadian Press | News, Politics | May 1st 2019
Reports from the Race to a Safer World

By Mia Rabson | News, US News, Politics | August 7th 2018
Reports from the Race to a Safer World

Am incredulous! Hard to

Am incredulous! Hard to believe this dialogue in that it is essential to reduce carbon emissions and vehicles that can do this must be available on the market. They are not. A most limited supply.
The adage "if you build it, they will come.." is correct.
Clean cars are a huge part of what is necessary to curb climate change. Threats from the auto industry that clean cars are more expensive hence may have to move plants out of Canada are appalling. The auto industry should be all over this one and, frankly, all of the vehicles for 2020 should be a variable of 'clean'.

I have been trying to change my car for a hybrid and it is not easy in Toronto. Very little on the market. The Government should be insisting, insisting that cars sold in Canada must meet new emissions standards.