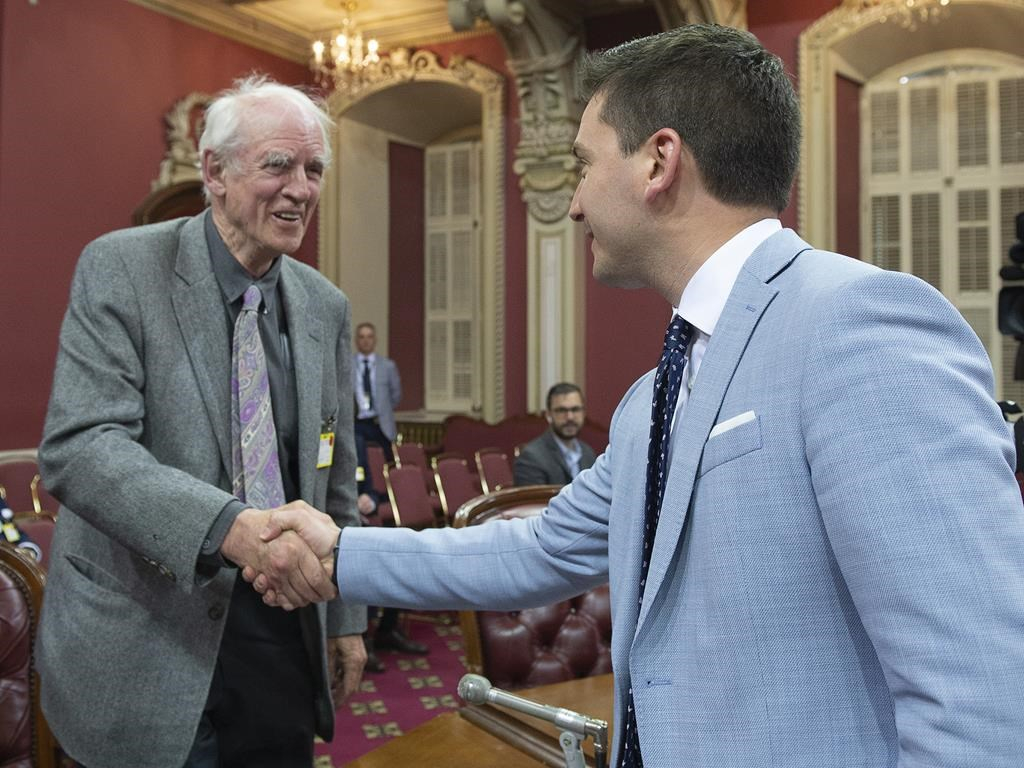 Charles Taylor is greeted by Simon Jolin-Barrette as he arrives at a legislature committee studying a bill on secularism, on May 7, 2019 at the legislature in Quebec City. Photo by The Canadian Press/Jacques Boissinot
Previous story

A second prominent intellectual has told the Quebec government it is going down the wrong path with its secularism bill, saying there is no compelling reason to lump teachers among the public servants who'd be prevented from displaying their religious beliefs at work.

Historian Gerard Bouchard was critical of the government's decision Wednesday, telling assembled lawmakers that no scientific evidence exists to show that teachers wearing religious symbols would indoctrinate or traumatize students.

"If we turn to the prohibition of the wearing of religious symbols among teachers, I wonder where is the higher motive that would justify this intervention?" Bouchard asked during legislature committee hearings. "Frankly, I do not see it."

The Coalition Avenir Quebec government has said its proposed legislation is inspired by a 2008 report written by Bouchard, a historian, and philosopher Charles Taylor. That report recommended that public sector employees wielding coercive authority — such as judges, police officers and prison guards — be prohibited from wearing religious symbols on the job.

Bouchard said that if the government limited its restrictions to coercive state representatives such as police officers and prison guards, it would solve part of the problem. But he said Bill 21 is also problematic because it doesn't clearly state who will enforce the rules or what the sanctions will be.

The Legault government has been heavily criticized for the pre-emptive use of the notwithstanding clause in Bill 21 to override potential constitutional challenges brought by people claiming their rights and freedoms have been infringed.

The proposed law is unlikely to end the debate, as the government hopes, and instead will only revive the issue, Bouchard said.

"We're not talking about discrimination. We're talking about a situation where, because of their role, it won't be possible to wear a religious symbols," Jolin-Barrette told reporters.

Bill 21 would prohibit public servants deemed to be in positions of authority — including teachers, police officers, Crown prosecutors and prison guards — from wearing religious symbols on the job. A grandfather clause would protect people already hired in those positions as long as they don't switch jobs.

Jolin-Barrette said other parties tried unsuccessfully to deal with the question of state secularism. "We think our approach is moderate, pragmatic, and above all, applicable," he said.

On Tuesday, Taylor said the bill would "end the careers" of certain people and make it more difficult for them to integrate into Quebec society, creating feelings of alienation and division.

Following the murder of six Muslim men in a Quebec City mosque in 2017, Taylor disavowed his earlier position on restricting religious symbols. He now says the debate has led to the stigmatization of religious minorities.

A major Quebec teachers' union told the committee that the secularism bill is an example of "wedge politics" seeking to create division.

"For us, the desire to include teachers on the list of government agents covered by the ban on the wearing of a religious symbol is simply not convincingly justified by the government," the Centrale des syndicats du Quebec said in a written brief presented Wednesday.

The union also called the use of the notwithstanding clause unjustified.

"In doing so, the government is dangerously trivializing its use and preventing us from performing our duty of representation," it said.