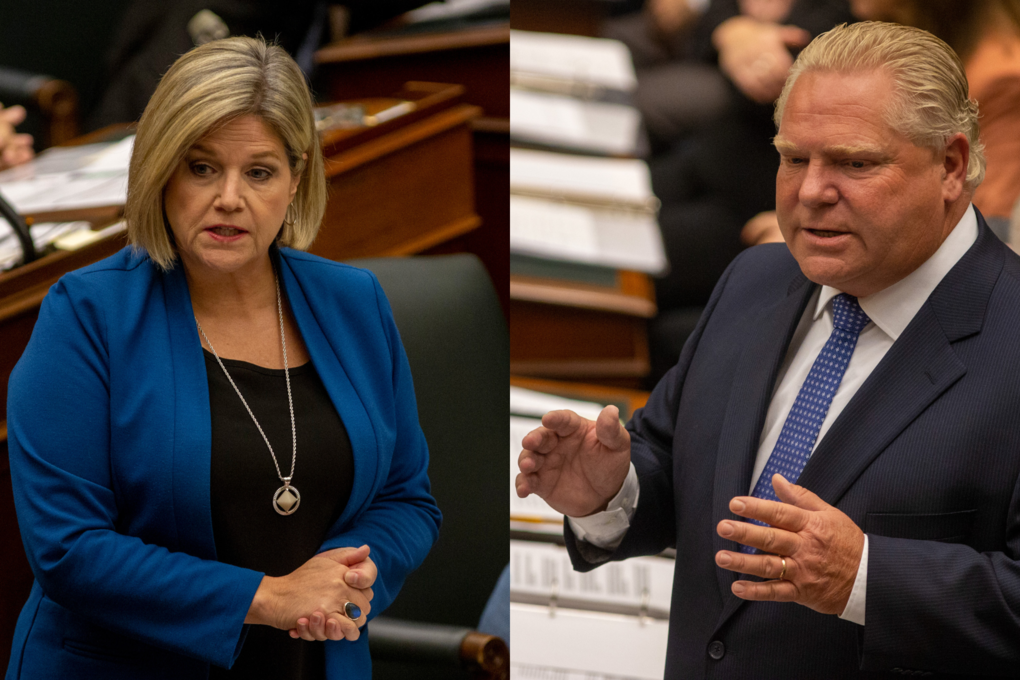 The NDP wants Ontario to declare a climate change emergency but Premier Doug Ford's response was another attack on the federal carbon tax as "one of the biggest climate crises right now."

Ford made the remarks in the legislature Thursday after the New Democratic Party tabled a motion to declare a climate emergency in the province. If the Official Opposition motion was adopted, Ontario would be the first Canadian province or territory to declare a climate emergency, following a trend of such declarations by municipal councils in Ottawa, Vancouver, Halifax, Hamilton and Kingston.

“Declaring a climate emergency is an opportunity for Queen’s Park to change direction, and take on the biggest challenge humankind has ever faced,” NDP leader Andrea Horwath said in a statement.

In total, Premier Ford and other members of his government spoke about the carbon tax 28 times during Thursday's question period, touting their fight with the federal government in response to the NDP motion and to unrelated questions about heath care, cuts to paramedic services, and the province's relationship with municipalities.

"It became clear to us that we need to respond as other jurisdictions have, to recognize this is not a distant problem but an immediate problem," Tabuns said in an interview. "We think what's being done in our province is completely inadequate and that's why we want to declare a climate emergency."

This is unlikely to happen, however, without the support of the Progressive Conservative majority government, which has, since coming to power, cancelled climate change mitigation programs including Ontario’s participation in a billion-dollar cap and trade market that funded green energy programs, as well as energy conservation programs, green vehicle rebates, electric vehicle charging stations, and a program to plant 50 million trees.

Tabuns believes the NDP motion is a chance for the Ford government to "rethink" its position on climate change policies.

"Ford was in Ottawa. He was in Muskoka. He's seen the impact," Tabuns said, noting that these were Tory-held ridings whose MPPs had not recognized the scale or speed of the climate crisis. "But whether he is supportive or not, this is the position that Ontario should be taking."

This is the #ONDP #ClimateEmergency resolution that will be debated between 130 pm and 430 pm on Monday May 13th. We need to act now to deal with this fast moving #ClimateCrisis . @climatekeith @iamdavidmiller pic.twitter.com/DSuMdSCj48

When Ford was asked if he would support the motion with a "yes or no" question during Thursday's question period, the premier deflected by speaking about Ontario's fight against the federal carbon tax.

"I’ll tell you, one of the biggest climate crises right now is burdening the backs of businesses, burdening the backs of the people day in and day out with this terrible, terrible carbon tax. We’ve proved to the federal government we don’t need a carbon tax to be environmentally friendly. Our Minister of the Environment has put together a solid plan, a great plan, to make sure we’re environmentally conscious, to make sure we go after the big emitters," Ford said.

He touted government cancellation of the White Pines Wind Project that he claimed "made a lot of people happy."

"It’s unfortunate we can’t cancel the rest of them—driving up costs anywhere from 14 cents per kilowatt to 40 cents," Ford added, referring to the remaining green energy projects in the province, which he said are "gouging the people."

"There has never been a bigger transfer of wealth from the hard-working people of Ontario to the political insiders than these energy projects," Ford said.

"We believe in climate change," the premier admitted, "but we also believe in supporting companies and people to create jobs. The carbon tax is the worst single tax you could put on the backs of the people of Ontario."

Tabuns said the Conservative government doesn't seem to want to mitigate the impacts of climate change.

"They don't have a credible (climate) plan," Tabuns said. "They're just paying lip service. They're saying 'yes we have a climate plan and yes it's an issue,' but they're spending all their time fighting the federal government instead of actually working in Ontario to put in place what's needed to dramatically reduce our emissions and actually protect the people of this province."

"They've got entirely the wrong focus. They're not thinking about what's critical but what's in their partisan advantage."

Flooding, tornadoes, wildfires — Ontarians can see the devastating consequences of climate change across our province.
Climate change is happening now and we need to take immediate action.
Today, New Democrats are calling on the province to declare a climate emergency. pic.twitter.com/EhUk4Xfqms

Ford refuses to take stand on anti-abortion rally, choosing to decry the carbon tax instead

Progressive Conservative MPPs joined an anti-abortion rally gathered outside the Ontario legislature Thursday morning, with MPP Sam Oosterhoff telling the crowd "we pledge to fight to make abortion unthinkable in our lifetime."

Here's the end of @samoosterhoff's comments at the anti-abortion rally today, where he pledges to “fight to make abortion unthinkable in our lifetime,” while protesters chant “shame." #onpoli pic.twitter.com/c9kswR9Gql

Inside Ford refused to answer questions about whether he supports a woman's right to choose and if he denouces such comments. Instead, the premier deferred the question to Energy Minister Greg Rickford who replied that the government was "concerned" about the "job-killing, regressive carbon tax."

"I would like to go back to the Premier. I fail to see how this had anything to do with the question that I asked. The Premier has been less than clear on this issue. He has courted the support of the anti-choice activists. I’m asking him this morning, will he stand here today and say that he refutes his MPPs’ comments and supports a woman’s right to choose?"

Ford deferred again to Rickford who said: "We're concerned about a $27-million cut the federal government has made by invoking the job-killing, regressive carbon tax on our health care system here in Ontario."

(After question period, the premier's spokesman, Simon Jefferies, sent a statement to reporters noting: “The Ontario PC Party is a big tent. We welcome members from a wide variety of backgrounds and beliefs. Our government is focused on protecting what matters most, cleaning up a fiscal mess left behind by the Liberals, making Ontario open for business and open for jobs, and lowering taxes for families. The Government will not re-open the abortion debate.”)

Ontario Liberal interim leader John Fraser told National Observer in an email that the premier's response was "actually quite bizarre."

"The government is clearly focused on campaigning for Andrew Scheer," Fraser said. "It was disrespectful of the premier to refer a question regarding women's reproductive rights to the minister of energy, who responded with an attack on the federal carbon tax."

In another instance, the premier was asked why the government had eliminated 42 of Ontario's 52 land ambulance services. Ford responded by saying this wasn't accurate (it is) and touted his government's decision to scrap "the cap-and-trade carbon tax":

"I’ll tell you what’s accurate, Mr. Speaker: On June 7th, this province voted for change. They voted for a government to come in there and be fiscally responsible. And on June the 15th, the first thing we did, we announced we would scrap the cap-and-trade carbon tax, a carbon tax that is now implemented from the federal government that jacked up the gas prices, jacked up heating costs, jacked up everything in the stores. As a matter of fact, there was a convenience store we went into, and he was there re-pricing all the goods because of this terrible, terrible carbon tax."

When Ford was asked about the government's decision to slash funding for municipalities, the premier replied that this, too, was an "inaccurate statement," and then proceeded to talk about his support for the automotive sector that began when his government "introduced legislation to end the cap-and-trade carbon tax once and for all."

Pretty shameful. In an era

Pretty shameful. In an era of rapidly advancing climate change, Ford sees opportunities, not emergencies. What's more frightening, he obviously believes that the people of Ontario will tunnel vision along with him and focus solely on removing a federal tax, while Form himself removes all kinds of health and educational services on the ground.

And for sure. Women's rights to just about anything are small change compared to what he's going to save Ontario by going to court against the carbon tax. A one trick pony...or at the very least, he's working hard to appear as one.

In what way will sending the

In what way will sending the Federal government billions of taxpayer dollars put a halt to climate change. Do you really believe Mr. Trudeau? Does his track record of promises and promises kept make you feel confident he'll do what he says? Has he been a leader exemplifying fiscal responsibility? He said the cupboard was bare to our Veterans while he continued to hand out millions around the world.