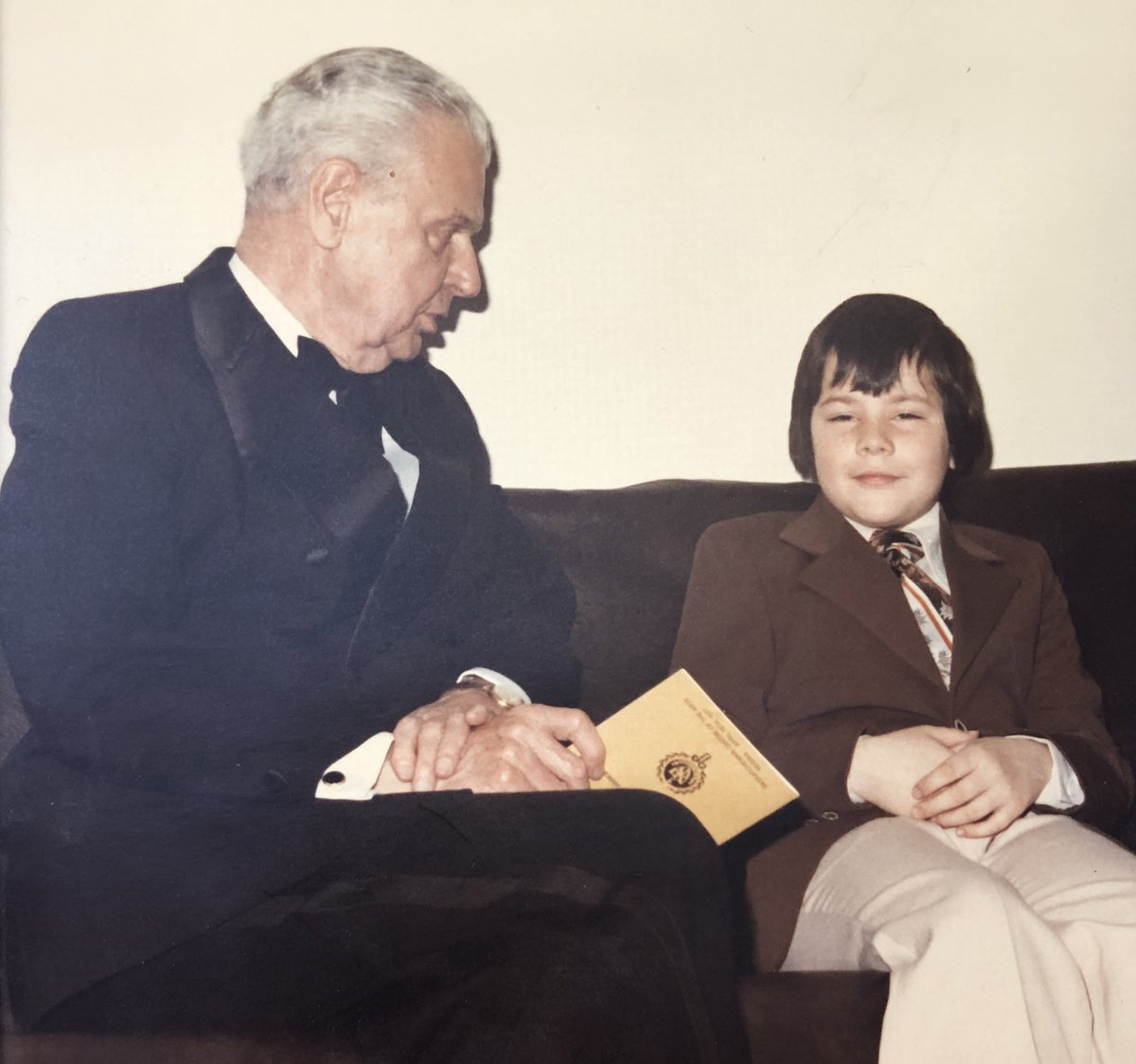 Former prime minister John Diefenbaker chats on a couch with a young Jason Kenney in Wilcox, Sask. on April 15, 1977, one month before Kenney's ninth birthday. Photo posted on Twitter by Jason Kenney
Previous story
Next story

On the day he assumed office, freshly minted Alberta Premier Jason Kenney — widely expected to take a run for prime minister some day — tweeted a 42-year-old photograph of himself as a boy sitting on a couch beside a Canadian political icon.

“When I was nine, former Prime Minister John Diefenbaker sat down and chatted with me for 10 minutes,” Kenney recalled in the tweet. “That conversation kindled in me a deep interest in public service, which has brought me to this day.”

Kenney was eight. A zoom on the program in Dief’s hand reveals the event at which the young Kenney, in a classic ’70s brown boy-suit and tie, met the man who at that time had been Canada’s only Conservative prime minister (1957-1963) since the Great Depression.

On April 15, 1977, the Wilcox, Sask.-based private Catholic high school Notre Dame College held a $100-per-couple fundraising gala at the Saskatchewan Centre of the Arts in Regina. Diefenbaker, just two years from the end of his life but still a member of Parliament, was the keynote speaker.

When I was nine, former Prime Minister John Diefenbaker sat down & chatted with me for 10 minutes. That conversation kindled in me a deep interest in public service, which has brought me to this day.

Thank-you for being kind to a young lad, and an inspiration, Mr. Diefenbaker! pic.twitter.com/tmUCJwBrrs

In a 2013 interview with the Toronto Star, Kenney told the same story about meeting Diefenbaker and more tentatively suggested: “It probably had some kind of an impact on me.” By the time he repeated the anecdote to a Canadian Press reporter just ahead of the April 16 Alberta election, Kenney was sure the Diefenbaker encounter had “made an indelible impression on me.”

We shouldn’t be too surprised by the sharpened memory, the intensified sense of significance about his boyhood brush with political fame. Kenney’s perceived destiny — his journey from that meeting with Dief to becoming leader of a province bigger than France, and who knows what next — might only recently have come into clear focus for the 50-year-old politician. How can any of us know what our destiny always was until we reach a landmark destination?

But make no mistake: the inference in Kenney’s tweet is that destiny had a hand in his rise to power, that this was the fulfillment of prophecy. We are encouraged to believe that Kenney’s 1977 conversation with the 81-year-old titan of Prairie conservatism had in some way preordained the United Conservative Party leader’s provincial election victory (and whatever might follow).

In mythic terms, Diefenbaker was Dumbledore to Kenney’s Harry Potter, minus the old wizard’s beard and the blessed boy’s forehead scar. This was NHL legend Gordie Howe christening a 10-year-old Wayne Gretzky as the next Great One — upturned stick-blade tucked under the lad’s chin in that famous photo of the night hockey’s past met its future at a 1972 Kinsmen banquet in Brantford, Ont.

It’s the symbolic passing of the sceptre, the wand, the Sher-Wood. This is the deep-rooted stuff of universal human culture, but it’s a particularly common trope in the world of political leadership.

In the case of Kenney’s memorable meeting with Diefenbaker, it’s possible to be simultaneously touched by the story — which is clearly important to the new Alberta premier and ex-federal cabinet minister — while being curious about how and why he’s sharing it with Canadians, what he might want us to feel about it and what details the picture doesn’t capture.

Last year, Kenney attacked Prime Minister Justin Trudeau as an “empty trust-fund millionaire.” He later apologized for the remark, perhaps because one shouldn’t be disqualified from a life in public service for having a privileged upbringing — say a private school education in a college run by your father, or a celebrity grandfather, the kinds of connections that might lead to a boy enjoying a quiet conversation with a former prime minister.

It’s worth noting, too, that the photo with Dief — the Western Tory warhorse whose mantle Kenney can now reasonably claim to have taken up — doesn’t effectively illustrate the years Kenney later spent as a Liberal party supporter captivated by the “startling charisma” of Pierre Trudeau (as Kenney once put it).

Politicians, remember, are strategic storytellers. And especially powerful one is the anointing-of-the-future-king narrative, its central event imbued with retroactive meaning, its purpose to create an air of inevitability around a young hero’s eventual ascent to glory.

Think about the way then-Arkansas governor Bill Clinton and his campaign strategists employed photos and videos of his 1963 Rose Garden encounter with U.S. president John F. Kennedy to help boost his own successful 1992 run for the White House.

The 16-year-old Clinton, his state’s representative at a “Boys Nation” youth leadership summit in Washington, can be seen at the front of a well-groomed crowd of male teenagers reaching forward to greet the Camelot King just months before his assassination.

“The picture of the two shaking hands was everywhere in that (1992) campaign,” recalled The American Prospect columnist Paul Waldman in a 2008 essay titled The Triumph of Narrative. It was “almost as if Kennedy's last act before being struck down was to single out the young Clinton and pass the fate of the earth to him, an electric charge of destiny coursing from the hand of the great and doomed king to the boy who barely knew what awaited him.”

In Canada, such retrospective foreshadowing of political greatness was recently on display when various news outlets replayed footage from a March 1983 constitutional conference in Ottawa showing an exchange between then prime minister Pierre Trudeau and B.C. First Nations leader Bill Wilson, the father of future federal justice minister Jody Wilson-Raybould, just 11 years old at the time.

Wilson told Trudeau he had two daughters back in B.C., “both of whom want to be the prime minister.” The PM joked that he would “stick around ’til they’re ready.” Wilson replied: “One of them could be out here on a plane this evening.”

Trudeau’s son Justin, Canada’s current prime minister, has a rich supply of anecdotes foretelling his rise to power, though the line blurs here — as it does with stories about the Bush and Kennedy families in the U.S. — between destiny and dynasty.

One is the so-called "Nixon Prophecy" from U.S. president Richard Nixon's state visit to Canada in April 1972, when baby Justin (born on Christmas Day, no less) was not quite four months old.

During a gala dinner at the National Arts Centre in Ottawa, Nixon raised his glass of champagne and said: "Tonight we'll dispense with the formalities. I'd like to toast the future prime minister of Canada — to Justin Pierre Trudeau."

Great story about a state visit, an NAC gala, how Nixon predicted Justin Trudeau would be PM https://t.co/rxAicxCH2I pic.twitter.com/5OAzmzi1K1

We also have baby photos of wee @JustinTrudeau from the Nixons' visit to Canada in April 1972. pic.twitter.com/wPRESIV331

For former PM Jean Chrétien, an important source of inspiration for his political career — as he was fond of recounting — was the family lore about the day his father, Wellie Chrétien, shook hands with Sir Wilfrid Laurier.

It was an experience, Chrétien once said that his father “cherished for the rest of his long life,” and which had a “personal influence” on the future prime minister, who described Laurier as a “guiding light and constant presence . . . through my 40 years in public life.”

A variation on the theme is a 1967 photograph in which Chrétien, Pierre Trudeau and John Turner — three ambitious cabinet ministers in the Liberal government of Lester B. Pearson — are all shown in the presence of the prime minister whose position they would each eventually occupy. These weren’t kids meeting their hero, but the picture has become an archetypal image of Canadian political destiny.

During the short time Turner served as prime minister in 1984, a story coincidentally emerged about how — nearly 20 years earlier, on a beach in Barbados during a recess in Parliament — Turner had saved Diefenbaker from drowning.

Partisan differences aside, news of the vacation salvation of a former PM seemed to underscore Turner’s suitability for the same job, to affirm that fate was at play all along in his erratic political trajectory.

Diefenbaker, in fact, is at the centre of Canada’s most famous story of a prime ministerial encounter with a youngster bound for greatness. There’s even a statue in Saskatoon commemorating the purported moment in July 1910 when a 14-year-old Diefenbaker — then a humble newsboy hawking papers at the downtown train station — is said to have sold one to Laurier when the prime minister arrived in the city for a cornerstone-laying ceremony at the fledgling University of Saskatchewan.

“Laurier paid him twenty-five cents, inquired about the youngster’s business career, and expressed the hope that the boy would be a great man one day,” author Peter C. Newman wrote in his classic study of Diefenbaker, Renegade in Power. “‘There we were,’ Diefenbaker loved to recall, ‘the Prime Minister of Canada and a newspaper boy. He told me something of his dreams for Canada and I told him of my youthful ideas.’”

Diefenbaker appears to have first told the story during his breakthrough 1957 federal election campaign. Reporters covering the Tory leader’s speech in Midland, Ont. that May described how Diefenbaker had “revealed a deep dark secret” about the moment his “interest in politics was born” — and Dief’s tale about meeting Laurier in 1910 “brought smiles of satisfaction to Liberal adherents.”

During the 1963 campaign that ended Diefenbaker’s run as PM, he again recounted the Laurier story and proudly told a crowd of Quebec voters: “Neither of us dreamed then that I would be one of his successors.”

In 2017, the late Regina author Garrett Wilson claimed in his book Outlier: Life, Law and Politics in the West that the story is “false history” and that Diefenbaker fabricated the yarn to create an aura of political predestination around himself.

“There is nothing to support this whatsoever,” insisted Wilson, who also called for the statue and a plaque commemorating the “bullshit” 1910 encounter to be removed from a Saskatoon street corner.

That didn’t happen. An editorial in the Saskatoon Star-Phoenix — the newspaper that had paid for the installation of the statue in 1990 — defended “Wilson’s right to question Diefenbaker’s account of this childhood memory.” But without iron-clad evidence to disprove Dief’s story, “the statue should remain in place.”

Kenney’s photo leaves no doubt about the fact that he met Diefenbaker in ’77. And if we allow sentiment to overrule reason, we can even imagine Dief passing on to Kenney the very torch of leadership that he claimed to have received from Laurier so many years before, regardless of the divergent party affiliations.

Kenney has spoken about his Diefenbaker encounter many times. It was referenced as early as a 1995 Maclean’s profile of a certain young Alberta tax fighter beginning to make waves in Reform-era national politics.

Dief, we have since learned from Kenney over the years, apparently asked the brown-suited boy his name, then regaled the attentive lad with the story of Jason — the fabled Greek hero who led the Argonauts on a quest to find the Golden Fleece, ancient symbol of kingship.

It truly was a mythic moment.

Randy Boswell is a journalism professor at Carleton University and a former national writer with Postmedia News.

Politicians are a bunch of

Politicians are a bunch of charlatans and politics is a farce.