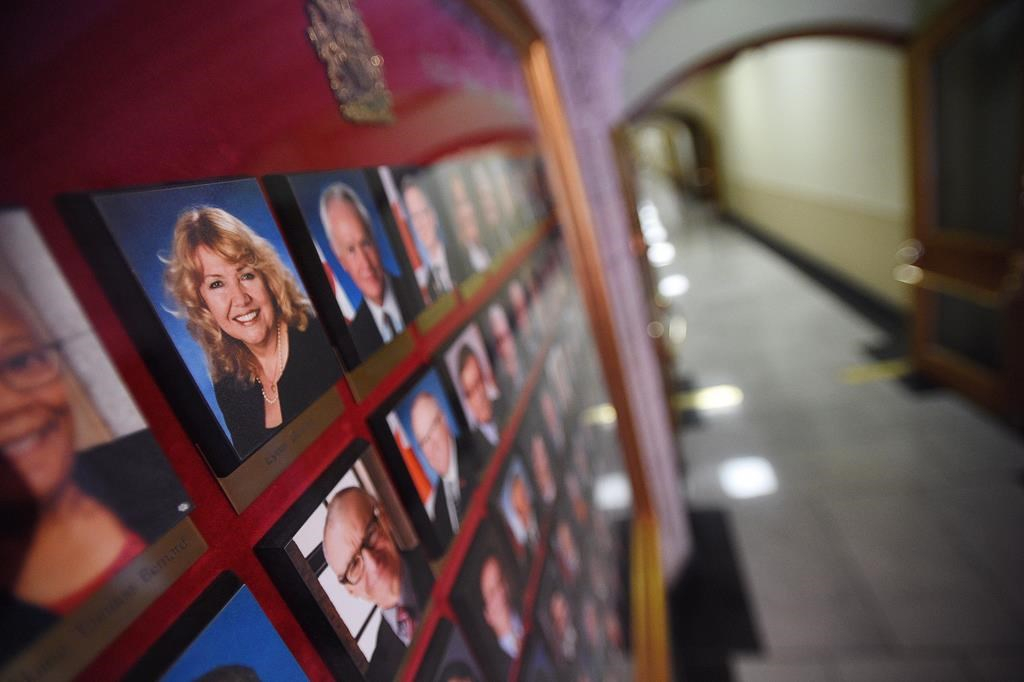 A picture of Senator Lynn Beyak accompanies other Senators official portraits on a display outside the Senate on Parliament Hill in Ottawa on Thursday, Sept. 21, 2017. File photo by The Canadian Press/Sean Kilpatrick
Previous story

Lynn Beyak cast herself as a defender of free speech and a victim of political correctness moments before senators voted summarily Thursday to suspend her without pay from the Senate for refusing to delete derogatory letters about Indigenous people from her website.

The suspension applies only to the remainder of the current session of Parliament; she'll be able to resume sitting as a senator when a new session begins following the Oct. 21 federal election.

However, if Beyak continues to refuse to comply with remedial measures recommended by the Senate's ethics committee, the upper chamber could consider further action against her in the future.

In a report last month, the committee recommended that Beyak be suspended, that she complete, at her own expense, "educational programs related to racism" towards Indigenous people; apologize in writing to the Senate; and delete the offending letters from her website. It also recommended the Senate administration remove the offending letters if Beyak doesn't do so herself.

In a speech just prior to the vote on the committee's report, an emotional Beyak pleaded for just one of her fellow senators to ask that the matter be adjourned until next week to give her colleagues time to consider it more carefully. No one stepped up and a voice vote to adopt the report was taken immediately without further debate. Conservative Sen. Don Plett asked that the vote be "on division," meaning some senators were opposed but would not insist on standing up one by one for a recorded vote.

Beyak, appointed to the Senate in 2013 by former prime minister Stephen Harper, was kicked out of the Conservative caucus last year over her refusal to remove the letters from her website.

In her speech, Beyak doubled down on her contention that there was nothing racist in the letters. She said her only sin is refusing to censor the free expression of Canadians and she called the proposed penalty "totalitarian" and unworthy of a free country like Canada.

"This is a critical day. Either senators are free to speak without fear of reprisal or we are not," she told the Senate.

"The only conduct or action that is condemned is my refusal to censor Canadians and shut down debate about sensitive issues on which Canadians have expressed various opinions."

The letters were posted in response to a 2018 speech in which Beyak argued that Indian residential schools did a lot of good for Indigenous children, although many suffered physical and sexual abuse and thousands died of disease and malnutrition.

The Senate's ethics officer, Pierre Legault, concluded in March that five of the letters contained racist content, suggesting that Indigenous people are lazy, chronic whiners who are milking the residential-schools issue to get government handouts. Beyak refused to accept Legault's order that she delete the letters and apologize to the Senate, which prompted the upper house's ethics committee and finally the Senate as a whole to subsequently take up the matter.

In her speech Thursday, Beyak cited a letter of support she received last week from a retired Manitoba judge who wrote that her "crime was refusing to go along with the politically correct version of the prevailing orthodoxy pertaining to Indigenous issues."

But Crown-Indigenous Relations Minister Carolyn Bennett tweeted that the issue "was never about political correctness — it's about racism that hurts people."

Is it just me or did anyone

Is it just me or did anyone else noticed that Stephen Harper seemed to really enjoy putting crappy people in important positions. In the Senate alone, there's Mike Duffy, Pamela Wallin, Linda Frum, Patrick Brazeau and this genius Beyak. That's not even getting to some of his less-than-stellar cabinet postings. What a strange mentality.

An authoritarian mentality and not that strange.....or unfamiliar at all. Harper appointed people who thought like him, or whom he was pretty sure wouldn't 'think' to challenge him. He himself may be too smart to voice every narrow idea he has, but it was under his watch that efforts were made to change the Indian act so native land was help privately, as if anyone could have any doubts about who would own it after a few more years of continued residential poverty. It should also be fairly obvious to most of us which sections of society thought that Saskatchewan farmer was in his rights to kill an inebriated native boy sitting in a disabled car...

Racism is an inevitable part of authoritarian privilege. Historically it is white folk, settler folk and their alpha males who have wielded that authority........that some of them still believe they were acting in the indigenous peoples best interest isn't at all surprising. Beyak is just too mouthy to realize things are changing, and from here on forward, the racism has to operate from the shadows....she thinks 'free speech' trumps a diversity of freedoms. She's not alone.

Finally!!! Something tells me

Finally!!! Something tells me that any "educational programs related to racism" will do nothing to change this woman's perspective. If that were so, she would have done so already by removing her acidic comments.
This is just one more indication of the DESPERATE need for ALL Canadians to GET INVOLVED in politics, especially now before October!!!