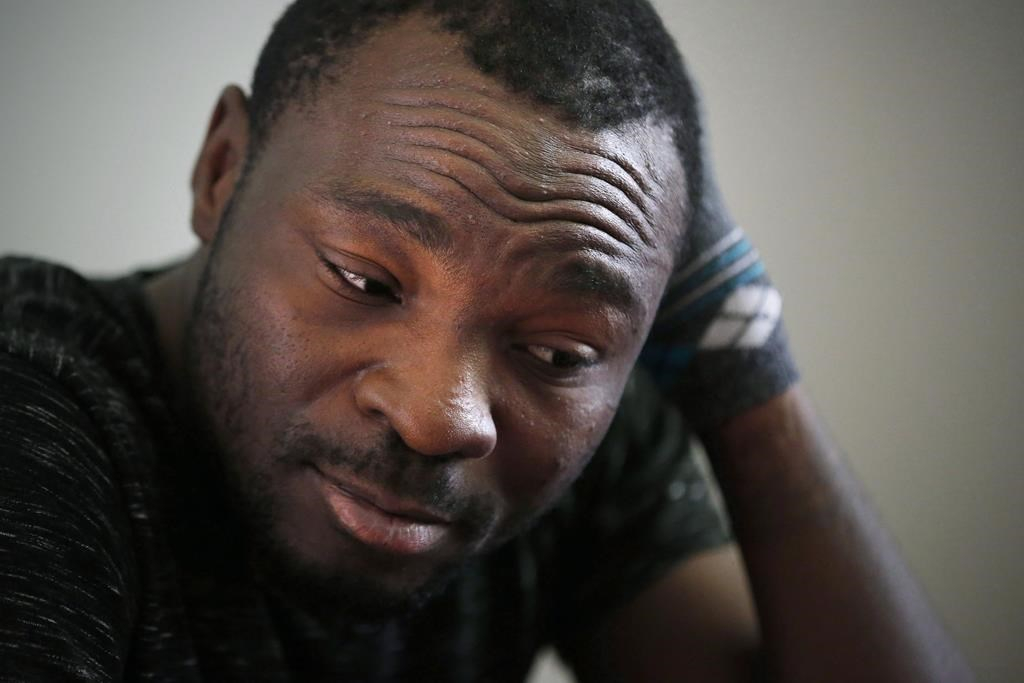 Seidu Mohammed speaks about his refugee claim acceptance in Winnipeg, on Thursday, May 18, 2017. File photo by The Canadian Press/John Woods
Previous story

A refugee from Ghana who lost all his fingers to frostbite crossing irregularly into Canada made an impassioned plea to MPs on Thursday to scrap proposed new asylum-seeker rules the Liberals want to turn into law.

Seidu Mohammed's story of crossing a snow-covered field between North Dakota and Manitoba focused attention on the border in December 2016 — a reason he was asked to testify before the House of Commons finance committee as it studied the proposal in the Liberals' budget bill.

He avoided official border checkpoints in order to make a refugee claim in Canada after being denied in the United States.

The Liberals want to change refugee laws to prevent asylum-seekers from making claims in Canada if they have made claims in certain countries, including the United States — a move Border Security Minister Bill Blair says is meant to prevent "asylum-shopping."

Mohammed said the rules would likely have barred his ultimately successful application if they had been in place two-and-a-half years ago. He told the committee he likely would been sent back to the United States where he would have been locked up and possibly sent back his home country.

"Deporting me back to Ghana would destroy my life. I would be imprisoned or tortured to death," he told the committee. "I don't want this to happen to anybody."

The Liberals' budget bill, as worded, would put more people at risk and shouldn't be passed, he said.

"I'm pleading with you guys … this bill should not be passed."

The new rules introduced last month in the government's omnibus budget bill have become a political lightening rod for the Liberals as they face pressure from the Conservatives to better manage the border, calls from New Democrats to drop the asylum-seeker changes and charges from lawyers and advocates who decry the rules as a devastating attack on refugee rights in Canada.

As multiple House of Commons committee hold hearings on the proposed rules, the government is also facing politically-charged requests from the country's most populous province for more federal money.

Many of the more than 42,000 asylum-seekers have crossed into Canada "irregularly" through unofficial paths along the Canada-U.S. border since early 2017 have found their way to Toronto, Ottawa and other parts of Ontario to await the outcomes of their refugee claims, which could take up to two years due to a growing backlog of cases.

To handle the costs of housing and services for those claimants, the federal government has given Toronto alone $71 million, with a further $7 million to Ottawa's municipal government. Lisa MacLeod, Ontario's minister responsible for immigration, renewed her demands Thursday for the federal government to pony up $200 million she says the feds owe the province for asylum costs.

MacLeod argued that the federal government has sole jurisdiction over refugee resettlement and should provide the province — not just some cities — with compensation for the millions in costs incurred.

Blair pinned the blame back on the Ontario government, telling reporters the Ford government refuses to negotiate directly with the federal government, which is why his department has instead been going directly to cities like Toronto and Ottawa for funding arrangements.

"Historically when people came to Ontario seeking refuge ... municipalities have stood together and worked together to provide the necessary supports," Blair said.

"Unfortunately the province of Ontario has chosen to abrogate their responsibilities and step out of that role, but the job still needs to be done."