Montreal's tam-tams could be 40 years old, but origin remains contested 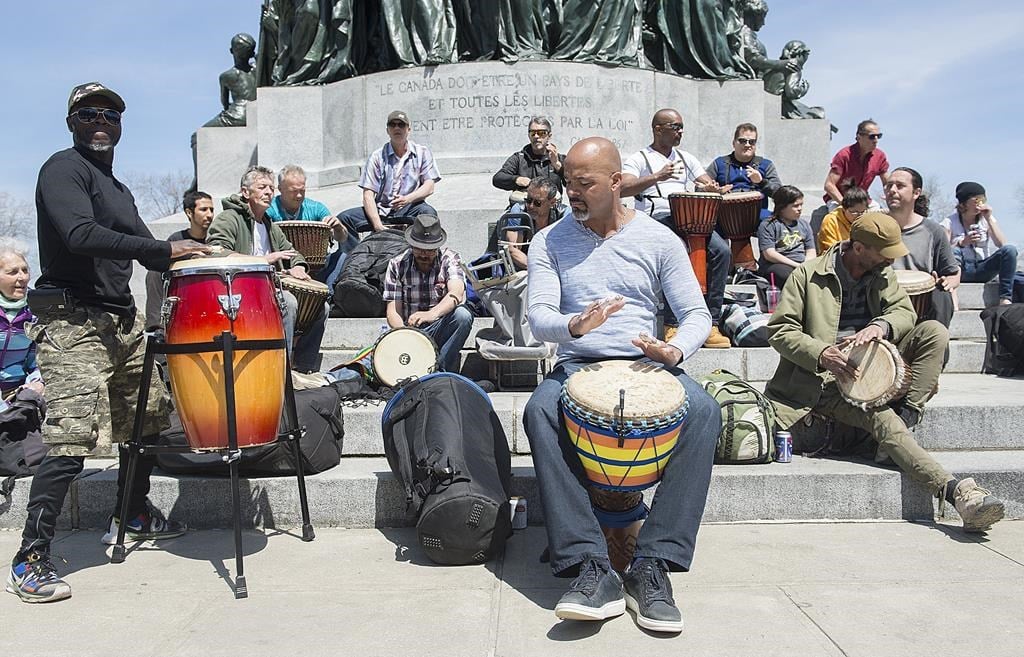 People play drums during the Tam-Tams festival in Montreal, on Sunday, May 12, 2019. Photo by The Canadian Press/Graham Hughes
Previous story
Next story

Every Sunday afternoon from spring through fall, hundreds of people gather on the slopes of Mount Royal for the tam-tams, a loosely organized weekly festival of drumming, dancing, and outdoor picnicking designed to soak up the most of Montreal's short outdoor season.

Named for the drum beats that characterize its soundtrack, the bohemian gathering has become a must-visit for tourists as well as locals, who dance, play or lie on picnic blankets to the sound of dozens of beating drums.

Nobody knows exactly how one of Montreal's signature cultural events got started, according to an ethnologist who has studied the festival and says it could be celebrating its 40th anniversary this year.

But while Monique Provost says there are several theories, she admits it's hard to know where the truth lies.

According to some who have spoken to Provost, the event began in 1979 when Don Hill, a now-deceased street musician, plastered signs around town looking for 100 people who played the djembe, a goblet-shaped West African hand drum, for a drum circle on Mount Royal.

Hill's ensuing "hundred drummers workshop" drew curious crowds and formed the basis of the signature Montreal event, according to Provost, who wrote her doctoral thesis on the history of djembe in Quebec. While Provost credits Hill, she notes that the mountain in the middle of Montreal had already been a site for "intercultural drum exchanges" before he arrived.

"At that time, there were already groups of musicians on Mount Royal," she said in an interview. "People like Don Hill and Michel Seguin — a founding member of the famous Ville Emard Blues Band — went to the mountain to exchange knowledge and to practice.

"But Don Hill had the fantasy of creating big drum gatherings like in the United States. Since he was an American, he wanted to reproduce that here."

Daniel Bellegarde, a professional musician, was among the first percussionists to attend the weekly party. He, too, credits Hill.

"It was Don Hill who was the first one to organize the drum circles on the mountain," he said. "He attracted a lot of people."

Bellegarde said the gatherings were orderly at first but eventually morphed into something "anarchic," creating a split between the professional and amateur musicians.

"Some saw the exercise as a way of letting loose, where you play for yourself and try to hit harder and faster than everyone else — whereas in the American tradition, a drum circle has to have unity," he said.

Despite the anarchy, he says "the playful side is still there, and the tam-tams simply transformed into something else, with both positive and negative sides," he said.

But another musician, David Thiaw, contradicts the origin story presented by Bellegarde and Provost.

Thiaw, who was born in Senegal and now lives in British Columbia's Okanagan Valley, claims he started the event in the 1970s while teaching drum workshops downtown. The percussion teacher said the gatherings originally took place in Notre-Dame-de-Grace, in the city's west end, but eventually moved to the mountain to be closer to where he was living.

"I started to meet with other musicians on Mount Royal on Sundays to practice, because I lived on Parc Avenue," he said in a phone interview. "It was less far for me than NDG."

Thiaw said he started putting up posters to recruit more musicians to meet on the mountain, "long before" Hill did.

"Don Hill wasn't a teacher, he didn't have the discipline," Thiaw said. "He was more of a crowd entertainer."

Yet another story emerges from Michel Seguin, who played with Thiaw and contests the Senegalese musician's claim.

"David Thiaw didn't invent the Mount Royal tam-tams, it was I who was the senior member of the group," Seguin said in a phone interview from California.

The 79-year-old says he travelled to Africa in the mid-1970s, where he learned from the "great masters" of percussion. When he returned, he began organizing playing sessions with groups of musicians, including Thiaw, he said.

"Me, I stayed in the woods of Mount Royal but him, sometimes he moved to play by the statue (the current location), because it was a way to check out the girls passing by," Seguin said.

Provost acknowledges Seguin is considered by his peers to be the first Quebec djembe player, while his brother, Paul, was the first to build the drums in the province.

But she said it's hard to nail down exactly which of the three musicians — who were all "poles of attraction" in their own right — started the tam-tams.

"Moreover, it seems that each person I talk to has lived their own story of the birth of the tam-tams, and it would be a mistake to consider one version to the detriment of another, since they may very well have historically taken place synchronously," she said.

Regardless of who started the event, Provost notes the political context of the era also contributed to its establishment on Mount Royal.

In the early 1980s, raucous parties and complaints from citizens led then-mayor Jean Drapeau to pass an anti-noise bylaw that effectively prevented musicians like Hill, Seguin and Thiaw from playing in public anywhere else.

That led them to make their way to the mountain, where they and their successors have been drumming away ever since.

Trudeau celebrates St-Jean-Baptiste day in Montreal with his family