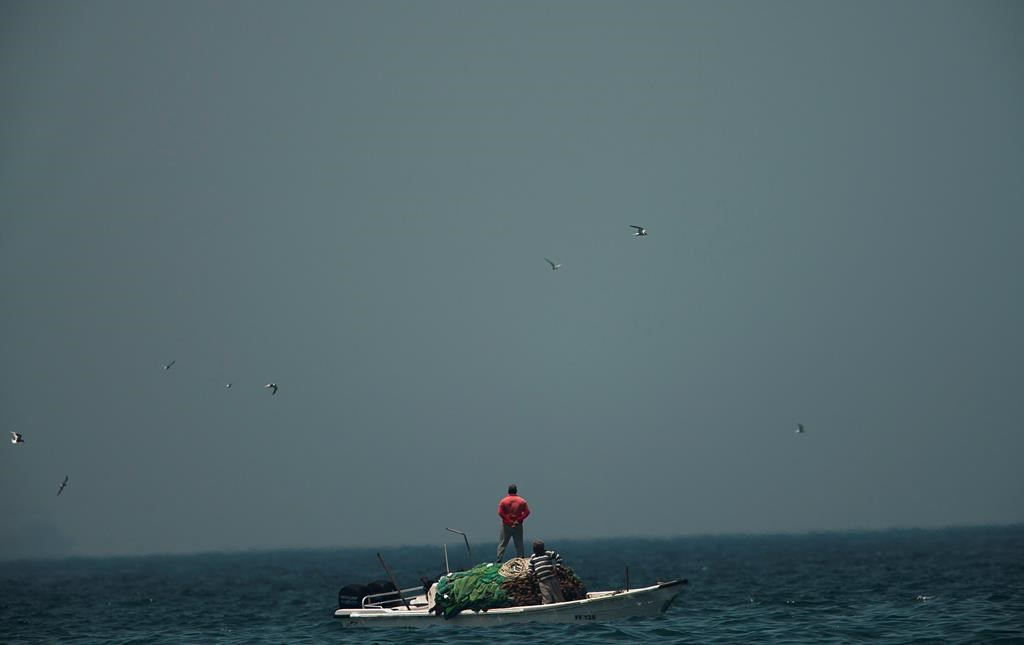 A fishing boat sails in waters off the coast of Fujairah, United Arab Emirates, on Monday, May 13, 2019. Photo by The Associated Press/Jon Gambrell
Previous story
Next story

Saudi Arabia said Monday two of its oil tankers were targeted in "sabotage operations" off the coast of the United Arab Emirates in attacks the previous day that caused "significant damage" to the vessels, one of them as it was en route to pick up Saudi oil to take to the United States.

The announcement by the kingdom's energy minister, Khalid al-Falih, came as the U.S. issued a new warning to sailors and the UAE's regional allies condemned Sunday's incident that targeted at least four ships, including two Saudi tankers, off the port city of Fujairah.

Although details of the attacks were not disclosed, targeting tankers and commercial shipping vessels so close to the Persian Gulf has the potential to rattle global oil supplies.

The Saudi statement came just hours after Iranian and Lebanese media outlets aired false reports of explosions at Fujairah's port. Emirati officials have declined to elaborate on the nature of the sabotage or say who might have been responsible.

The U.S. has warned ships that "Iran or its proxies" could be targeting maritime traffic in the region. America is deploying an aircraft carrier and B-52 bombers to the Persian Gulf to counter alleged threats from Tehran.

Shortly after the Saudi announcement, Iran's Foreign Ministry called for further clarification about what exactly happened with the vessels. The ministry' spokesman, Abbas Mousavi, was quoted by the official IRNA news agency as saying there should be more information about the incident.

Mousavi also warned against any "conspiracy orchestrated by ill-wishers" and "adventurism by foreigners" to undermine the maritime region's stability and security.

Authorities in Fujairah, one of the UAE's seven emirates, declined to speak to The Associated Press on Monday. Officials stopped AP journalists from travelling by boat to see the ships.

Sky News Arabia, a satellite channel partly owned by a member of the Abu Dhabi ruling family, aired footage of a tanker identified as the Al Marzoqah that it said had been targeted. The broadcast only showed one side of the ship, which bore no signs of damage, describing it as the closest one to shore in Fujairah.

Tensions have risen since President Donald Trump withdrew America from the 2015 nuclear deal between Iran and world powers, and restored U.S. sanctions that have pushed Iran's economy into crisis. Last week, Iran warned it would begin enriching uranium at higher levels in 60 days if world powers failed to negotiate new terms for the deal.

European Union powers were meeting Monday in Brussels to thrash out ways to keep the Iran nuclear deal afloat, and were likely to hold talks with U.S. Secretary of State Mike Pompeo amid rising tensions between Washington and Tehran. Saud Arabia is Iran's regional rival.

The statement by al-Falih, the Saudi energy minister, said the attacks on the two Saudi tankers happened at 6 a.m. Sunday. He did not identify the vessels involved, say who was suspected of carrying out the alleged sabotage or give any details about the other vessels reported attacked.

"One of the two vessels was on its way to be loaded with Saudi crude oil from the port of Ras Tanura, to be delivered to Saudi Aramco's customers in the United States," al-Falih said. "Fortunately, the attack didn't lead to any casualties or oil spill; however, it caused significant damage to the structures of the two vessels."

The kingdom's Foreign Ministry on Monday condemned the incident as a "criminal act" threatening the "safety of maritime traffic, which reflects negatively on regional and international peace and security," according to the state-run Saudi Press Agency.

Al-Falih also said the attack aimed to undermine the "security of oil supplies to consumers all over the world" and emphasized the "joint responsibility of the international community to protect" the safety of maritime navigation and oil tankers.

Underling the regional risk, the general-secretary of the six-nation Gulf Cooperation Council described the incident as a "serious escalation."

"Such irresponsible acts will increase tension and conflicts in the region and expose its peoples to great danger," Abdullatif bin Rashid al-Zayani said. Bahrain, Egypt and Yemen's internationally recognized government similarly condemned the alleged sabotage, as did the Arab League.

The UAE's Foreign Ministry on Sunday put the ships near the country's territorial waters in the Gulf of Oman, east of the port of Fujairah. It also said there were "no injuries or fatalities on board the vessels" and "no spillage of harmful chemicals or fuel."

The U.S. Navy's 5th Fleet, which oversees the region, did not immediately offer comment.

Lebanon's pro-Iran satellite channel Al-Mayadeen, quoting "Gulf sources," on Sunday falsely reported that a series of explosions had struck Fujairah's port. State and semi-official media in Iran picked up the report from Al-Mayadeen, which later published the names of vessels it claimed were involved.

The AP, after speaking to Emirati officials and local witnesses, found the report about explosions at the port to be unsubstantiated.

Fujairah's port is about 140 kilometres (85 miles) south of the Strait of Hormuz, the narrow mouth of the Persian Gulf through which a third of all oil at sea is traded. The facility handles oil for bunkering and shipping, as well as general and bulk cargo. It is seen as strategically located, serving shipping routes in the Persian Gulf, the Indian subcontinent and Africa.

"Since early May, there is an increased possibility that Iran and/or its regional proxies could take action against U.S. and partner interests, including oil production infrastructure, after recently threatening to close the Strait of Hormuz," the warning read. "Iran or its proxies could respond by targeting commercial vessels, including oil tankers, or U.S. military vessels in the Red Sea, Bab-el-Mandeb Strait or the Persian Gulf."

The agency on Sunday issued a new warning to sailors about the alleged sabotage and urged shippers to exercise caution in the area for the next week. Publicly available satellite images of the area taken Sunday showed no smoke or fire.

It remains unclear if the previous warning from the U.S. Maritime Administration is the same perceived threat that prompted the White House to order the USS Abraham Lincoln aircraft carrier strike group and B-52 bombers to the region on May 4.

US energy secretary urges Iraq to quit dependency on Iran