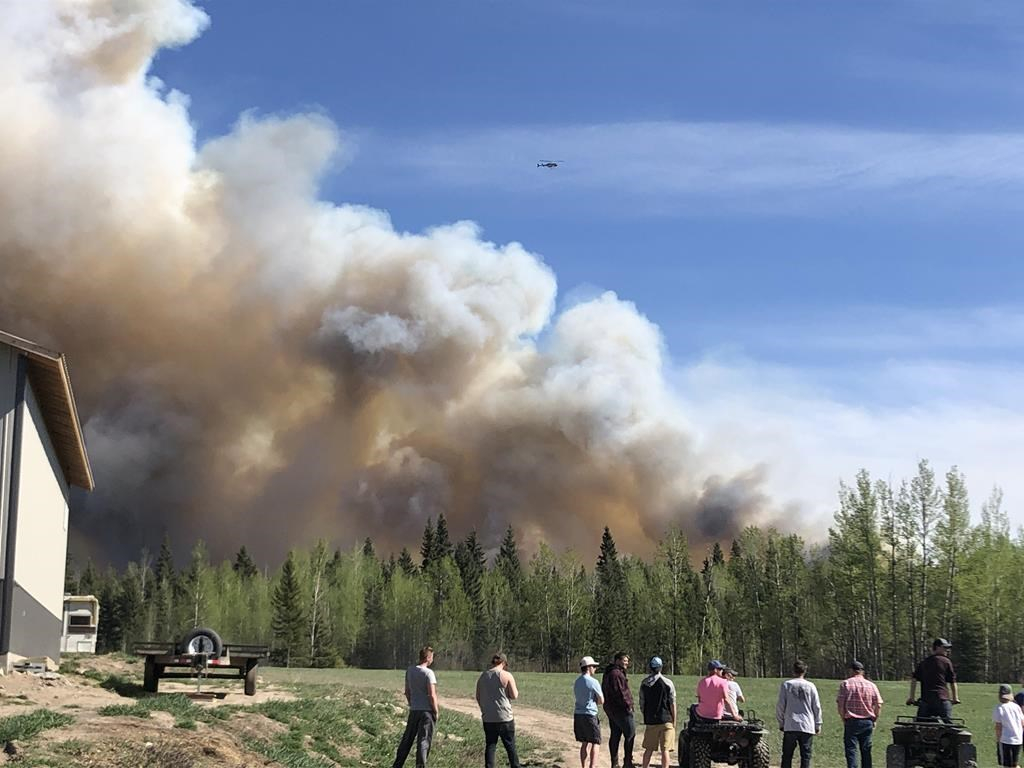 People watch a wildfire burn in Fraser Lake, B.C., on Saturday, May 11, 2019. An active wildfire in central British Columbia has prompted a local state of emergency and several evacuations. Photo by The Canadian Press
Previous story
Next story

Fraser Lake Mayor Sarrah Storey was driving back from a soccer tournament out of town when she saw the skyline transformed by a wildfire creeping up a mountain on the edge of her central British Columbia community.

The blaze grew from four hectares Saturday morning to 260 hectares that night, prompting a local state of emergency and several evacuations for an area about 140 kilometres west of Prince George.

"We drove into pretty much a big huge, smoky billowing cloud and you could see the flames," Storey said in a phone interview Sunday.

The Regional District of Bulkley-Nechako issued a state of emergency Saturday night and ordered people to leave an area near the community of Lejac, about five kilometres east of Fraser Lake.

District chairman Gerry Thiessen said the evacuation area affected only about half a dozen permanent homes, while an evacuation alert means about 40 others nearby have to be ready to leave at a moment's notice. But both the evacuation order and alert were rescinded Sunday night.

As of Sunday afternoon, the BC Wildfire Service said the fire was considered 70 per cent "guarded" but zero per cent contained.

Thirty firefighters, three helicopters and 15 pieces of heavy equipment had knocked the blaze down to 236 hectares.

About half of the province is under "high" fire danger, meaning forest fuels are very dry and the risk of fire is serious. The wildfire service was also battling a six-hectare blaze 25 kilometres from downtown Kamloops with air tankers and helicopters, as well as a nine-hectare fire northwest of Charlie Lake on Sunday.

The wildfire service said in a tweet Sunday afternoon that no structures were threatened by the Kamloops blaze but traffic would be affected.

The cause of the Lejac fire remains under investigation, but Thiessen said that with no recent lightning in the area it appears to have been human-caused.

Thiessen said he first received a call at around 4 p.m. when the fire had scorched about four hectares, and it grew to 65 times that size by the evening.

"We had pretty significant winds yesterday and that was a big concern," Thiessen said in a phone interview Sunday.

After returning to Fraser Lake, Storrey said she visited a home two minutes out of town on Saturday night to bring water and supplies to fire crews. The water bombers and helicopters had been grounded after nightfall but crews were piping water from a small lake to fight the blaze on the ground.

"There were tiny little fires everywhere, the ground was pretty charred and the trees were gone," she said, adding that flames were still "shooting up" and cresting another hill above.

"It's hard to watch," she said. "You're just hoping the crews on the frontline are staying safe and the wind dies down."

The fire has been concentrated on a mountain above Lejac, which is the site of a former residential school and a destination for hundreds of Catholics who make annual pilgrimmages to the grave of Rose Prince, a former student credited with miracles.

By Sunday afternoon, it had not touched Lejac or crossed a highway toward the Fraser Lake sawmill, which is the village's major employer. With winds dying down, crews were optimistic about containing the blaze, Storey said.

But wildfires are no longer a surprise for residents of the region, which was sandwiched between major fires during British Columbia's record-breaking fire seasons in 2018 and 2017.

"We're just really lucky both years that we haven't lost structures or lives or anything major."

Thiessen said he's concerned the season seems to be getting longer. Growing up in the region, he said wildfires typically only occurred in July and August.

And this year, he said the region is vulnerable. A dry winter and spring means there's low snowpack and he said debris piles burned by farmers and loggers in the fall could provide fuel for future fires.

He encouraged back country users to be vigilant.

"We haven't had any significant snow or rain since almost Christmas so that's a real concern for us," he said.

"This is very unusual and it's concerning and I just hope people are careful as we go through this summer."

— By Amy Smart in Vancouver with a file from Adam Burns in Toronto.