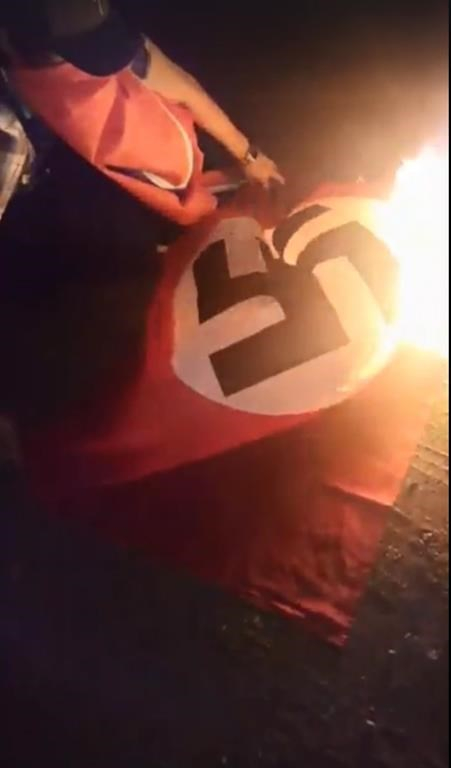 A person holds down a Nazi Party flag as it's set on fire in a still image taken from a video posted to social media on May 10, 2019. Handout photo taken from Facebook/Caleb Beaudin
Previous story
Next story

RCMP in Saskatchewan are investigating a video on social media that they say shows someone burning a Nazi flag which a man claimed to have removed from a rural home.

The video posted on Facebook on Saturday shows a man, his face covered by what appears to be a Confederate flag, spreading a Nazi flag on the ground while a person out of the frame sets it on fire.

Photos of a home in Kelliher, Sask., were shared on social media late last week showing Nazi and Confederate flags flying from an antenna on a roof.

Kelliher mayor Darcy King said Friday that the parents of the man who raised the flags had promised they would be taken down.

King said over the weekend that the flags were no longer up, but he didn't know if they had been removed by the owner or stolen.

The person who posted the video did not respond to interview requests by The Canadian Press.

"Stop racism," the man says in the video. "It has to end now and not later.

RCMP said in a release Monday that they would be meeting with the occupant of the home as part of an investigation into the video.

Cpl. Rob King said last week that police had received complaints about the Nazi flag. And that while displaying the flag wasn't illegal, officers had spoken to the man in the home about it.

Burning things they didn't approve of, like books was a favourite Nazi tactic. Using it against the bigots who espouse Nazi/Slaveholder sentiments probably only reinforces their sense of superiority and ability to inspire fear. Better those flags should wind up where they truly belong, rotting in a cesspit.

Since the Mounties did

Since the Mounties did nothing to the guy after getting complaints that he was flying a Nazi and Confederate flag, then I get this youth's frustration. The whole country should be disgusted. RCMP just do what they're told. Arrest another indigenous youth for nothing...okay...Don't investigate Jason Kenney....okay (not related to this story).

I'm not sure I understand

I'm not sure I understand what needs investigating here. Someone burned a Nazi flag, now there's one less Nazi flag around, and this is a problem because?