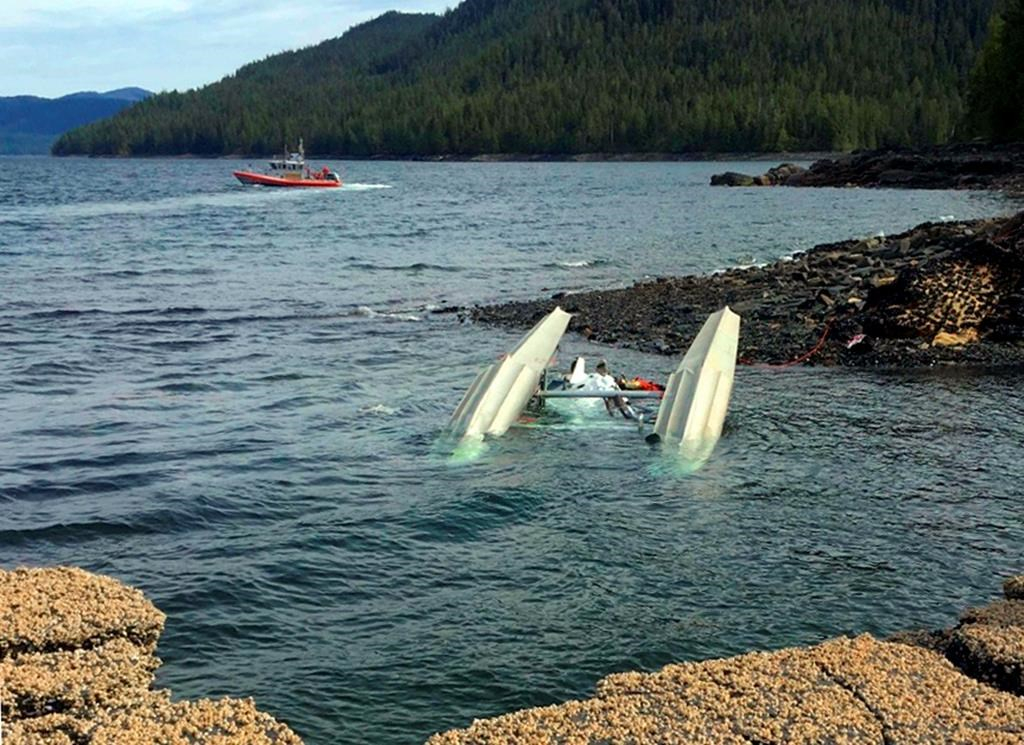 This May 13, 2019 photo provided by Ryan Sinkey, shows a Coast Guard Station Ketchikan response boat crew searching for survivors from a downed floatplane in the vicinity of George Inlet near Ketchikan, Alaska. Photo by Ryan Sinkey via AP
Previous story

A 37-year-old woman from Richmond, B.C., has been identified as the Canadian killed when two sightseeing floatplanes crashed midair in Alaska earlier this week.

Elsa Wilk is one of the six deceased victims named by Alaska State Troopers late Tuesday.

The floatplanes were carrying cruise ship tourists when they collided Monday near the southeast Alaska town of Ketchikan.

The death toll was initially reported as four, with two people missing. The U.S. Coast Guard said the bodies of the two missing people were recovered near the crash site Tuesday night.

"Our thoughts and sympathies are with the family and loved ones of the Canadian citizen who died in Alaska," the department said.

The Royal Princess cruise ship left Vancouver for Anchorage on Saturday and was to return on May 25.

Coast Guard Commander Michael Kahle said earlier Tuesday that crews were searching both the water and the shore of a remote area called George Inlet for the two missing — the Canadian and Australian.

He said the area is en route to the Misty Fjords National Monument, a popular and active spot for sightseeing flights.

One of the planes was a single-engine de Havilland Otter operated by Taquan Air and was returning from a wilderness tour sold through Princess Cruises of the Misty Fjords, the company said.

It was carrying 10 guests from the Royal Princess and a pilot, who were all Americans, the statement said.

The other plane, a de Havilland DHC-2 Beaver, was operating an independent flight tour carrying a pilot and four guests, of which two were American, one was Canadian and the other was Australian, the company added.

The pilot and nine passengers on the Otter were able to make their way to shore, where they were rescued and taken to hospital, Kahle said.

The survivors were in fair or good condition, said Marty West, a spokeswoman for PeaceHealth Ketchikan Medical Center.

"It's been a long day and the crews have been working really hard to rescue people and recover the deceased," said Deanna Thomas, a spokeswoman for the local government, the Ketchikan Gateway Borough.

Jerry Kiffer of the Ketchikan Volunteer Rescue Squad said several of the passengers had been removed from the beach by the time his crews arrived on Monday.

"Obviously, we had some injuries — broken bones, lacerations, back injuries, but everybody was reasonably calm," he told the news conference Tuesday.

The debris field was about 300 metres wide and 800 metres long, with doors, seats and life-jackets strewn in a way that indicated an aircraft had come apart in the air, Kiffer said.

Taquan Air said the company has suspended operations while the crash is investigated.

"We are devastated ... and our hearts go out to our passengers and their families," it said in a statement.

It's not known how the planes collided. U.S. National Transportation Safety Board investigators arrived from Washington, D.C., Tuesday afternoon.