By Cecilia Keating in News | May 15th 2019
#4 of 72 articles from the Special Report: Democracy and Integrity Project 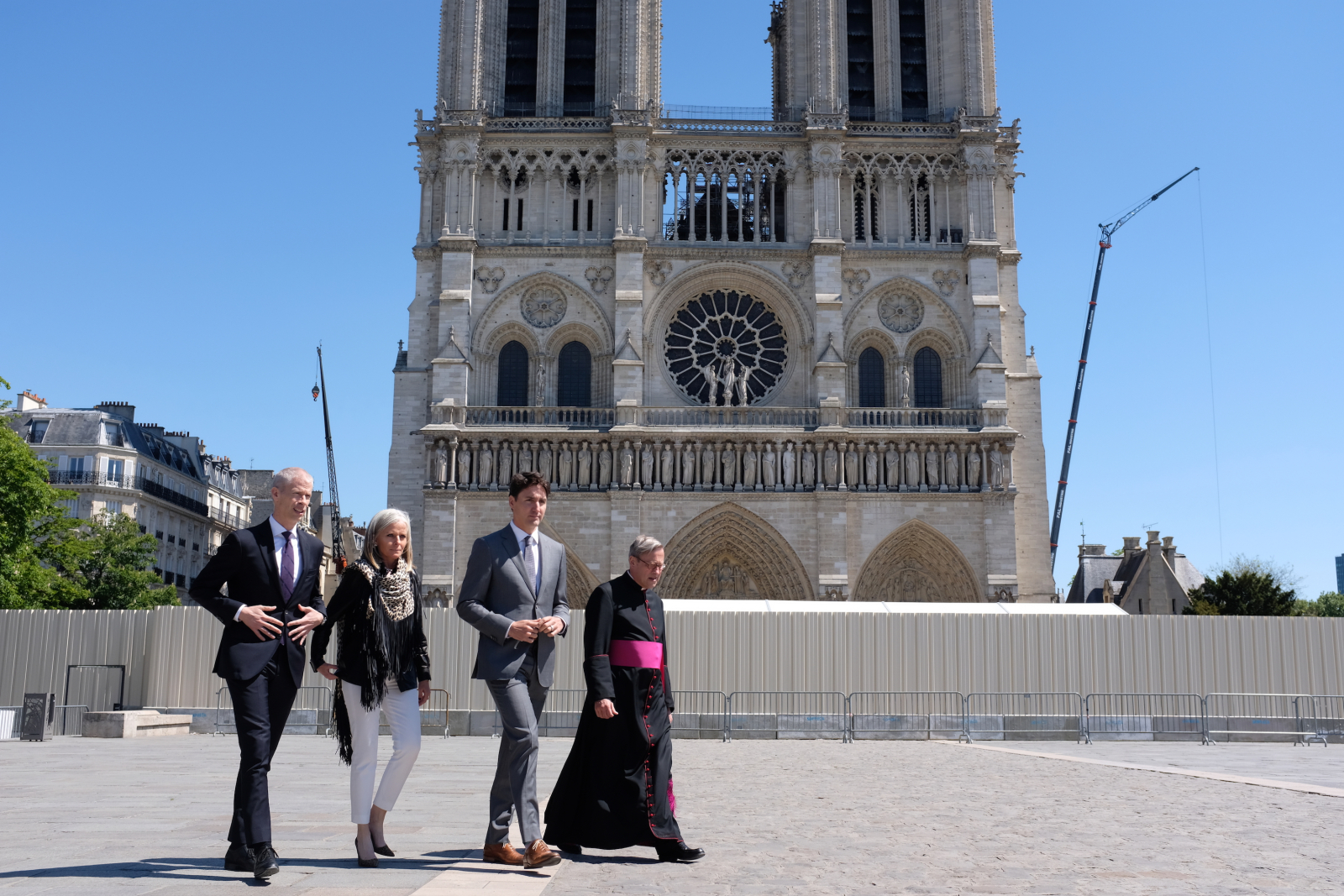 Prime Minister Justin Trudeau touched down in Paris on Wednesday to sign a call to action that aims to clamp down on online extremism in the aftermath of the livestreamed shootings that killed 51 people in New Zealand in March.

Trudeau's first engagement was at Notre Dame Cathedral, where he offered Canadian lumber and steel to help with the cathedral's reconstruction.

They joined other political leaders from Europe, Africa and the Middle East and senior officials from Facebook, Google, Twitter and other technology companies for a joint "call to action" that offers strategies to eliminate online terrorist material.

The non-binding pledge at the heart of the summit has been named the 'Christchurch Call.' It is being spearheaded by Prime Minister Ardern and comes exactly two months after 51 people were murdered at two mosques in New Zealand in a terror attack livestreamed on social media. The video of the attack and the alleged gunman’s hate-filled manifesto were circulated widely online. One and a half million copies of the video were subsequently removed from Facebook.

Prime Minister Ardern wrote that she saw the video herself, in a New York Times op-ed published on May 11 that talked about the need to end terrorist and violent extremist content online.

“Social media connects people. And so, we must ensure that in our attempts to prevent harm that we do not compromise the integral pillar of society that is freedom of expression. That right does not include the freedom to broadcast mass murder,” she wrote.

“And so, New Zealand will present a call to action in the name of Christchurch, asking both nations and private corporations to make changes to prevent the posting of terrorist content online, to ensure its efficient and fast removal and to prevent the use of live-streaming as a tool for broadcasting terrorist attacks. We also hope to see more investment in research into technology that can help address these issues.”

The summit is being held alongside a G7 meeting of digital ministers attended by Minster of Innovation, Science and Economic Development Navdeep Bains. It also coincides with the “Tech for Good” conference being attended by 80 tech companies in Paris.

.@JustinTrudeau says Canada is in solidarity with France and will provide help to rebuild #NotreDame in a short statement in the sun outside the cathedral earlier today @NatObserver pic.twitter.com/sry4B6OBkf

The Prime Minister said that Canada would support France in helping rebuild the 12th century cathedral, which was partially destroyed by fire last month. "This is truly a piece not just of French history, but of world history that needs to be preserved and we will be there to be part of it," he said.

.@JustinTrudeau arrives at Notre Dame in Paris before he heads to Palais d'Elysée to commit to the #ChristchurchCall @NatObserver pic.twitter.com/aLhq5U4AmK

No Zuckerberg or Sandberg

Facebook's two most senior operatives, Mark Zuckerberg and chief operating officer Sheryl Sandberg, are missing the summit, while United States President Donald Trump was another notable absentee. His administration did not reply to multiple emails from National Observer on why he would not attend.

On Tuesday, Facebook tightened its rules on its live video service, banning users for period of time after the first violation of company policy anywhere on the platform. When questioned why these users wouldn’t be banned from Facebook altogether, a spokesperson from the company told National Observer that accounts that break community standards were already liable to account restrictions of a varying scale.

The move comes on the heels of Facebook’s ban of white nationalism and white separatism. The company said March 27 it was adding those to an internal blacklist it calls “Dangerous Individuals and Organizations."

Given the Christchurch Call's recommendations are non-binding, it is unclear at this stage how faithfully governmental and private signatories will follow them.

Some countries have introduced online hate legislation this year already.

In Australia, websites and social medias that fail to remove violent videos are now liable for fines of up to A$10.5 million or 10 per cent of annual profit.

In Germany, a law that came into effect on January 1 makes online companies liable for fines of up to €50 million for failing to remove digital hate speech within 24 hours.

In the UK, the government published a white paper last month which proposes a new regulator that would be responsible for setting and enforcing rules prohibiting speech that is illegal or social damaging.

By Cecilia Keating in News, Politics | May 16th 2019
Democracy and Integrity Project

By Carl Meyer in News, Politics | May 14th 2019
Democracy and Integrity Project