Replacing Phoenix pay system cheaper than fixing its mess will be, PBO reports 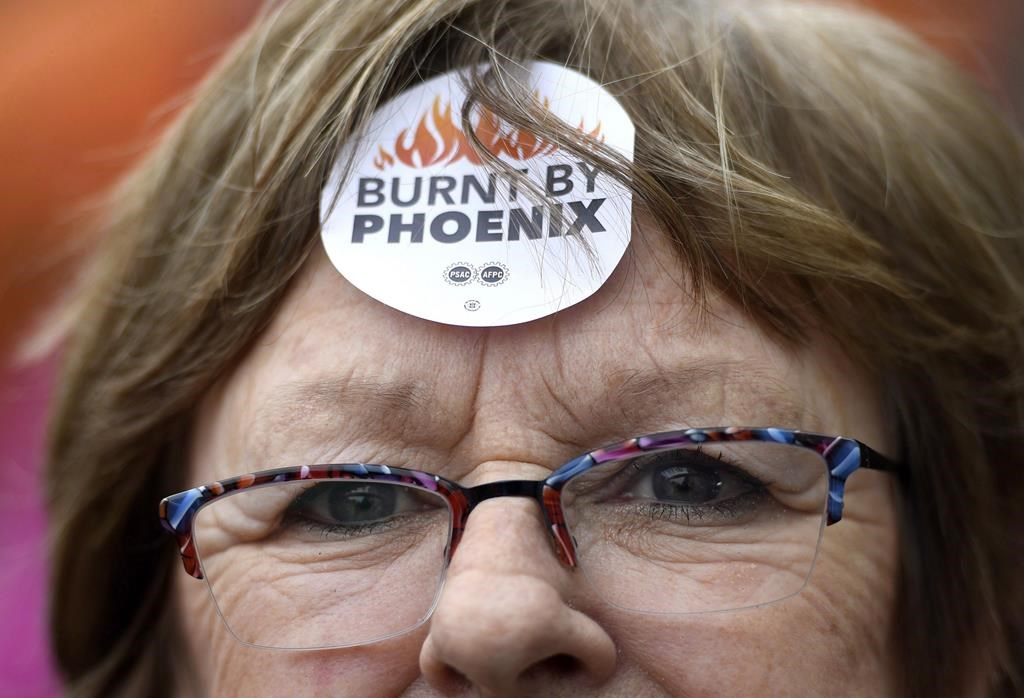 Shirley Taylor wears a "Burnt by Phoenix" sticker on her forehead during a rally against the Phoenix payroll system outside the offices of the Treasury Board of Canada in Ottawa on Februarty 28, 2018. File photo by The Canadian Press/Justin Tang
Previous story
Next story

The cost of building and putting in place a new pay system for federal civil servants should pale in comparison to the cost of stabilizing the failed Phoenix system, says a new report from Parliament's spending watchdog.

Cleaning up the mess Phoenix has made will cost $2.6 billion, the Parliamentary Budget Office told the House of Commons Thursday. Replacing it? A comparatively modest $57 million.

Much, however, depends on the complexity of the new system and any add-ons the government orders to take into account anything beyond the tens of thousands of rules currently used in calculating pay for federal employees, the PBO said.

"Pay-system software must be able to apply all relevant pay rules to calculate the pay of each employee," the PBO said in a summary of its report. "The greater number of rules, the greater the difficulty in configuring or customizing a pay system."

The $57-million price would be spread over six years and includes the cost to buy a new pay system, thoroughly test it and then train people to use it.

Though the new system will need proper data, extracted from a stabilized Phoenix, which is where the big anticipated expenses are.

Included in the PBO's estimate for replacing Phoenix are costs for procurement, testing and training — considered one-time expenditures.

There are also ongoing costs, such as software subscription fees, labour costs and operating the government's pay centre, currently located in Miramichi, N.B. The PBO predicts it will cost between $101.9 million and $105.7 million annually to operate a new pay system, beginning in 2024, which it says should result in significant savings compared with what the government has spent on pay systems previously.

The PBO did not, however, incorporate what could turn out to be sizable expenses, including customization of the new pay system and the cost of transferring pay data from Phoenix to a new system and the likelihood of temporarily running two systems at the same time.

There could be other added expenses as well, such as the cost of in-house compensation advisers, which departments might choose to retain, and the settlement of lawsuits or complaints launched as a result of the Phoenix problems.

In 2018 the Trudeau government earmarked $16 million over two years to begin searching out a replacement for Phoenix. But there was no new money set aside in the latest budget for a new system.

Phoenix has caused massive headaches for federal employees since it was launched in 2016 involving underpayments, overpayments and in many cases no pay at all.

The latest figures from the Public Service Pay Centre dashboard indicate the Phoenix pay system continues to generate pay problems. As of April 17, the pay centre was still dealing with a backlog of 245,000 pay transactions beyond what the government considers normal workload.

According to Public Services and Procurement Canada, the department that manages pay for over 300,000 federal workers, there were about 80,000 rules governing how civil servants are paid in 2006-07.

Neither the department or the Treasury Board Secretariat could provide an estimate of the current number of pay rules, said the PBO.

"Not a surprise given the focus on trying to stabilize the current system," said an official who briefed reporters on the report.

"We haven't seen a big push toward simplification of the pay rules."

The PBO report represents a stark acknowledgment that replacing Phoenix will take years.

Unions representing federal employees have warned that the pay system failures, and the slowness of finding a replacement, will be an issue that dogs the federal Liberals as they campaign toward election day in October.