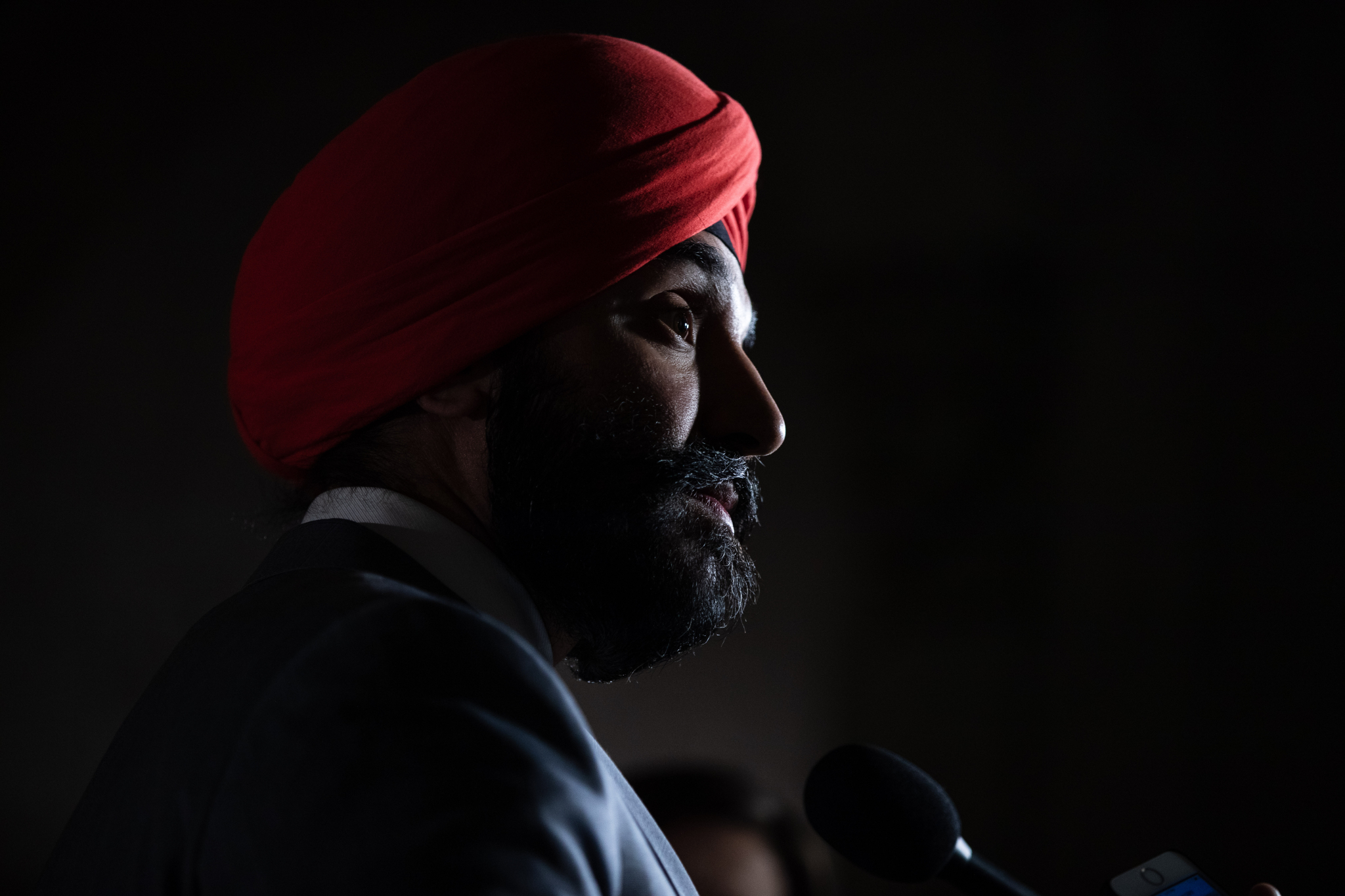 Navdeep Bains, Minister of Innovation, Science and Economic Development, speaks to the media after quetion period in the foyer of the House of Commons, in Parliament, in Ottawa on November 27th, 2018. Photo by Alex Tétreault
Previous story
Next story

The Canadian government is proposing reforms to Canada's competition and privacy legislation as part of a suite of measures to rebuild "a foundation of trust" between Canadians and the digital world, Innovation Minister Navdeep Bains pledged on Tuesday.

Bains delivered this message as he laid out 10 principles of a new Digital Charter in a speech to a Toronto business crowd gathered at the Empire Club of Canada.

These principles include ensuring universal access to internet for all Canadians; enforcing safe and secure access, allowing personal control and consent over data; and, committing "to using data and digital for good," which includes defending freedom of speech while limiting hate speech.

"There will be clear, meaningful penalties for violations of the laws and regulations that support these principles," Bains told the crowd, made up of Toronto's industry leaders, lobbyists and business executives. Bains told reporters after his Empire Club speech that it would be "a significant fine" for data breached and a failure for companies to disclose the breach to the individual and privacy commissioner.

"Clearly, if a company does not follow our privacy laws, there are going to be significant and meaningful fines," he said to reporters.

The minister, however, didn't specify specific details of proposed changes to laws and regulations and how stiff these penalties may be. (This year, France imposed a 50 million Euros fine on Google, for example.)

With only four weeks left in Parliament's calendar before it rises for the summer, and only five months left before the next election, it's not clear whether these ten principles can be turned into legislation before Canadians head to the polls. When asked why the government was proposing principles, without detailing legislative changes, Bains said Canada “is already in a strong position with our privacy laws,” and the Digital Charter will “further enhance those laws by putting some strong mechanisms for consent, control, transparency, enforcement.”

Data is like the new electricity: it opens up a whole new world of possibilities, and its own set of challenges. Tomorrow I'll be at the @Empire_Club in Toronto to share the details of our #DigitalCharter. It lays a foundation of trust for managing data in the 21st century.

Moving forward, the government will be reviewing the Statistics Act "to ensure Canadians can trust the way their data is handled," Bains said. Last year, Statistics Canada came under fire after Global News reported the agency was seeking to obtain the personal banking information of 500,000 Canadian households, which included everything from credit card payments to account balances

When asked how the #DigitalCharter would police issues of data breaches and hate speech in a boundary-less digital environment, @NavdeepSBains said he recognizes Canada "can't go in alone. We need to work with our allies and friends."

The innovation minister said he had also written a letter to the head of the Competition Bureau ensure he has the tools necessary "to promote competition and create a healthy environment."

"The government will ensure fair competition in the online marketplace," Bains told the Empire Club lunch meeting Tuesday. "We want to facilitate the growth of Canadian businesses and affirm Canada's leadership on digital and data innovation, while protecting Canadian consumers from market abuses."

The government is pledging to strengthen the Personal Information Protection and Electronic Documents Act (PIPEDA), the privacy law that governs private sector corporations, in line with the Digital Charter. This Act has not been updated since the early 2000s and is out of date with the new digital world and global privacy laws, a senior official at the Innovation, Science and Economic Development Ministry said.

The government is also launching the Data Governance Standardization Collaborative — a body that will coordinate the development of data governance standards in Canada. This will help create a level playing field in the digital economy, Bains said.

"Innovation cannot happen at the expense of privacy, and data and personal security," he said.

Digital Charter 'lays out the rules of this new game': Bains

Details of the Digital Charter come almost a week after world leaders and social media companies gathered in Paris to sign the "Christchurch Call," pledging to step up efforts to prevent their platforms from being used to spread hatred, help extremist groups organize and broadcast attacks.

At that conference, Prime Minister Justin Trudeau announced that Canada would create the Digital Charter, likening the current digital landscape to the "Wild West," and emphasizing the need to combat hate speech, misinformation and online electoral interference.

"I believe that when 51 people are murdered, and the whole world can watch it happen in real time, that’s exactly the time to talk policy," Trudeau had said in Paris.

The March 15 attack on two mosques in Christchurch, New Zealand, which killed 51 people, and how it was live-streamed and reposted on several social media platforms, was a top of mind again on Tuesday.

"How can Canadians believe in the good of this online world when they’re confronted with a video of 51 innocent people gunned down during prayer in Christchurch? And that video goes viral," Bains asked the Toronto crowd."How can they trust their data will be used to improve their lives when it’s used to bombard them with disinformation?"

When asked by National Observer how the new Digital Charter would police issues of data breaches and hate speech in a boundary-less digital environment, Bains said Canada recognizes "We can't go in alone. We need to work with our allies and friends."

Bains said he has made efforts to work with G7 countries to figure out areas of collaboration within the Digital Charter, and is working with the OECD and the World Economic Forum (which has positively endorsed the new charter). "We're taking a multilateral approach, working with other jurisdictions because we preconize this problem goes beyond our borders," he said.

The Digital Charter has come about after "extensive consultations" with Canadians, business leaders, academic experts and members of the federal government, Bains said. It reflects "a government-wide approach," he added, with several federal ministries working together and coordinating efforts to ensure that Canada's laws are reflective of the 21st century digital economy.

According to government numbers, 90 per cent of Canadians "would turn off the tap to a business that misuses their data, Bains cited in his remarks.

The new Charter "lays out the rules of this new game," Bains said, one which changes faster than governments have been able to react.

"With the Digital Charter, we now have the values that will guide us," he said.

Editor's note: This article was updated a 3:15 p.m. EST to include additional background and comments from Navdeep Bains