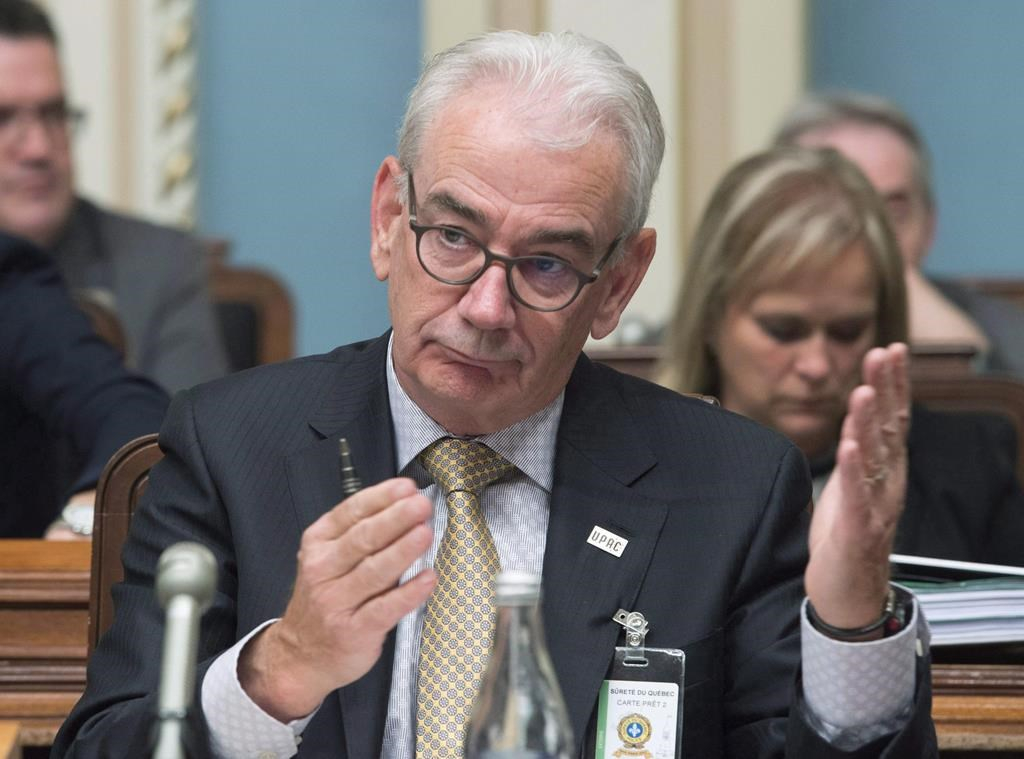 UPAC commissioner Robert Lafreniere appears at a legislature committee on public security at the legislature in Quebec City on April 24, 2018. File photo by The Canadian Press/Jacques Boissinot
Previous story
Next story

Fresh allegations involving Quebec's anti-corruption unit, once held up as the police force that would rekindle citizens' trust in their institutions, are roiling the province's political class.

The anti-corruption squad, known as UPAC, has been suffering from low morale, recruiting difficulties and a series of embarrassing leaks to the media.

The latest leak came Thursday in the Journal de Montreal, which reported the Crown prosecutor's office was in possession of hours of testimony from the unit's former head of operations, Andre Boulanger.

He reportedly told prosecutors under oath in 2018 that certain open investigations could fall apart because officers had fabricated evidence.

Quebec Premier Francois Legault called the report "worrying." But he had little else to say on the topic Thursday.

"We'll let the prosecutors do their job. But it's worrying," he told reporters.

Quebec solidaire co-spokesman Gabriel Nadeau-Dubois gave a big sigh when asked to comment on the allegations.

"There are mornings in politics when we try and find the right qualifiers to describe a situation," he said. "I'm still trying to figure out how to describe it."

UPAC — the Unité permanente anticorruption — was created in 2011 by Jean Charest's Liberal government following blockbuster revelations of corruption in the province's construction industry.

"For many Quebecers, UPAC has become a field of ruins," Nadeau-Dubois said. "UPAC was the institution that was supposed to give us trust in our institutions. And now we've lost trust in them."

On Wednesday, the government adopted a bill that changes how the anti-corruption squad's commissioner is chosen. Instead of being named directly by the premier, the new head of UPAC will need to be confirmed by two-thirds of the legislature.

Robert Lafreniere was UPAC's first and only commissioner. He was named to the job by Charest and confirmed for a second mandate by former premier Philippe Couillard. Lafreniere resigned without explanation last Oct. 1 — Quebec election day.

Christine St-Pierre, official opposition critic for public security, said the latest report on UPAC is "very troubling, very shocking. We are talking about fabricating evidence. We need all the light to be shone on this."

She said Lafreniere should be called to testify at the legislature about his time as UPAC commissioner.

UPAC is far from the only police force in Quebec to be going through turmoil.

In March, provincial police chief Martin Prud’homme was suspended pending the results of an investigation into an allegation he committed criminal offences.

He had just returned to the Surete du Quebec after spending a year as interim chief of the Montreal police, dispatched to set things straight following the suspension of chief Philippe Pichet.

Pichet’s suspension followed reports the force’s internal investigations unit had exaggerated or fabricated evidence against officers and helped created a climate of vengeance and mistrust.

Several Quebec media have reported Prud’homme's suspension was connected to an investigation into leaks to journalists in 2017 about a highly sensitive UPAC probe of the Quebec Liberals and Charest.

The investigation into Prud’homme is being conducted by Quebec’s police watchdog, the Bureau des enquetes independantes. That bureau was also given a mandate in October 2018 by the provincial government to investigate the UPAC leaks.

Jean Pascal Boucher, spokesman for Quebec's prosecutor's office, said the Crown "cannot confirm nor deny" the report in the Journal.