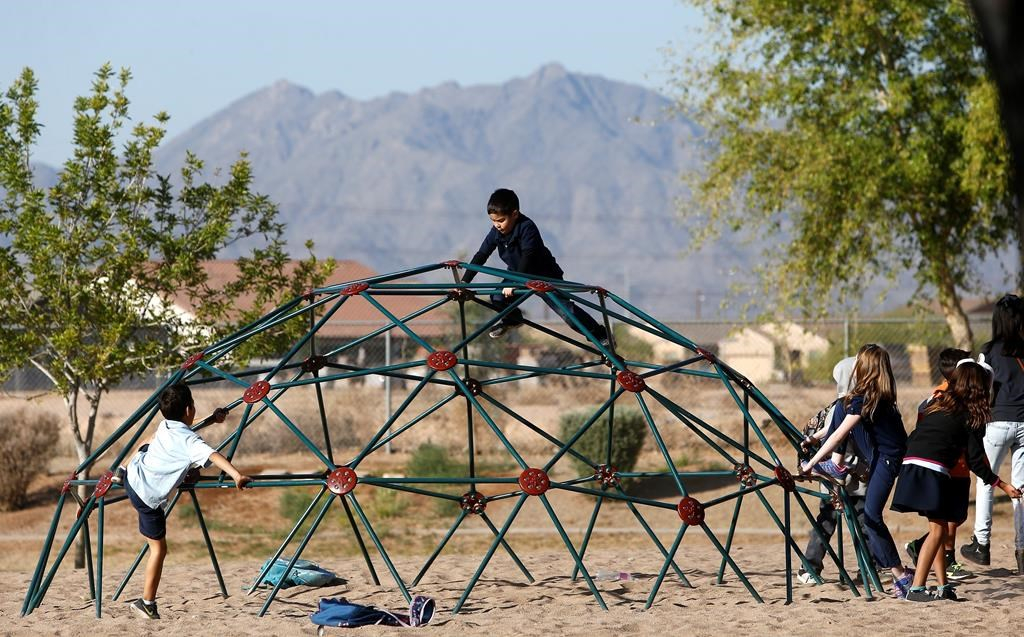 Students play in a school playground in Phoenix, Ariz., on Thursday, May 3, 2018. File photo by The Associated Press/Ross D. Franklin
Previous story
Next story

Boys in poor urban areas around the world are suffering even more than girls from violence, abuse and neglect, groundbreaking international research published on Monday suggests.

The study in the Journal of Adolescent Health, along with similar new research, suggests an adequate focus on helping boys is critical to achieving gender equality in the longer term.

"This is the first global study to investigate how a cluster of traumatic childhood experiences known as ACEs, or adverse childhood experiences, work together to cause specific health issues in early adolescence, with terrible life-long consequences," Dr. Robert Blum, the lead researcher for the global early adolescent study, said in a statement. "While we found young girls often suffer significantly, contrary to common belief, boys reported even greater exposure to violence and neglect, which makes them more likely to be violent in return."

The study from Johns Hopkins Bloomberg School of Public Health looked at childhood traumas suffered by 1,284 adolescents aged 10 to 14 in more than a dozen low-income urban settings around the world such as the United States, China, the U.K., Egypt and Bolivia.

Overall, 46 per cent of young adolescents reported experiencing violence, 38 per cent said they suffered emotional neglect and 29 per cent experienced physical neglect. Boys, however, were more likely to report being victims of physical neglect, sexual abuse and violence.

Separately, a new report to be released next month at an international conference in Vancouver concludes that focusing on boys is critical to achieving gender parity. The report from the Bellagio Working Group on Gender Equality — a global coalition of adolescent health experts — finds boys and men are frequently overlooked in the equality equation.

"We cannot achieve a gender-equitable world by ignoring half of its occupants," the report states. "It is crucial that boys and men be included in efforts to promote gender equality and empowerment."

For the past six years, a consortium of 15 countries led by the Bloomberg School of Public Health and World Health Organization has been working on the global early adolescent study. The aim is to understand how gender norms are formed in early adolescence and how they predispose young people to sexual and other health risks.

Evidence gathered by the study indicates boys experience as much disadvantage as girls but are more likely to smoke, drink and suffer injury and death in the second decade of life than their female counterparts.

The key to achieving gender equality over the next decade or so — as the United Nations aims to do — involves addressing conditions and stereotypes that are harmful to both girls and boys, the researchers say. They also say it's crucial to intervene as early as age 10. The norm is now age 15.

"Gender norms, attitudes and beliefs appear to solidify by age 15 or 16," the working group says. "We must actively engage girls and boys at the onset of adolescence to increase total social inclusion and produce generational change."

Leena Augimeri, a child mental-health expert with the Child Development Institute in Toronto, agreed with the need to focus on boys as well as girls. At the same time, she said, the genders do require different approaches.

"Boys are equally at risk," said Augimeri, who was not involved in the studies. "When we look at the various issues that impact our children, we have to look at it from different perspectives and lenses and you can't think there's a one fit for all."

I agree. I have long felt

I agree. I have long felt that both genders are negatively affected by neglect, sexual abuse and violence during childhood. Also, both males and females are brainwashed from birth and suffer under the social expectations of their gender. Why are there more men in prison than women? And why do more men die a violent death than women, apart from war, in spite of the fact that more women than men are killed by their intimate partner? We are in this together and need to work it out together, while respecting individual needs.

'I Am Nobody,' a story of sex abuse survival and the 'murder of a child's soul'