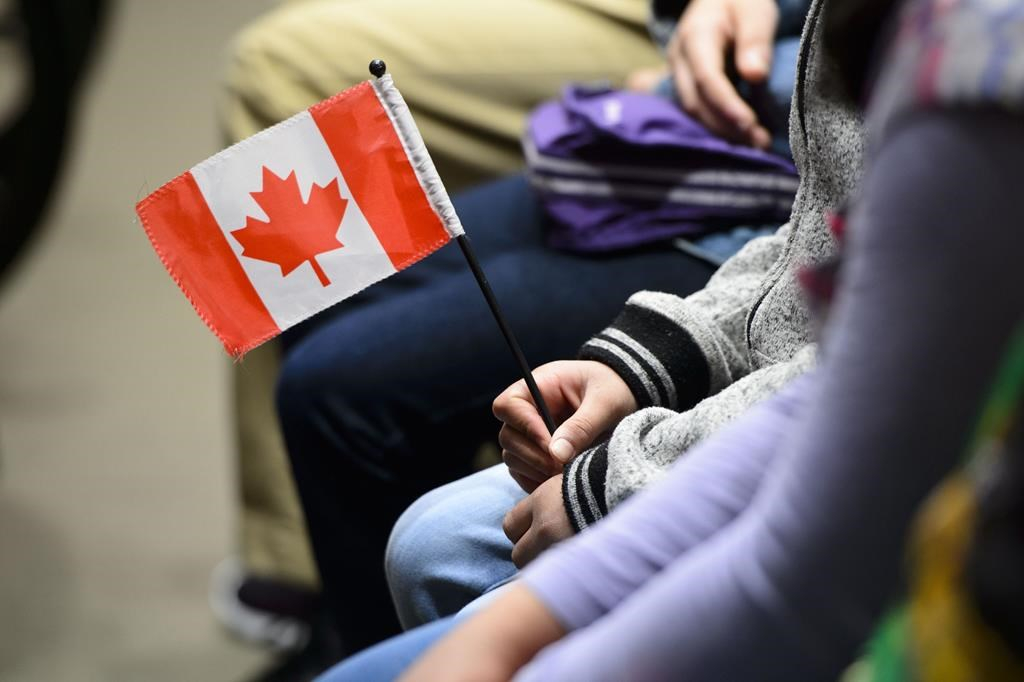 A young new Canadian holds a flag as she takes part in a citizenship ceremony on Parliament Hill in Ottawa on Wednesday, April 17, 2019, to mark the 37th anniversary of the Canadian Charter of Rights and Freedoms. File photo by The Canadian Press
Previous story
Next story

The federal government is taking the relatively rare step of revoking Canadian citizenship from a Chinese man because he allegedly got it through a bogus marriage.

The government is asking the Federal Court of Canada for a declaration that Yan Yang He fraudulently secured citizenship nine years ago.

A statement of claim filed by the citizenship minister accuses He of concealing that he entered into a marriage of convenience with his former spouse, Lisa Marie Mills, in 2004 after coming to Canada as a student. As a result, the statement says, the man was granted permanent-resident status in 2006 by way of spousal sponsorship, opening the door to Canadian citizenship four years later.

Ottawa revoked citizenship from 17 people between April 1, 2017, and May 7 of this year, according to Immigration, Refugees and Citizenship Canada.

The move against He comes amid severely strained relations between Ottawa and Beijing.

China was angered by the arrest late last year of Chinese technology giant Huawei's chief financial officer, Meng Wanzhou, in Vancouver following a request from U.S. authorities. Two Canadians have since been charged in China with trying to steal state secrets, a development widely seen as retaliation the technology executive's arrest.

The Canadian Press's attempts to contact He, last said to be living in Toronto, were unsuccessful.

The federal statement of claim says an investigation by the Canada Border Services Agency identified He as a recipient of the services of Wei Ren, who arranged marriages between Chinese nationals and Canadian citizens for a fee, to help them get permanent-resident status.

In 2011, Mills confirmed to the border agency that she entered into a marriage of convenience with He, the claim says. Mills admitted receiving $2,500 on the wedding day and $2,500 after He obtained a divorce from her two years later.

She acknowledged meeting He on only five occasions and that the pair never lived together — clashing with information He included in his application for permanent-resident status.

The government first took steps to revoke He's Canadian citizenship in December 2016. However, the effort was derailed by a 2017 court decision that said an individual about to lose citizenship must be allowed a fair hearing.

Ottawa subsequently passed legislation that spells out new procedures, including an opportunity for the accused person to make written representations to the government.

The federal claim details the various steps taken by the minister last year to contact He at his last known address about his case and give him a chance to reply.

"The minister is satisfied that Mr. He was previously aware that a revocation proceeding against him had been commenced in 2016 and that all reasonable attempts have been made to notify Mr. He of the minister's renewed intent to revoke his Canadian citizenship," the federal claim says.

"Nevertheless, Mr. He has not made any contact with (the department) to ascertain the status of his citizenship revocation proceedings."

As of Wednesday, He had yet to file his own submission with the court.