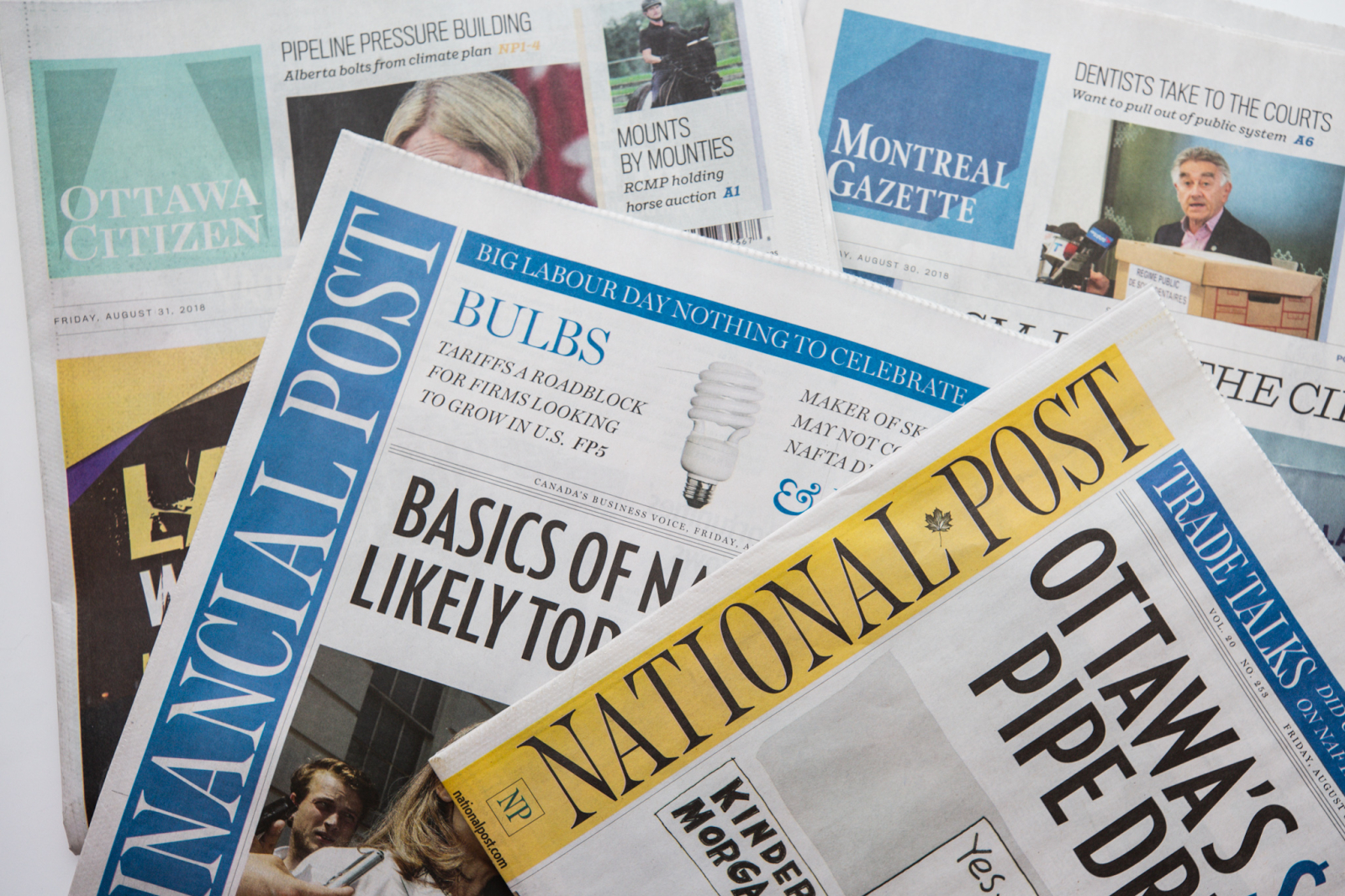 Postmedia, the owner of Canada’s largest chain of newspapers, says its lobbying efforts to get its sales division involved with a provincial “war room” supporting the Alberta oilpatch are consistent with its bid to help itself to Ottawa’s $595 million media support package.

Finance Minister Bill Morneau was urged this week to take a second look at Postmedia's eligibility for federal subsidies for journalism, in light of the company's proposed involvement in the United Conservative Party government's war room — which has been criticized as a hub for oilpatch propaganda.

NDP ethics critic Charlie Angus told Morneau in a letter, shared with National Observer, that Postmedia's potential participation in the war room should disqualify it from government support, since it would make a mockery of independent journalism.

The Trudeau government, however, says its forthcoming "independent panel of experts" will be ultimately responsible for proposing eligibility guidelines — and will be charged with recommending members to a "second panel" which will do the actual vetting of news organizations.

Heritage Minister Pablo Rodriguez took the latest steps toward setting up the first panel on Wednesday, when he named eight associations expected to submit candidates.

That panel is only expected to meet briefly over the summer. Part of its mandate will be to "make recommendations to the ministers regarding the composition of a second panel, which will assess the eligibility of journalistic organizations" to claim tax measures.

'It seems ‘significantly’ is the key word'

When Morneau first unveiled the federal government's support for media organizations in November 2018, Postmedia CEO Paul Godfrey called it a "turning point" and said “everyone in journalism should be doing a victory lap around their building right now."

But the company has faced questions about its eligibility for that federal support ever since it hired Alberta Premier Jason Kenney’s former chief of staff and campaign director to discuss how the company could get “involved” in the premier’s $30-million public relations effort against the “green left."

One of the clauses in Prime Minister Justin Trudeau’s budget implementation bill that puts in place the new support measures says that in order to qualify as an eligible Canadian journalism organization, the company must not be “significantly engaged in the production of content” for a “government, Crown corporation or government agency.”

In his letter to Morneau, Angus called on the minister to ensure the tax measures are not used to prop up “government-led communications efforts on behalf of one industry.”

“If Postmedia is acting as a vehicle for paid propaganda content for a particular government and industry, it would make a mockery of the notion of independent journalism and should not be entitled to taxpayers funding,” reads the letter.

Postmedia has previously said that any involvement in Alberta's war room would be carried out by the company's commercial division that produces advertorials, or sponsored content that resembles editorial content such as news articles. This division is separate from the editorial staff that report or provide commentary on the news.

Phyllise Gelfand, Postmedia’s vice president of communications, told National Observer on Wednesday that the war room bid is “really preliminary and has no project scope.” But she said the company sees sponsored content it produces for clients as a form of advertising, no different than running public information in ads.

“It seems ‘significantly’ is the key word,” said Gelfand in an emailed response to questions about the budget bill clause. “Most, if not all, newspapers have governments as clients — think about local hearing / meeting notices from municipalities, road closures, public health notices, election advertising, tourism etc.”

Newspaper organizations are already working “in the commercial content sphere for government organizations,” she added. While she agreed things like road closures and public health notices would be portrayed as ads, she argued “sponsored content” would be as well.

One is 'public service,' the other is 'paid propaganda'

Angus wondered why the company would need to hire a lobbyist if it was essentially engaging in business as usual.

“It seems an enormous stretch to try and equate the posting of public information about road closures, municipal meetings and tourism events to ‎a media machine creating content in a designated war room on behalf of a government to attack and discredit citizens who take a different policy view,” wrote Angus in an email.

“One is clearly public service, the other work is paid propaganda. Any kind of work of this nature is significant because it is a breach of the clear line that must separate independent journalism from sponsored political and industry content.”

In addition to the “significantly engaged” clause, the MP’s letter also refers to Morneau’s fall economic statement, which said the panel would “define and promote core journalism standards” and “define professional journalism.”

“I put it to you that Postmedia's efforts to get a slice of the Kenney government communications war room would be an abrogation of those core principles,” he told Morneau.

The Trudeau government has previously faced questions surrounding its attempt to help an ailing Canadian media industry, including whether it was tilting its support too far towards newspapers and not enough to other forms of media such as broadcasters and magazines.

'This panel is not what people were expecting'

On Wednesday, Rodriguez was hit with fresh criticism for inviting labour union Unifor to advise the government about the independent panel.

Unifor represents a large contingent of unionized staff across Canada. It openly campaigned against former prime minister Stephen Harper in the 2015 election campaign, and has vowed to fight current Conservative Leader Andrew Scheer in the 2019 campaign.

Unifor Media Sector director Howard Law said in an interview that he suspected the criticism aimed at the government over Unifor was due to a misunderstanding that the panel would do the actual vetting of news organizations' eligibility for tax measures.

"This panel is not what people were expecting — which is kind of a gatekeeper panel, who gets money and who doesn't. That's a second panel, and we're not being asked to nominate to that panel," he said.

"This first panel that they've set up has a very limited and restricted request of it, which is, by the end of July, to meet for four to eight days, and flesh out some of the eligibility definitions for what is news, as opposed to who gets (federal support)."

The nominees made by Unifor and other organizations to the first panel will themselves be able to recommend somebody to the second panel, which will perform more of the gatekeeper function.

"Just so people understand, Unifor doesn't think that we ought to be on that gatekeeper panel. There's probably a long list of people who should not be on that panel," said Law.

Meanwhile, Rodriguez is defending the whole process as ensuring Canadians can continue to access to "accurate, diverse and relevant news."

"In order for that to happen, we have to continue to have an active, professional, reliable and independent press," he said in a statement Wednesday. "We are reaching another milestone toward the implementation of these measures that aim to support Canadian journalism and journalism in underserved communities.”

It's unclear how the government views Postmedia's stance on eligibility. Morneau’s spokesman Pierre-Olivier Herbert directed questions to Canadian Heritage. Departmental spokeswoman Martine Courage declined to comment on whether the budget bill clause would disqualify the company from federal support.

"The department cannot comment on the eligibility of a particular news organization," wrote Courage in an emailed response.

She added that the panel would be able to "consider the views of third parties if it deems this essential, including industry stakeholders such as newspaper publishers, Postmedia being one of them."

"The panel's mandate is to provide recommendations for the implementation of tax measures. Among other things, the expert group will need to look at certain definitions and other eligibility criteria," wrote Courage.

"It is also expected that the expert panel will make recommendations on the composition of a second group that will be responsible for assessing the eligibility of journalistic organizations for tax measures."

The Liberal government wants to position itself as the gatekeeper with this fund no matter what the layers of panels are. There is another way to make a positive change to the industry and it's one that has credible support. Use the tax code the way it should be used. Groups like FRIENDS of Canadian Broadcasting (https://wechoose.ca) and Canadians for Tax Fairness (https://www.taxfairness.ca/en/blog/time-tax-digital-corporations) and The Professional Institute of the Public Service of Canada (https://www.pipsc.ca/news-issues/shell-game) advocate for closing the loopholes that allow advertising revenue to drain out of Canadian media organizations.

I should hope it is

I should hope it is disqualified from government subsidy/support. Really!