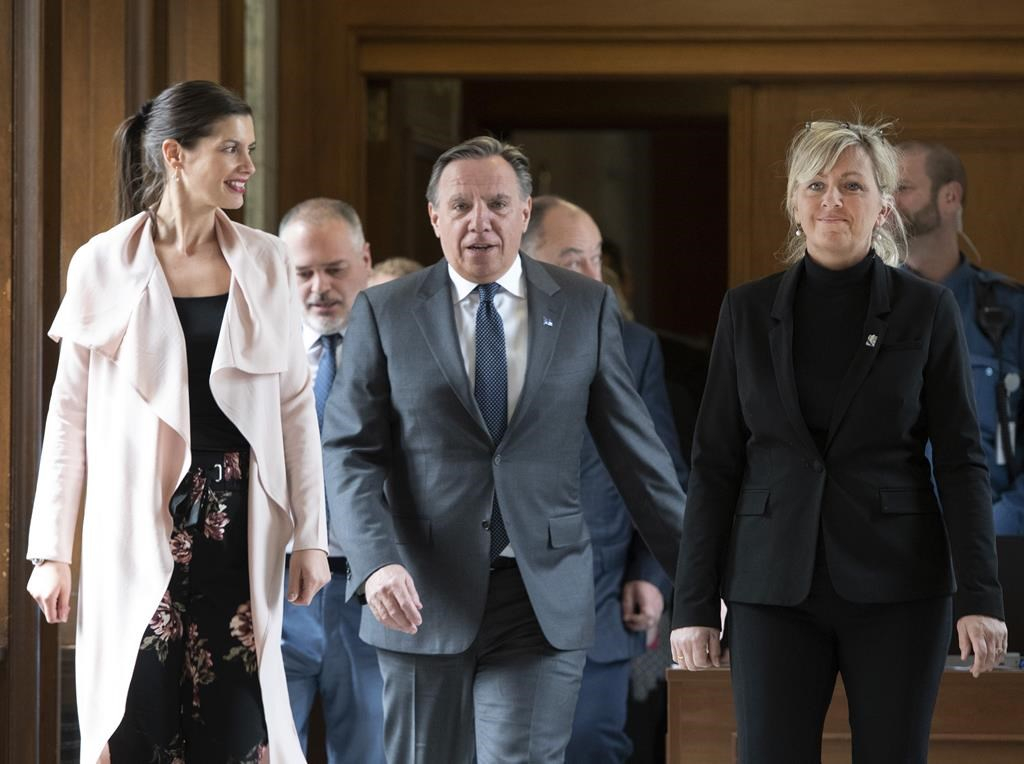 Francois Legault, flanked by Genevieve Guilbault, left, and Andree Laforest walks to a news conference to announces an action plan on floods, on May 1, 2019 at the legislature in Quebec City. File photo by The Canadian Press/Jacques Boissinot
Previous story
Next story

Premier Francois Legault says his government will force the Caisse to purchase trains made in Quebec as part of the extension of Montreal's Reseau Express Metropolitain light-rail system.

"It's certain. Whether in the form of the REM or tramways ... for sure we will require local content," he said Saturday at the Coalition Avenir Quebec's party convention on green issues in Montreal.

The Caisse, Quebec's pension fund operator, has a mandate to operate independently and free of political interference in its decisions.

Legault said Saturday he never understood why the former Liberal government did not require the Caisse to purchase products manufactured in Quebec.

Environment Minister Benoit Charette echoed the statement, telling reporters there will be a local content requirement for the second phase of the REM transit network. He added that any infrastructure project related to public transit will now have Quebec content requirements.

"Quebec grants the contracts. It determines the mandates. So, it has every right to require certain special clauses," he said.

The CAQ government has pledged to extend the REM, which the Caisse owns, by nearly 40 kilometres to Laval and Chambly. Public funds will pay for nearly half of the more than $6-billion project.

The plan for the REM, now under construction, includes a major line that runs from Deux-Montagnes to Monteregie, passing through downtown Montreal, with branches extending to the West Island and toward Trudeau airport.

The Quebec-made trains will be fully compatible with the 212 first-phase cars manufactured at the Alstom plant in southeastern India, Charette said.

"It's not an issue at the technology level," he said.

Economy Minister Pierre Fitzgibbon was more cautious Saturday. He declined to say whether the provincial government will require local content.

"We'll see what will happen with the project, how we'll connect the North Shore and the South Shore. When we have decided what to do, we certainly like to support Quebec, but there are international rules that must be respected," he said.

About 1,200 members of the CAQ convened Saturday for a two-day party convention in Montreal to draw up an environmental road map for the province.

Members are slated to vote on 32 resolutions, such as eliminating single-use plastic, imposing a fee on water bottles and looking for alternatives to road salt.

Opposition parties and environmentalists have accused the CAQ of lacking a green vision.

On Saturday, the party distributed a resolutions program made of recycled paper, installed ostentatious recycling bins around the room and banned glasses and plastic utensils during general council time.

The CAQ said the event was carbon neutral, because trees will be planted to compensate for the participants' commutes.

Theatre director and environmentalist Dominic Champagne, touting an "I love my prime minister" badge, addressed the Caquistes to convince them of the "urgency to act" in the face of climate change. He was warmly received by activists, one of whom declared himself "climate-realistic."

Are seniors being left out of Montreal's bid to make the city more 'age friendly'?