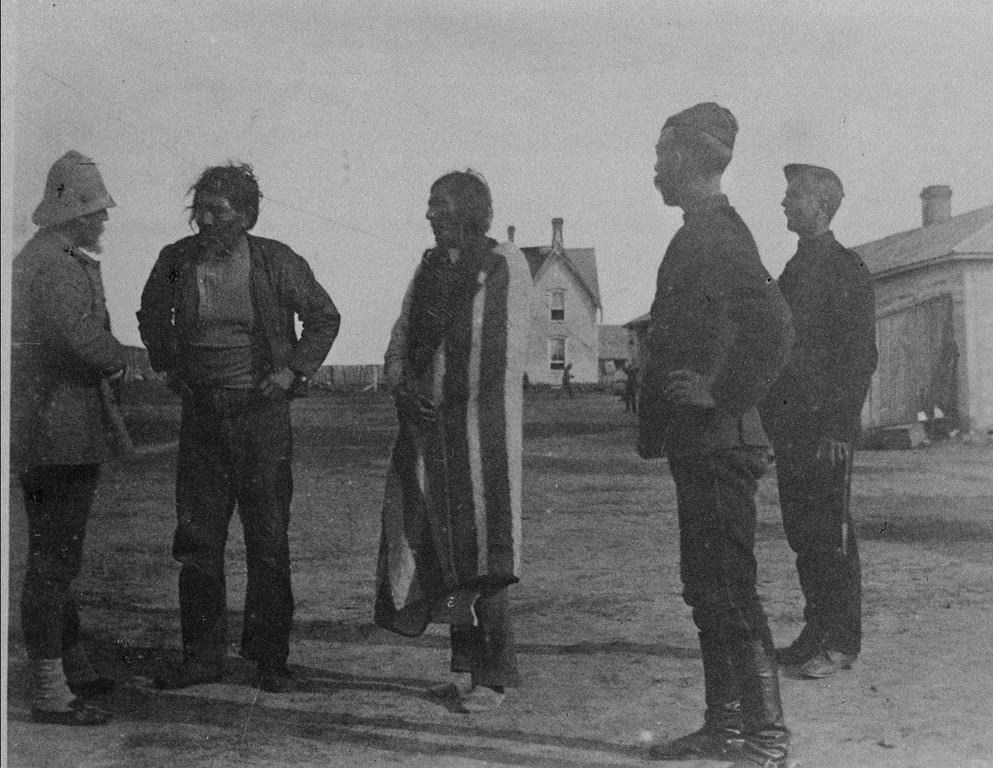 Prime Minister Justin Trudeau says Canadians need to learn the real story of a prominent Saskatchewan chief who was a peacemaker, not a criminal.

Trudeau set the record straight Thursday by fully exonerating Chief Poundmaker of treason after the Cree leader's conviction 134 years ago.

"In 1885, Chief Poundmaker was treated as a criminal and a traitor. In 2019, we recognize the truth," Trudeau told a crowd gathered at Poundmaker Cree Nation, about 200 kilometres northwest of Saskatoon.

"Our government acknowledges that Chief Poundmaker was a peacemaker who never stopped fighting for peace. A leader who, time and time again, sought to prevent further loss of life in the growing conflict in the Prairies."

The ceremony took place at the site of the 1885 Battle of Cut Knife Hill, and where Poundmaker's remains were later buried.

Trudeau arrived at the outdoor ceremony in a horse-drawn wagon, with some Indigenous leaders on horses, to the sounds of drumming, singing and cheering.

Hundreds of people sat on the grass and a makeshift stage. The crowd included Indigenous war veterans, elders, chiefs and young people, as well as federal politicians.

After the exoneration, Trudeau placed a pouch of tobacco at the chief's grave as a sign of respect.

"It's exciting, yet emotional," said Roxanne Tootoosis, who was born and raised on the Poundmaker reserve. "It's something I didn't feel I would witness in my life."

Tootoosis said she was six years old in the late 1960s when Poundmaker's remains were returned to the reserve. She didn't understand the significance of what she was watching then, but she does now.

Being at the exoneration is a story she will pass down to other generations.

"I can tell my grandchildren, my great-grandchildren," Tootoosis said. "I will be able to share with them this experience in my own way of what I witnessed, what I heard, what I saw."

Trudeau described Poundmaker as an early advocate for universal health care, as he fought for the federal government to live up to its Treaty 6 obligations that included providing medicine.

The chief and his people were later targeted by government representatives during the push to settle Western Canada.

On May 2, 1885, a Canadian expeditionary force attacked the reserve in retaliation for what it claimed was looting. Poundmaker said he and others had been gathering rations for his people, who were hungry because of declining bison herds.

The troops were forced to retreat in the battle, but Poundmaker convinced his people not to go after them.

Soon after, the prime minister said, the chief attempted to negotiate a peace agreement, but was arrested and convicted of treason. He was sent to a prison in Manitoba and released early because of poor health.

Duane Antoine, the current chief of Poundmaker Cree Nation, held his hand out to Trudeau on stage to recreate the historic failed peace negotiation.

"In peace," both men said as they clutched hands.

Past leaders of the reserve spent years trying to convince Ottawa that Poundmaker should be vindicated.

While the exoneration is important, Milton Tootoosis, a headman and councillor at the reserve, said the band still has grievances with the Crown over treaty implementation.

Chief Wayne Semaganis of the neighbouring Little Pine First Nation said the exoneration is only a first step. He wants to see Ottawa address more wrongs of the past, and the present.

"A day like today is going to mean nothing until we have more meetings, concrete meetings, with real results. So that the person living on the reserve, that lives in the sad way we live now, has a better quality of life," he said.

It's not the first time Trudeau has apologized for historical injustices involving Canada's Indigenous people.

Last year, Trudeau apologized to the Tsilhqot’in community in British Columbia for the hanging of six chiefs more than 150 years ago and delivered a statement of exoneration in the House of Commons.

Trudeau in Saskatchewan to exonerate Chief Poundmaker of treason