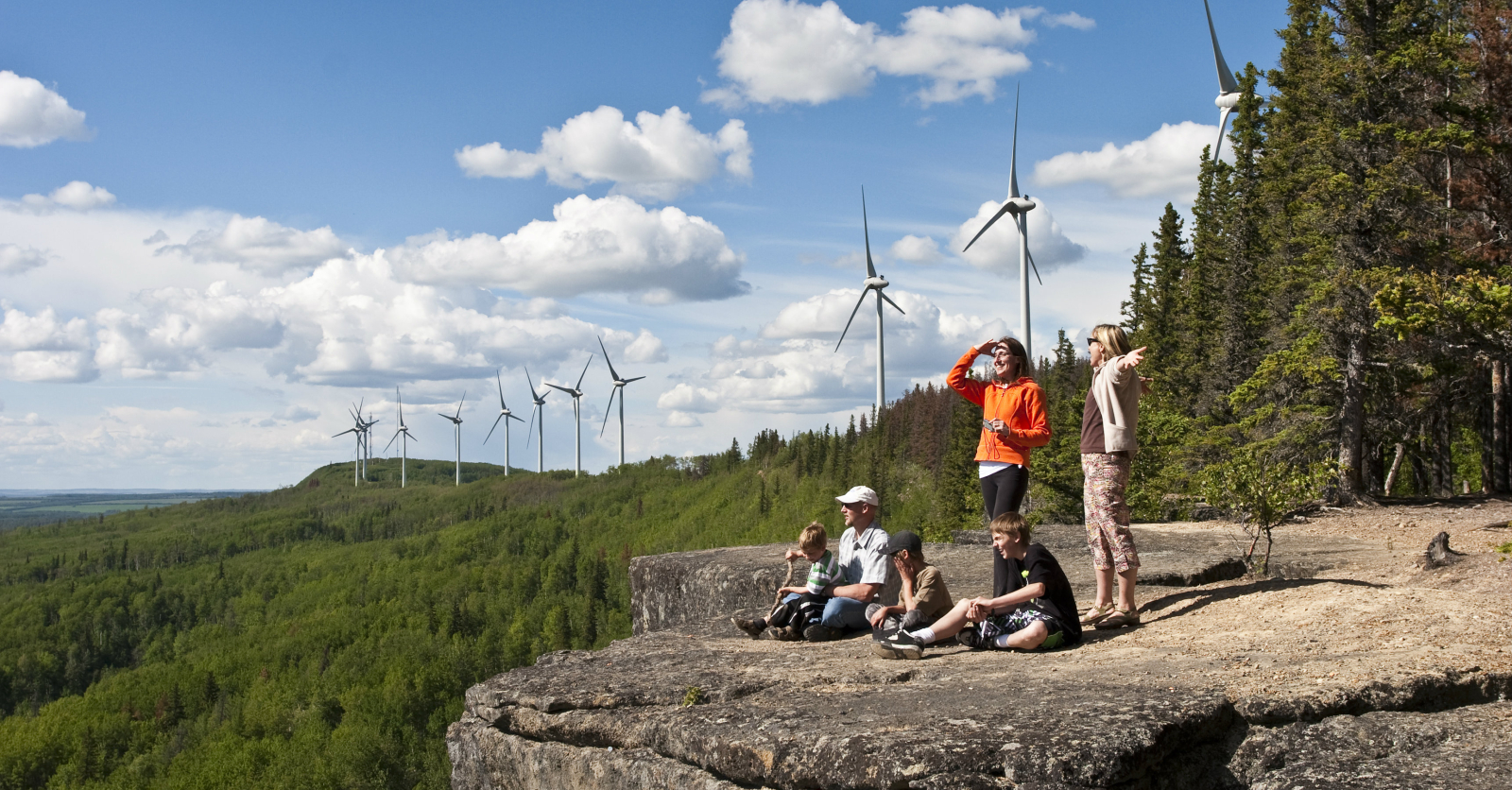 The Bear Mountain wind project in BC. Photo by Don Pettit
Previous story
Next story

In 1974, Don Pettit chased a dream a thousand kilometres north to Dawson Creek.

“I was living in Vancouver and not liking it much. I was kind of getting tired of big cities. And so we were looking in newspapers — my wife and I — and saw a little ad saying ‘Quarter section with lake and cabin, $7,000.’ So we jumped in our car and came up one spring.”

He admits with a chuckle that they never found the lake with the cabin. But what they did find, was “Silence. Beautiful crisp, pure air, rolling hills, big wide open skies. Beautiful blue skies. It had everything except crowds.”

A few months later they packed up their city life and moved into a nice little house in a “kind of cowboyish, really cool, really neat” town. He established a local photography and graphic design studio and built a career capturing images of the landscape he loved, touring and publishing best-selling books of landscape photographs.

Yet Pettit has noted intrusive, disturbing changes to those rural lands in the decades since he first arrived in Dawson Creek.

"Along with other early adopters of clean energy across the country, Don Pettit has helped lay the groundwork for an industry that now attracts tens of billions of investment dollars each year." Article by @Melissa_Lem

“Since then it’s been a steady stream of industrialization… but the biggest shift imaginable has been the arrival of the fracked gas industry. There’s flares blasting away, and they stink, and surveillance cameras with lots of ‘No Trespassing’ signs. Some of my favourite spots are essentially destroyed.”

He also describes a major shift in mentality that arrived with the oil and gas industry boom in the mid-2000s, from everybody helping everybody to transient workers and increasingly territorial, paranoid landowners.

“As a photographer I can’t just walk anywhere I want to go anymore. I’ve been kicked off of properties. I’ve been exploring just out my back door for decades, but now suddenly nobody wants you on their property.”

Along with his first love, photography, Pettit’s affair with environmental advocacy and renewable energy also has deep roots. In the 1980s he helped kick start a local recycling program and landed over half a million dollars in federal grant money for the Dawson Creek Restoration Project. Lobbying hard for pollution controls on Louisiana Pacific’s new chip board plant in the 1990s, he won the B.C. Minister’s Environmental Award in 1999.

In the meantime, his fascination with the elegance of solar energy grew. He bought one of the very first commercial solar panels available in Canada in the 1980s for his small cabin, and slowly built up the solar capacity of his own home. In 2003, a “wind rush” arrived on the mountains and foothills at his doorstep, leading him to co-found the Peace Energy Renewable Energy Cooperative (PEC) — now the oldest renewable energy co-op in western Canada.

“Wind prospectors were coming into the region from all over the world. We wanted to tap into that and try to make at least one of these wind facilities at least partially locally owned — which we did. And I think we set a very high standard for community-supported wind development.”

Their ground-breaking work led to PEC’s inaugural green energy project, the Bear Mountain Wind Park, being fully commissioned in 2009, even as fracking activity was peaking in the Peace. B.C.’s first large-scale wind park at 102 megawatts, it stands a few kilometres south of Dawson Creek and continues to power the South Peace region.

And then, in 2010, things inexplicably went south. BC Hydro suddenly suspended calls for renewable power for at least a decade — and to this day Pettit can’t fathom why, though he can’t help but wonder if it was linked to the provincial government’s push to expand fracking and develop the Site C dam.

“Everything was rolling along nicely. We could have had factories producing wind blades, and we were on the verge of launching a major wind industry with thousands of jobs in B.C.. But just as it started to get going they dropped it.”

That same year, the Site C Dam project was announced. Six years later, the Canadian Wind Energy Association finally pulled out of B.C. to seek better prospects in other provinces.

After the B.C. wind industry folded, PEC sharpened its focus on solar power. They solarized their office in Dawson Creek, making it electrically net-zero, and steadily grew their profile with publicity and education. Pettit was working as a volunteer at PEC’s office one day in 2016 when the phone rang.

“I got a call from the Chief Administrative Officer of Hudson’s Hope, saying, ‘We think we have a good chance at a large Federal Gas Tax grant, but we need some help.’”

Visionary then-mayor Gwen Johansson and town council decided to go ahead with the grant application. Within two weeks they had sent it off, and within a few months they were awarded $1.34 million to solarize as many of their municipal buildings as possible. Hudson’s Hope now boasts the largest municipal solar array in B.C., with current estimated savings of $75,000 in electricity costs per year — which will only increase as hydro rates continue to rise.

Along with other early adopters of clean energy across the country, Pettit has helped lay the groundwork for an industry that now attracts tens of billions of investment dollars each year. A report issued last week by Clean Energy Canada, entitled Missing the Bigger Picture, calculates that the renewable energy sector employed about 300,000 workers in Canada in 2017 and has significantly outcompeted the rest of the economy in growth.

The potential health benefits of a transition to renewable appear similarly impressive. A 2016 Pembina Institute analysis estimated that by phasing out coal-fired power entirely by 2030, 1,008 premature deaths, 871 ER visits and $5 billion worth of negative health outcomes would be avoided between 2015 and 2035. And unlike the air and water contaminants emitted by coal and natural-gas plants that sicken local populations and warm the planet, Pettit enthuses that solar energy has “no moving parts and no pollution.”

Two years ago he closed his photography business to become a full-time volunteer with the PEC as demand grew for its services. He now works as its executive director, designing solar arrays for local businesses and homes — complete with upgrades for their Teslas — that will zero out their electrical bills for the next few decades.

“People want it. They’re ready for renewable energy, solar, electric cars . It’s time… they know that we have to phase out carbon very quickly and one of the quickest ways to do it is to move rapidly to solar and wind.”

Still, Pettit points to how B.C. is lagging behind successful renewable-energy initiatives in Alberta and the Yukon — so much so, in fact, that Peace Energy is actively scouting out properties just across the border to build its first Co-op-owned solar farm. He would love to put Dawson Creek on the map again with a solar array, but says the province doesn’t want it.

“Alberta has a program called community capacity building. It’s about communities wanting to replace some of the power that they’re using with solar, but they can also make them bigger than they need and put extra power into the grid and get paid for it.”

One significant benefit is a locked-in energy price so communities can build business plans. No such program exists in B.C.. He makes it clear that he speaks as a private citizen, not for PEC, when he criticizes the current direction of energy in the province.

“We’re not green ever since fracked gas moved in. And now with Site C we’re destroying a beautiful river valley for 1,100 megawatts. We’re so rich in solar and wind energy, there’s no way we have to do what we’re doing. It’s just nuts.”

Many of Pettit’s friends and neighbours, fed up with these changes, have already moved south to the Lower Mainland but as an environmental advocate who is keen on being where he’s needed, he has no plans to follow suit. He is certain that the voices he and PEC raise, and the services they provide to the people of the Peace, are unique and essential.

The story of energy in the Peace is thus one of green islands in a river of fracked gas and dams. Galvanized by the success of Hudson’s Hope, however, Pettit believes that solar energy has tremendous potential to take off across the region. When asked what the provincial government could do to promote its spread, he answers without hesitation. Instead of spending billions on Site C to power the fracking industry, which he says would mostly benefit big corporations in the short term, it could offer small, targeted incentives.

“With a $5,000 subsidy the homeowner or business owner is more than happy to spring for the rest of the $15,000 to put up their solar array which means the province gets back a $15,000 investment in infrastructure. And so you’ve not only helped people directly and permanently with a small amount of money, but you also create a new industry — an industry that’s needed.”

What an inspiring, and on

What an inspiring, and on going story. Site C will never be forgotten nor will the NDP for adopting the Liberal Legacy. What a shame to be ruled over by the unimaginative brain dead.
You can only truly vote by involving oneself in the new world as shown how by Don Pettit.
Its like politics has become a mental illness.

Melissa Lem, why is no one

Melissa Lem, why is no one writing about http://www.ironandearth.org/?
These are former fossil fuel workers who see the writing on the wall.