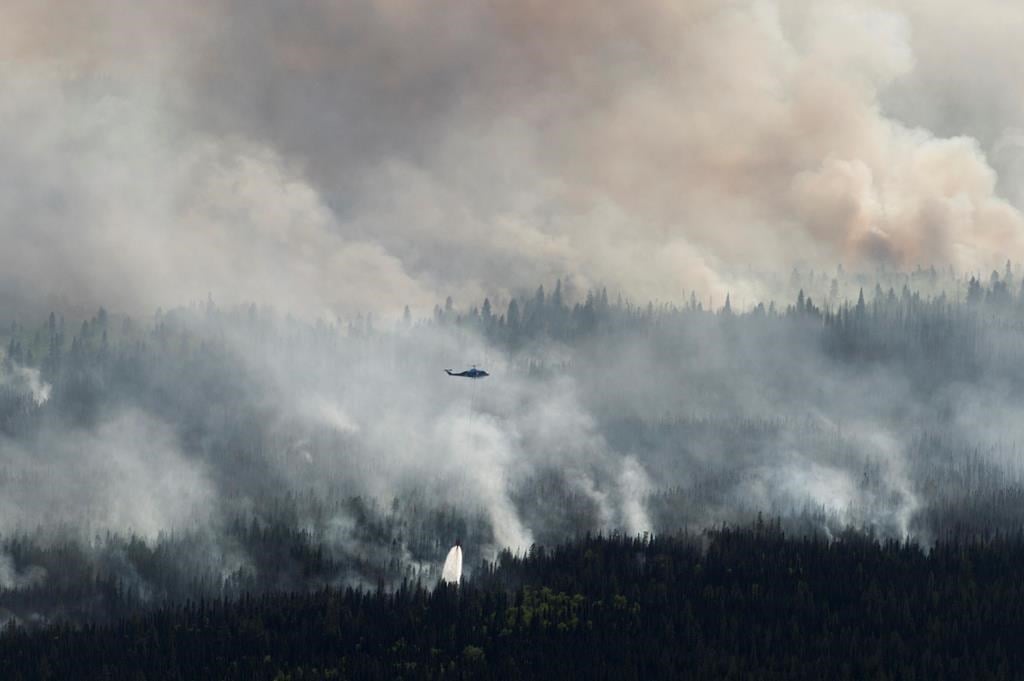 A helicopter drops a bucket of water on the Chuckegg Creek wildfire west of High Level, Alta., in a Saturday, May 25, 2019, handout photo. Handout photo by The Government of Alberta/Chris Schwarz
Previous story
Next story

A forest fire burning near a northern Alberta town has grown slightly, but officials say firefighters are making good progress.

The Chuckegg Creek fire, currently the largest in the province, was still about three kilometres southwest of High Level, where crews have been creating a firebreak to protect the community.

The province said the fire grew Tuesday to 1,300 square kilometres, up from 1,270 a day earlier.

"The winds have really been pushing from the south, southwest and the main part of the fire is spreading away from the town of High Level," Victoria Ostendorf, a wildfire information officer, said in High Level.

"The wind has been in our favour, allowing us to make great progress."

About 168 firefighters are working to protect homes and other properties in the area, while 420 firefighters aided by 28 helicopters are fighting the fire itself.

Ostendorf said the air quality in High Level has deteriorated due to smoke.

The wildfire danger in the area continues to be extreme due to warmer temperatures and no rainfall in the forecast.

About 5,000 people were ordered to leave High Level and surrounding communities eight days ago. Those evacuees have started to receive provincial emergency funds but have been told not to expect to return home before this weekend.

"Communication is ongoing every day, always reassessing the situation to finally get to that point where it's ... safe for residents to come back to the town of High Level," said Ostendorf. "Another stipulation is that essential services would be back up and running and, of course, air quality would be improved.

"Hopefully the time will come soon where we can see residents back in town, but unfortunately we'll have to wait and see for that," she added.

The government said to date, it has provided more than $4.9 million in one-time, emergency support payments to evacuees.

Albertans who qualify can receive $1,250 for each adult and $500 for each dependent child.

Officials said in a Tuesday morning update that there's a second out-of-control wildfire in the High Level forest area and fire lookout observers were watching carefully for new ones.

There was a total of six out-of-control fires burning Tuesday in northern Alberta.