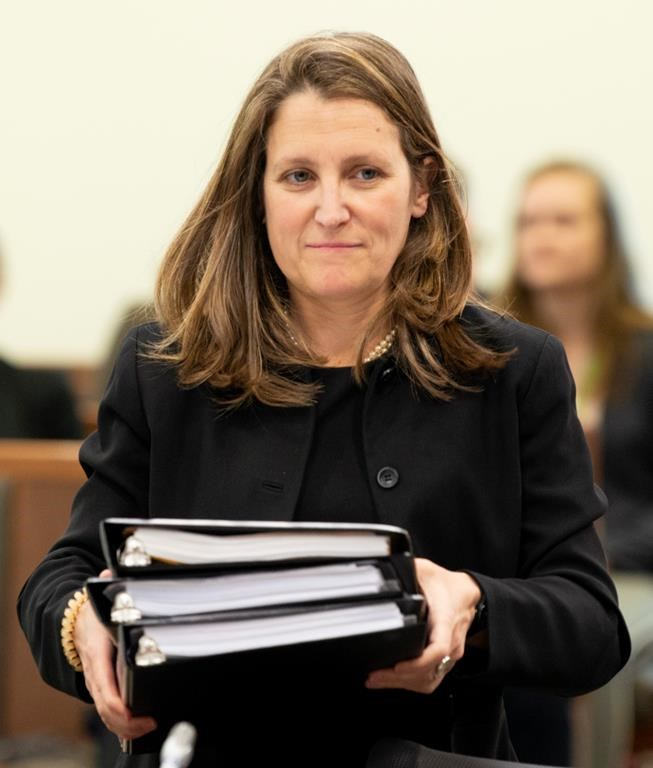 Foreign Affairs Minister Chrystia Freeland waits to appear before the Standing Committee on Foreign Affairs and International Development in Ottawa, on Tuesday, May 28, 2019. Photo by The Canadian Press/Adrian Wyld
Previous story
Next story

The call never happened, but Freeland was to talk to State Councillor Yang Jiechi, the director of the party's political bureau, on Dec. 20, 10 days after Canadians Michael Kovrig and Michael Spavor were arrested on unspecified national-security charges.

The two men remain imprisoned, without access to lawyers or their families, and are receiving consular visits by Canadian diplomats roughly once a month.

Meng was arrested in Vancouver on an extradition warrant from the United States and is now under house arrest in a mansion after being released on bail.

Meng's arrest incensed China, plunging relations with Canada to an all-time low and sparking numerous allegations that Canada's actions were unlawful or part of a politically motivated play at the behest of the Trump administration in the U.S.

Freeland and her fellow cabinet ministers have steadfastly said Meng's arrest is lawful and her rights are being protected. They say she is part of a judicial proceeding that is divorced from political manoeuvring.

One week before the scheduled call, Lu Shaye, China's ambassador to Canada, called Meng's arrest a "miscarriage of justice" in an opinion column published by the Globe and Mail newspaper.

A briefing note prepared for Freeland's call to Yang suggests that privately the government was bristling at China's depiction that Meng's legal rights were somehow in peril in Canada.

"Urge China to desist from inaccurate portrayals of Canada's judicial process and treatment of Ms. Meng," the memorandum states as a main objective after advocating for Kovrig's and Spavor's "immediate release."

"As the international community looks on, urge China not to damage bilateral relationship, over a single consular case however high profile."

The note, released under the Access to Information Act, urges Freeland to deliver a key message: Canada is treating Meng better than Kovrig and Spavor.

"Ms. Meng received consular access, due process, legal counsel and health care since day of arrest," the memo says, and she "continues to be treated fairly by Canadian judicial system; we urge China to grant the same standards for Mr. Kovrig and Mr. Spavor.

"It is important to understand that under the Canadian legal system and Constitution there can be no political interference in the judicial process."

In January, Lu doubled down in another op-ed, this time in the Hill Times newspaper, writing that China was the victim of a double standard from the U.S. and Britain.

"The reason why some people are used to arrogantly adopting double standards is due to Western egotism and white supremacy," Lu wrote. "What they have been doing is not showing respect for the rule of law, but mocking and trampling the rule of law."

The December memo to Freeland is also prefaced with another problem that Canada continues to face: her inability to get her Chinese counterpart to talk to her.

"In the absence of Foreign Minister Wang Yi, you have requested a call with State Counsellor Yang Jiechi," the memo says.

On Tuesday, Freeland told the House of Commons foreign-affairs committee that she's still waiting to speak to Wang.

"When it comes to my contacts with my Chinese counterparts, I have spoken on a few occasions directly with the Chinese ambassador to Canada," Freeland said.

Canada isn't the only country that has dealt with the Chinese government's practice of holding off on meetings "at the highest levels," she added.

Freeland also praised Kovrig and Spavor for their courage and resourcefulness while in custody.