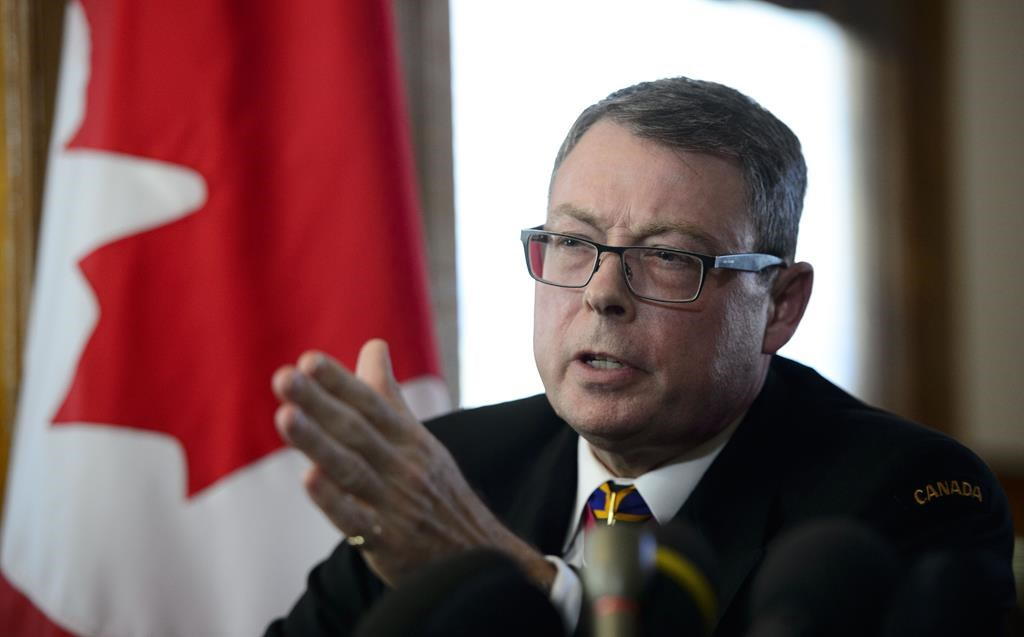 Vice Admiral Mark Norman reacts during a press conference in Ottawa on Wednesday, May 8, 2019. The charges against Norman were dropped. File photo by The Canadian Press/Sean Kilpatrick
Previous story
Next story

Vice-Admiral Mark Norman and defence chief Gen. Jonathan Vance are being given "their privacy and their space," Defence Minister Harjit Sajjan insisted Wednesday as he was grilled over why Norman has not yet been reinstated into the military.

Sajjan sidestepped questions over whether the Trudeau government has an opinion on Norman's desire to return to duty after the breach-of-trust case against him was dropped earlier this month.

Norman was the military's second-in-command when he was suspended and then charged with breach of trust last year for allegedly leaking government secrets about a naval contract.

Crown prosecutors stayed the case May 8 after Norman's lawyers unearthed new information, at which point Norman said he wanted to return to work. Vance issued a statement that same day saying the military was ready to welcome him back.

Yet while Vance and Norman had what the Defence Department described as a "cordial" meeting last week, there has been no word on when Norman will return to duty, or in what role. His former post has been permanently filled and the Canadian Forces has no other job of equivalent stature.

Sajjan suggested the matter is out of the government's hands and instead rests completely with Vance and Norman.

"We need to respect and to give them that space to have that conversation," he said. "And yes, they have had a meeting and now it's up to them to go through their discussion, give them their privacy and a decision will be made on this regard."

Adding to the drama, the Senate's defence committee voted on Tuesday night to launch an inquiry into why the charge against Norman was laid and subsequently stayed, with invitations planned for Norman, Vance, Sajjan and others.

Conservatives, who allege Prime Minister Justin Trudeau politically interfered with the case, tried to get the House of Commons defence committee to initiate an investigation into the matter but the Liberals used their majority to block that effort.

Conservatives had better luck Tuesday with the Senate committee, passing a motion with the support of Independent Sen. Diane Griffin and non-affiliated Sen. David Adams Richards (the Senate's "Independents" collaborate for certain purposes under the Senate's procedural rules; a smaller number of "non-affiliated" senators don't).

Sajjan said he is prepared to appear before the committee, noting he recently responded to four hours of questions in the House of Commons during an unusual evening session, with many of them focused on the Norman case.

Norman's lawyers repeatedly accused the Liberals of political interference in the RCMP investigation and court case before it was dropped, allegations that Sajjan and the government denied.

"I have been clear from the beginning on this that the entire process has been independent and it's very important in our democracy to making sure that the process takes its course all the way from investigation to the legal process," he said.

"And that's exactly what has been done."