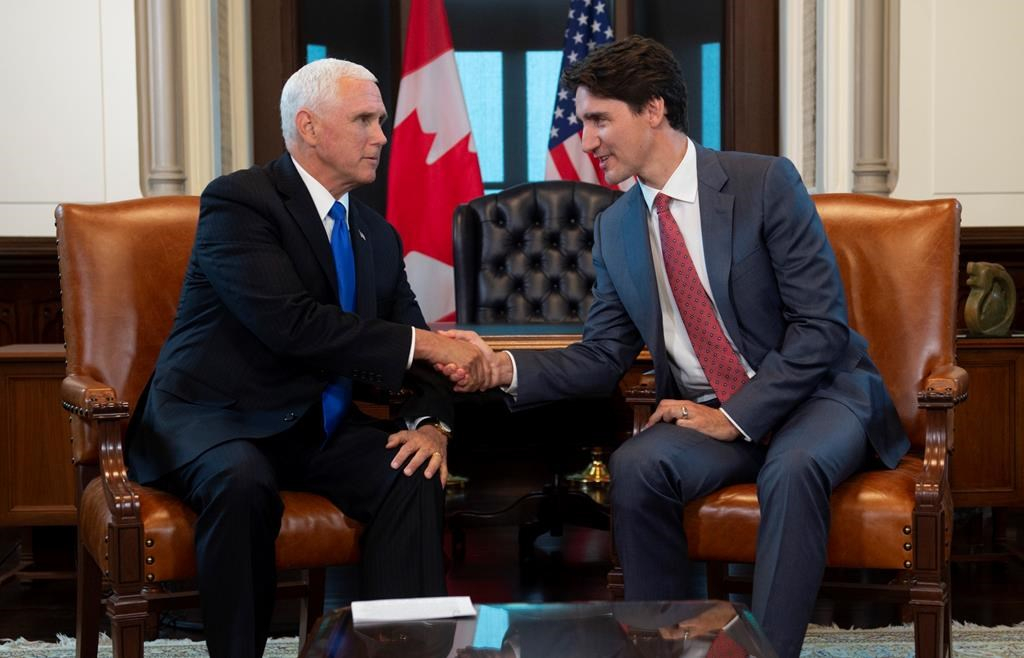 Canadian Prime Minister Justin Trudeau meets with U.S. Vice-President Mike Pence in his office on Parliament Hill in Ottawa, on Thursday, May 30, 2019. Photo by The Canadian Press/Adrian Wyld
Previous story
Next story

The United States will link the liberation of the two Canadians imprisoned by China to its free-trade talks with the People's Republic, U.S. Vice-President Mike Pence pledged Thursday.

Standing next to Prime Minister Justin Trudeau, Pence also called again on China to release Michael Kovrig and Michael Spavor from their "unlawful detention" in the boldest and most tangible gesture of solidarity on a visit that was clearly meant to be a balm on the hurt feelings between the two North American neighbours.

The former Indiana governor came to Ottawa Thursday bearing a figurative hug on behalf of a combative president who has insulted the prime minister, taxed Canada's metals as a national-security threat and accused Canadian farmers of unfairly impoverishing their American counterparts.

Pence's whirlwind visit to the Canadian capital was a sea change from U.S. President Donald Trump's bitter departure from the G7 summit in Quebec almost one year ago, when he tweeted as he flew home that Trudeau was "very dishonest and weak."

Pence said Trump would push Chinese President Xi Jinping on Kovrig and Spavor at next month's G20 summit, while he sidestepped an argument over the diametrically opposed opinions he and Trudeau have on abortion.

He also gave Trudeau some domestic political cover against his Conservative opponents, who say the Liberals gave in to Trump and got a bad deal for Canada on the renegotiation of the North American Free Trade Agreement.

"I want to assure the people of Canada that the prime minister drove a hard bargain, as did our president," he said. "I want to assure you that we're making energetic efforts to move the approval through the Congress of the United States this summer."

Pence repeatedly emphasized his government's effort to get the new U.S.-Mexico-Canada Agreement through Congress before the summer recess. Giving momentum to the ratification of the USMCA, as the U.S. calls it, was the main reason for Pence's visit, one day after the Liberals introduced ratification legislation in the House of Commons.

But later Thursday, in a surprise announcement that could compromise the trade deal, Trump said that he will slap a five per cent tariff on all Mexican imports to pressure the country to do more to crack down on the surge of Central American migrants trying to cross the border.

He said the percentage will gradually increase "until the Illegal Immigration problem is remedied."

"Tariffs will permanently remain at the 25 per cent level unless and until Mexico substantially stops the illegal inflow of aliens coming through its territory," the White House said in a statement.

Pence said he also had "extensive discussions" with Trudeau over the detained Canadians as their meeting went more than half an hour longer than scheduled. The pair continues to languish in Chinese custody, on allegations of espionage, although their plight is widely seen as retribution for the detention last December of tech scion and Huawei chief financial officer Meng Wangzhou, whom Canada arrested on an extradition request by the U.S.

The Chinese have rebuffed Foreign Affairs Minister Chrystia Freeland's repeated attempts to speak with her counterpart in Beijing. But Trump will speak directly to Xi at the G20 in Japan next month.

"We are in the midst of significant discussions over our trading relationships but I can assure you in that context going forward we're going to continue to urge China to release the Canadian citizens even while we deal with larger economic and structural issues between the United States and China," Pence said.

"We are standing with Canada in this effort. We respect and are grateful for the strong stand for the rule of law that Canada has taken with regard to the Huawei executive."

The divisive abortion question was also on Thursday's agenda after Trudeau said Wednesday he is concerned about how women's rights have been affected by conservative movements in Canada, in the U.S. and around the world.

Trudeau said he told Pence he is concerned about "the anti-choice laws in the U.S." and that his government remains a staunch defender of a woman's right to choose. The prime minister said the conversation was "cordial."

Pence said one of the great things about the Canada-U.S. relationship is the ability "to be candid with one another."

He said it's up to Canadians to decide how they feel about the issue, but he made it clear where his government stands.

"I am very proud to be part of a pro-life administration," Pence said, describing his conversation with Trudeau as respectful.

"Friends can have differences of opinion and still be friends."

Another key foreign-policy difference was on display between the two: Pence called Cuba a "malign influence" in the ongoing crisis in Venezuela, for its continued support of President Nicolas Maduro. Canada and the U.S. view him as a dictator with an illegitimate hold on power, and who must give way to opposition leader Juan Guaido as the country's interim president.

When it comes to Cuba, Trudeau said Canada and the U.S. have "different perspectives" but "a shared goal" of restoring democracy to Venezuela. He said Canada and its Western Hemisphere allies in the Lima Group are talking with Cuba about playing a more "positive role" in Venezuela's future.

Pence said he spoke to Trump shortly before his arrival and the president told him to send his best.

"President Trump and I believe the relationship between the United States and Canada has never been stronger, and that is a reflection of his leadership, your leadership and the bonds that have been forged through the generations by those who have served in uniform, shoulder to shoulder," Pence said to Trudeau after signing the guest book in the House of Commons foyer.

The new trade deal doesn't come into force until ratified by Canada, the U.S. and Mexico, and it's the politically volatile U.S. that remains the wild card. Indeed, even as Pence was touching down in Ottawa, Democratic opposition was once again rearing its head.

"While the Canadians rush to approve this deal, Congressional Democrats remain committed to making key changes to the core of the agreement that will include strong labour and environmental standards and enforcement and remove the monopoly rights for Big Pharma," said Rep. Rosa DeLauro, a Connecticut Democrat opposed to the agreement.

"These key changes must be included in the text of the agreement in order for it to be considered in Congress. I encourage my colleagues in Canada to address these critical issues before passing the agreement."

Trudeau reiterated the Canadian view that the deal is done, and not open to further negotiation.

— With file from AP