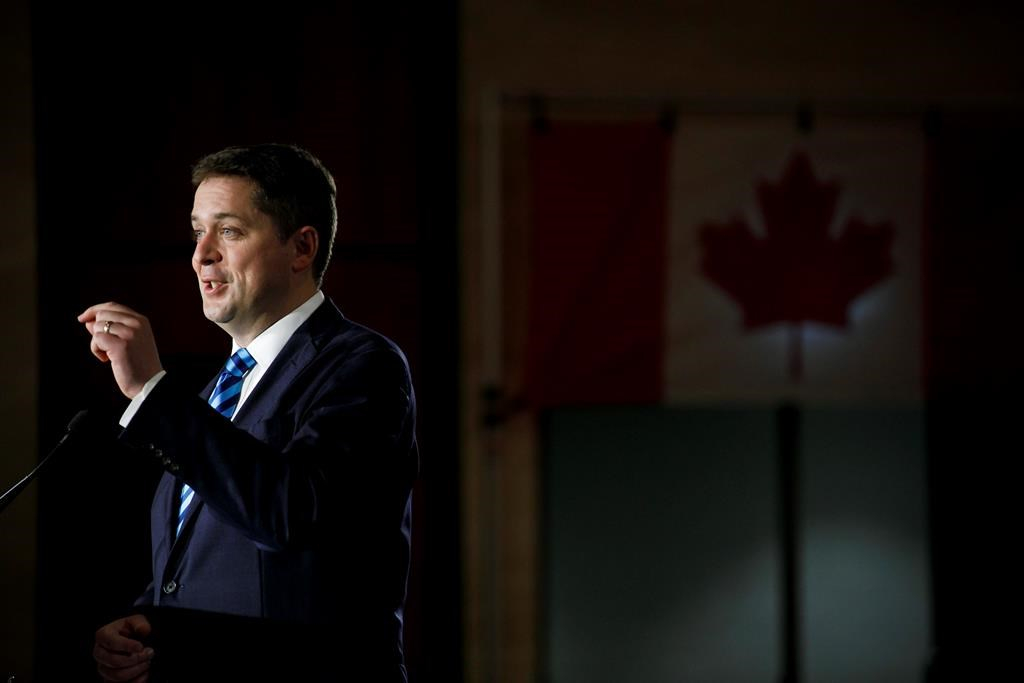 Conservative Party of Canada leader Andrew Scheer announces his immigration policy at an event hall in Toronto, on Tuesday, May 28, 2019. File photo by The Canadian Press/Cole Burston
Previous story
Next story

Speaking to municipal leaders at a convention in Quebec City, the opposition leader said opioid addiction and overdoses are both a health problem and a public-safety problem, and part of the solution is to restrict the supply.

"The main source of illicit fentanyl coming into Canada is from China by containers and through the mail and the majority of it is destined to B.C.," Scheer said. "Now, obviously Canada must stop this flow of fentanyl into Canada. This is all the more urgent since sources have clearly indicated that the issue of imported fentanyl from China will get worse before it gets better. So the government must take real action to hold China accountable for this phenomenon."

Fentanyl is more powerful than morphine or heroin and can be transported, cut with other substances, and sold as supposedly less potent than its drug cousins. But because it's so strong, a very little extra can mean a lethal overdose.

At the beginning of May, under pressure from the United States, China designated all varieties of fentanyl as controlled substances, adding some slight chemical variants of the drug to its existing regulations.

The two countries' relationship is just about the worst it's ever been, with two Canadians in custody there on charges of undermining Chinese national security, in apparent retaliation for Canada's arrest of Huawei Technologies executive Meng Wanzhou on a U.S. extradition warrant for alleged bank fraud. China has been obstructing Canadian agriculture products and Canada's government is wrestling with whether to allow Huawei products to be used in next-generation wireless networks, fearing that they might enable Chinese espionage.

Canada is working on the issue of Chinese fentanyl, Global Affairs Canada said, without details.

"Fentanyl is an issue that is raised regularly with Chinese officials through our embassy of Canada to China," said spokesman Guillaume Berube. "Canada is committed to working constructively with Chinese counterparts to address the flow of synthetic opioids from China into Canada, in particular, fentanyl. "

A spokesman for Public Safety Minister Ralph Goodale said the RCMP works with Chinese authorities to disrupt fentanyl exports, under an agreement renewed in 2016.

"The force continues to work together to combat the flow of illicit fentanyl and other opioids into Canada, including exchanging information and investigative leads," Scott Bardsley said in an email.

He pointed out a legal change in 2017 that tightened controls on pill presses — used to make counterfeit pills that look like ones with reliable dosages, manufactured by real pharmaceutical companies — and gave border-security agents the authority to open international mail if they suspect it includes drugs. And he noted $350 million the Liberals have spent on public-health responses to drug use.

Besides calling for a tough attitude toward China, Scheer promised the Conservatives will have "a comprehensive recovery oriented plan to tackle Canada's addictions crisis," which drew applause from the mayors and councillors. Municipal-level police, paramedics and public-health units do much of the front-line work responding to drug use and overdoses.

Health Canada says 10,300 people died in Canada of apparent opioid overdoses between January 2016 and September 2018, when the most recent figures end. A Statistics Canada report released Thursday said life expectancies in the country failed to rise for the first time in four decades in 2017, with opioid deaths that killed younger people the primary culprit.