'Praying to God:' Man sings gospel as he watches his home burn in Alberta fire 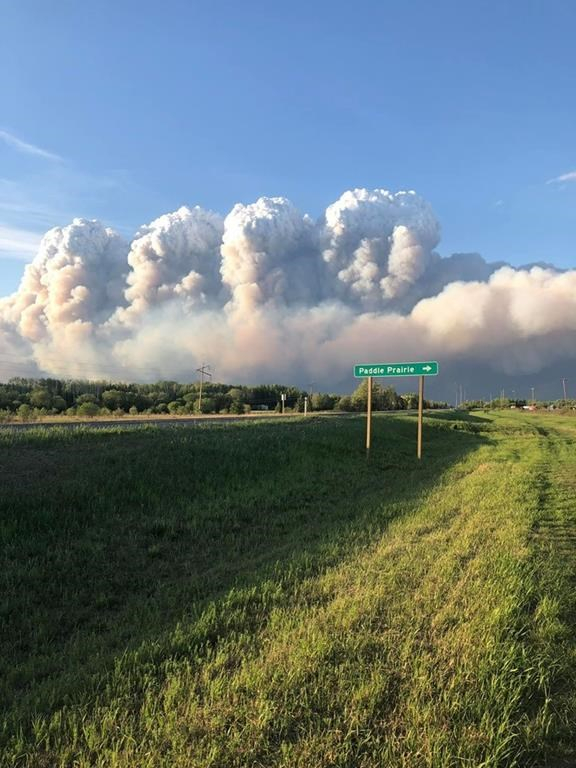 Pudgin Wanuch knew there was nothing he could do as he watched the out-of-control wildfire consume the only home he'd ever known.

So he parked his truck outside the church in the evacuated northern Alberta settlement of Paddle Prairie, pulled out his guitar, sat on the tailgate and sang.

"I knew exactly where my house was," Wanuch said from a hotel room in Grande Prairie. "I knew my house was gone.

"So I sang some spiritual gospel songs.

"I was praying to God, to give my family and community ... to put more faith in 'em."

Wanuch's home — built by his father and brother, flanked by the homemade hockey rink and baseball backstop he'd put up for his kids — was one of several homes in the Metis community destroyed by fire this week.

Fires have forced more than 10,000 people out of their homes in the northern part of the province, with Trout Lake being the latest of more than a dozen communities to stand empty Friday.

The flames are also affecting oil production. Canadian Natural Resources Limited announced it has evacuated 240 staff from facilities at Pelican Lake and Woodenhouse as a precaution.

"Accordingly, Canadian Natural has completed the safe, temporary shut-in of approximately 65,000 bbl/d (barrels per day) of crude oil production," the company said in a release.

The first reports of destruction came from Paddle Prairie, about 70 kilometres south of High Level.

"It's like a burnt piece of toast up there," said Blake Desjarlais of the Metis Settlements General Council.

Desjarlais said that although the community itself was safe as of Friday morning, at least 15 houses on the outskirts and two community structures burned. Bison and cattle ranchers had to turn their animals loose.

"We were right up to the fire, getting horses out of corrals, releasing them, let them be free. Nobody was allowed in, so you couldn't get horse trailers. All we could do is try to get the horses in the open fields.

"The fire was creating its own weather pattern. You could hear the fire roaring and the winds were circling and blowing and the clouds, you could see them billowing purple, red, white, black.

"I could see my neighbour's house ignite. It was like hell."

Across Alberta, there were 29 active fires and 10 were considered out-of-control Friday.

The largest wildfire in the province, the Chuckegg Creek fire — the one that claimed Wanuch's home — had grown to 2,600 square kilometres as of Friday. The same fire forced 4,000 High Level residents out of their homes more than a week ago, and they're still waiting to return.

People in Slave Lake, a town of 6,500 that was partially destroyed in a 2011 blaze, were told to be prepared to leave with eight hours notice because of a different fire that the mayor said was burning about 30 kilometres away as of Thursday. That fire had grown to 1,800 square kilometres Friday.

Smoke from the fires enveloped points south in a thick, acrid, haze that limited visibility and made it difficult to breathe. It even drifted into five U.S. states — Montana, North Dakota, South Dakota, Washington and Wyoming. Air quality in three Montana cities was rated unhealthy Friday morning.

The Alberta government has warned weather forecasts for the next two weeks suggest fighting the fires could be difficult. Firefighters were in the province from across Canada doing their best to corral the flames.

The province was slightly under the five-year average for number of fires. But the amount of land burned is more than 3.5 times higher.

Alberta Premier Jason Kenney acknowledged Friday that climate change plays a role in wildfires. But Kenney, who repealed the province's carbon tax this week, shrugged off criticism that Alberta is doing less to fight climate change.

"They've had a carbon tax in British Columbia for 10 years. It hasn't made a difference to the pattern of forest fires there ... or in Alberta," Kenney said.

"We've always had forest fires, we always will."

Back in his hotel in Grande Prairie, Wanuch couldn't help but reflect on his home, now little more than ash.

"I spent 52 years of my life there. I was born and raised there," he said.

"I laid back and thought of all that had happened in my life. I never thought I'd see that day."

— With files from Ken Trimble in Edmonton, Bill Graveland in Calgary, CKRM and The Associated Press.