We'll work with cities, even when provinces won't work with Ottawa: Trudeau 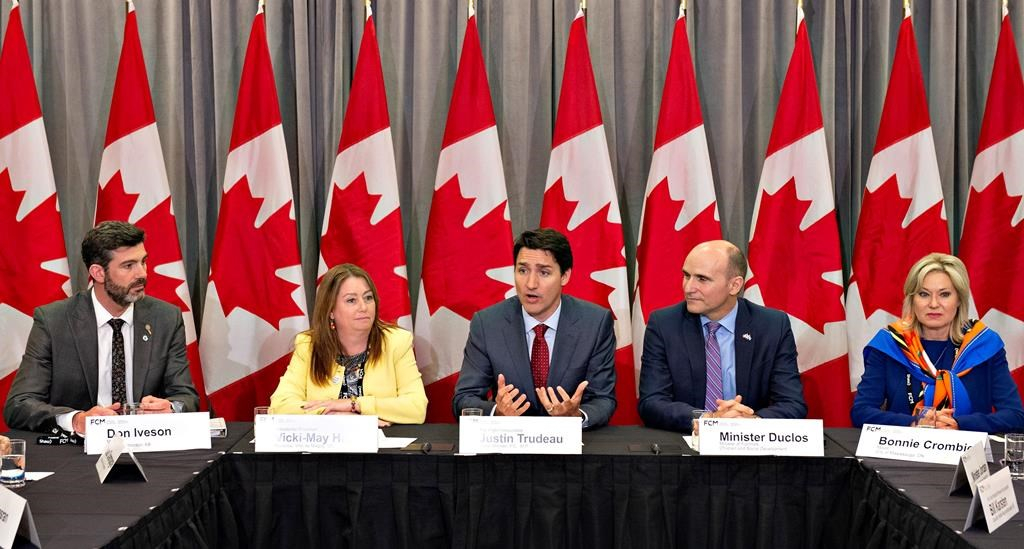 Prime Minister Justin Trudeau, centre, speaks during a roundtable discussion with municipal leaders at the Federation of Canadian Municipalities annual conference, on Friday, May 31, 2019 in Quebec City. Photo by the Canadian Press/Jacques Boissinot
Previous story
Next story

Even with provinces and Ottawa not always seeing eye-to-eye these days, Prime Minister Justin Trudeau pledged Friday that his federal Liberal government would keep working with municipalities to deal with the effects of extreme weather, housing shortages and climate change.

In a speech to members of the Federation of Canadian Municipalities with an election-style tone, Trudeau also warned those gathered against Conservative policies.

"We are an election away from going back to the days when austerity was the federal government's only policy," Trudeau said. "We've seen conservative politicians do this before, so we can't act surprised when we see them do it again."

His speech came ahead of Conservative Leader Andrew Scheer's own address to the gathering of mayors and councillors later Friday.

Trudeau said the actions of provincial conservative governments show how far they're willing to go to pursue small-government ideology.

"Premier Ford is playing politics with money that belongs to your communities and your citizens are paying the price," Trudeau added.

This week, the Ford government cancelled retroactive funding cuts to municipalities, but Trudeau said he's not convinced the Ontario premier has really heard what local lawmakers are telling him.

In a statement, McNaughton said 54 projects have been submitted to the federal government — critical work that includes $28.6 billion in road, bridge and transit projects that have yet to be approved by Ottawa.

"The federal government has said Ontario's priorities are their priorities," McNaughton wrote. "It's time Prime Minister Trudeau put his money where his mouth is."

Trudeau said his government has pushed ahead on more projects than the previous Conservative government did. While he said he'd prefer to co-operate with provincial governments, Trudeau said he is committed find a way to get funding to municipalities if the provinces don't want to play ball.

He pointed to a one-time measure in the latest federal budget that doubles the federal gas-tax transfer to help municipalities with infrastructure work this year.

"We got elected on a very clear promise to collaborate, to work together, to believe in co-operative federalism," Trudeau said. "But if the provinces don't want to work with the federal government and municipalities on infrastructure, we'll figure out ways ... of working with you, getting shovels in the ground."

He says extreme weather events like flooding, forest fires and droughts are rapidly becoming the norm, worsening a housing shortage that's being felt across the country.

Trudeau repeated that home ownership should remain a realistic goal, not an unattainable dream.

He says his government has a plan to deal with climate change and that politicians of all stripes mustn't close their eyes to what is happening around them.