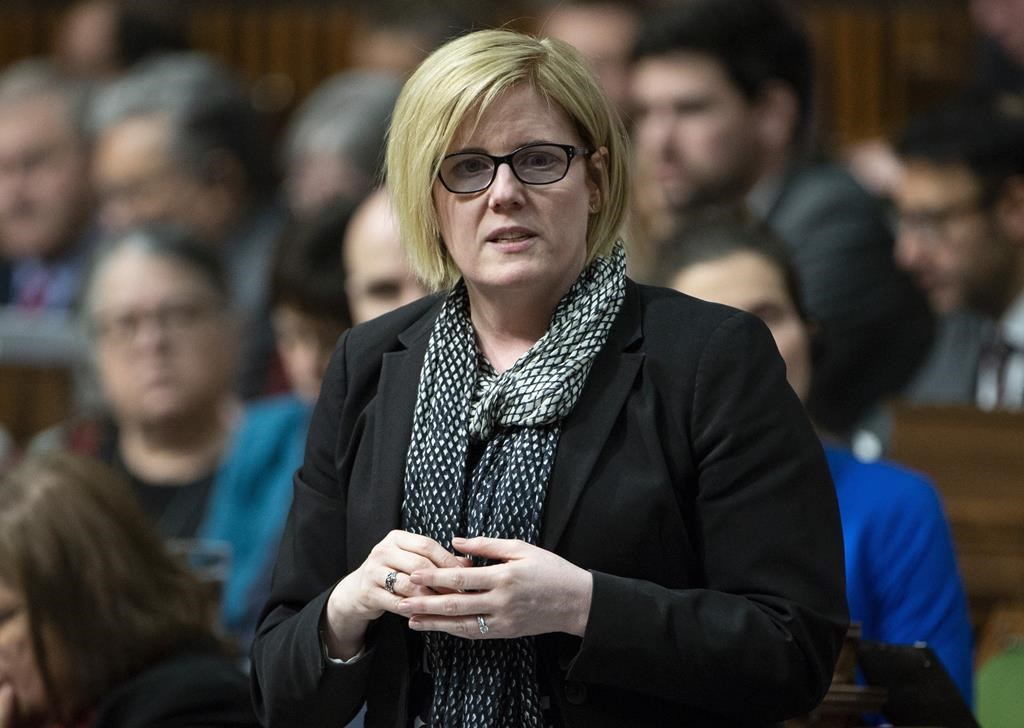 Public Services and Procurement Minister Carla Qualtrough responds to a question during Question Period in the House of Commons Tuesday, February 26, 2019 in Ottawa. File photo by The Canadian Press/Adrian Wyld
Previous story

That's because none of the 18 vessels the government announced last week that it plans to buy will be an icebreaker, meaning the coast guard will be forced to continue relying on its existing icebreaker fleet for the foreseeable future.

Many of those are nearing — or have already exceeded — their expected lifespans, which has resulted in breakdowns and other problems that have affected coast-guard operations, such as resupply runs and assisting ferries in winter.

Federal procurement minister Carla Qualtrough acknowledged on the sidelines of the annual Cansec arms-trade show this week "there's definitely a capability gap on icebreakers," but wouldn't say when it would be addressed.

Qualtrough instead indicated that any announcement on more ships for the coast guard would likely come after the government adds a third shipyard to the two that are already partners in the federal shipbuilding plan.

"There's definitely more ships coming," she said on Thursday. "It will really be dependent on how long it takes the third yard to get itself ready to build the kind of ships we need."

The search is expected to start in the coming weeks, but while many observers expect Davie Shipbuilding in Quebec City to emerge victorious, a senior government official maintained a decision is unlikely before October's election.

But those vessels are what officials describe as "ice-capable," rather than icebreakers, meaning the coast guard will need to continue to rely on its existing fleet for many of its operations.

The icebreaker fleet did receive a boost on Thursday, when the Canadian Coast Guard officially welcomed the CCGS Molly Kool to its ranks after several months of conversion work at Davie.

The CCGS Molly Kool is the first of three second-hand icebreakers that Davie has sold to the government, which the coast guard has said it plans to use for the next 15 to 20 years to fill any gaps until replacements are built.

But while the government is spending millions to refit its current icebreakers, which are on average 35 years old, and keep them running as long as possible, the question remains when those replacements will arrive.

The only new icebreaker currently in the government's multibillion-dollar shipbuilding plan is the polar-class CCGS John G. Diefenbaker, which was expected in 2017 before various delays pushed it back to the next decade.

"We haven't built a coast guard-designed icebreaker since 1983. That was the last time," said Rob Huebert, an expert on the coast guard at the University of Calgary. "And anything we have bought is usually second-hand from industry."

The coast guard doesn't have clout in Ottawa, Huebert said, which has translated into a lack of long-term planning or investment by successive governments — except when there are political points to be scored.

And while the addition of a third yard to the federal shipbuilding plan should mean icebreakers will follow soon after, Huebert said it is all ad hoc and will simply lead to the same problems down the road.

"I get incensed by the fact that we do not have any form of a long-term coast-guard renewal for icebreakers."

Documents obtained by The Canadian Press warned more than a third of the coast guard's 26 large vessels, including its icebreakers, had exceeded their expected lifespans — and that many wouldn't survive until replacements arrived.

The fleet's advanced age was also already affecting the coast guard's ability to do its job, including reduced search-and-rescue coverage, ferry-service disruptions and cancelled resupply runs to Arctic and coastal communities.